Last week I wrote about my wheels and tires that were going back on the OS Bikes Blackbuck. (Seen here) Now I've had the wheels and tires out on a few brief rides and it's like "old home week" again. The transformation back to the "old days" of this bike is nearly complete.

There was a time that I had the ol' Blackbuck darn near refined to perfection, and then I went and sullied the set up with swaps to new parts and wheels. What a mistake. The bike was never close to the fun, always ready to shred state it was back around 2008-2009.

But now I've begun to take the bike "backwards" in time to when I thought it worked really well. Back to before the days when 29"er geometry went to where it has gone now. You could say "old school" 29"er geometry, but these bikes haven't been around all that long, so I think that term overstates the case a bit. Anyway, here is a breakdown of the bike and why it is a throwback of sorts.
Unfortunately, Salsa quit making these Gordo rims. Salsa Cycles was adamant that these were never to be run tubeless, but they work really, really well tubeless. At least these "first run" Gordos do. (I've heard later ones weren't as nice, for some reason or another.) Anyway, these are set up tubeless and have been run that way for quite awhile with other tires. 35mm wide, (outer dimension), is really great for these tires I am using now. It really "poofs" them out, and the ol' Blackbuck couldn't take anything larger without creating issues.

The Kenda Honey Badgers are great Mid-Western trail tires. Fast, but grippy, and on the big rims, they get a lot of the tread down on the trail. Great for traction! But they still roll really free too. The combination is holding air like a champ, and these get me right back where I had the best feelings in 2008 with this bike. I could experiment with other tires, but why? As of now, I see no reasons to take these off, and I am afraid that I'll just go backward on the set up if I do. 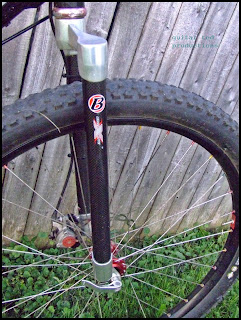 The fork is the other thing that does the trick with the Blackbuck's approximately 72° head angle with this axle to crown length, (468mm). The trail figure goes back up with the Switchblade's 38mm offset. This is where a lot of early 29"ers were with geometry up front back in 2005-2008. The idea was to get the 29"ers to handle more like 26"ers, but since this time, everything has gone slacker in the head angle and uses longer offsets. While trail figures may be similar, the wheelbases have grown, and that affects how bikes track through corners.

To my mind, there isn't one "better" than the other, but I happen to like the "older" set up this particular bike has on it now. It zips right around a corner and with the shorter wheelbase, I can maneuver it in an easier fashion. This includes wheelies, hopping, and whatnot. You may note that the saddle is just about over the rear axle. This is because the Blackbuck has an unconventional seat tube angle that is the same as the head tube angle. This has the effect of making the bike feel and act like it has super-short chain stays, when it really doesn't.

So, in the end, little weight shifts make a big difference on this bike. Rearward or forward, and the Blackbuck responds more quickly and with less effort than other bikes I have. That's a good thing for around here, where we are twisting, turning, going up, going down, and hopping logs or other trail obstacles constantly. The Blackbuck is really a great bike for trails here. Well, at least if you set it up properly, it is!

That's a little more "in depth" than wheels and tires, but it all adds up to a package that makes me smile and I can go fast with relative ease. I'll probably dress up this bike with a few choice parts, but you can bet I won't be changing out the fork, wheels, or tires anytime soon!