The Tale Of The Luxy Bar

The Luxy Bar: It is an odd ball bar that has taken on a life of its own of late. I call it, "thing wanted-can't get it", because it seems that once something odd like this passes from availability to obscurity and people start showing up with them on bicycles, then folks want it.

Maybe I am wrong, but this component is the most asked about component from my contacts via Facebook, e-mail, and Twitter, not to mention at gravel events and rides. Apparently, I have found out, it also is something a lot of folks are wanting to try. A little tiny market for used ones has sprung up. I actually got one just yesterday in the mail I purchased from a guy in Connecticut via Facebook. Another Luxy Bar fan I know just grabbed another Luxy Bar from a guy I helped get one to that ended up trying it and not liking it. It's kind of bizarre, but here's my take and a little back story on the Luxy Bar.......

The Luxy Bar started out with something I posted once on MTBR.com about how I would make a good drop bar and no one had it right yet back in 2009.  Well, I got a quick e-mail from Brant Richards, who had just left On One and had started his own design company and was running a brand for Chain Reaction Cycles called "Ragley Bikes". He wanted to know what I would do for a drop bar. I had actually done a sketch, so I scanned it and sent it to him with my thoughts. He said thanks and that he would get back to me. 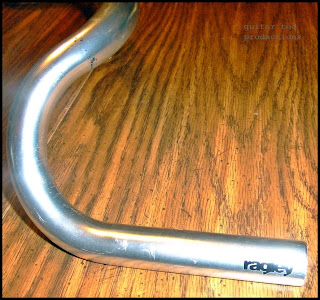 I didn't hear anything for quite awhile, then Brant e-mailed me some factory images of a bar called the "D-62". I thought it was a bit of a radical departure from my original intentions, but I also had not seen anything quite like it either. (See these images in my blog post here from 2009. )

Brant was calling them the "Luxy Bar", after a bar/lounge in Asia. The bars were then to see some time under some testers and refinements were made. (Note, production bars differ from those raw images you see in my '09 post.) One of those testers was Sam from Singular Cycles. Near as I can tell, it was Sam's influence that made the Luxy come out as it did.

It was a long while before I heard the Luxy was ready, but in early 2011, Brant sent out a pair for me to try out and to say thanks for helping. (Although the final product was so radically different than what I initially put forth I have to say that I had no input! At least it wouldn't appear that I had.) So, I immediately mounted them up and started riding. After the first 300 miles or so, I posted an update. (Seen here) The Salsa Cycles Woodchippers were already out and I had purchased a few, but after the Luxy came along, I eventually gravitated toward using them more and soon the Woodchipper was no longer a favorite of mine.

Apparently a few folks fell in love with them, but not too many. I didn't hear much about Luxy Bars from others and I was always surprised to find out that certain people had them. You just never heard about them and they didn't come up in conversations about drop bars back then. Soon after I received the Luxy Bars, they went out of production, and perhaps that was due to Brant Richards going back to On One, or for low sales, or both reasons, I do not know. At any rate, that was that, and I figured I'd never hear about Luxy Bars again.

Well, about six months ago, I noticed that some people were chatting up Luxy Bars and I began to hear about folks looking for used ones. Then the inquiries came, probably based upon my past postings on them. The answer was always the same: "No- You can not get them anymore. No- I do not know if Chain Reaction will ever do another run." I heard from a Facebook friend that he had e-mailed about Luxy Bars going back into production and the answer was that there were no future plans to do anything with them. Then I decided to start a bit of a Twitter campaign to point out that folks could not get them anymore, but were looking for them. (hash tag #thingwantedcannotget) Then I actually contacted Brant one day and asked if he could get something done similar to the Luxy for On One.  Maybe that would work? Brant said he'd look into it, but that's been the last of it.

Still the Luxy Bar seems to be "in demand" by certain aficionados of drop bar usage off road and by gravelists. Just yesterday I ran across three more folks that said they'd like to try them.

Ha had I known you were going to do a whole blog post on em I'd have charged more! ;)

Here's to many miles of smiles with those Silver Luxy Bars!

@MMcG: I had a Facebooker ask me about the entire deal, so I figured I may as well share that story with others as well. Thanks again for hooking me up!

My old school Gunnar Ruffian 29er singlespeed was built with a really tall headtube. After almost selling it on Flea-bay I decided to convert it to drop bar. I used my pair of Luxy Bars and it has brought the bike back to life. The thing about those bars is the 31.8 all across and the width for cranking up steep hills.
They should bring them back. Somebody must have the tooling.
It truly is a great bar.
Ari

So do I hang on to mine or sell them while people are wanting them badly? They are very unique and very cool. Guess I got lucky on Craigslist!

@ Ryan: I say- Use 'em up! That's what they are for. Otherwise, get rid of them. Just my advice, but if you want money instead of bars, there are folks willing to pay a bit- not a lot- to get ahold of these things.

I sold my to a friend, and he is happy with them. I liked them very much, too, but found them a little too wide for city riding on my cross check.

I also wanted to try the Midge, but you can only get it in white or black anymore in 25.4, no longer in silver, which I'd prefer.

Origin8's Garry II was a black-only bar, too... drat my silver aesthetics...

I keep hoping WTB brings back their old version of the dirt-drop...

Yep, I want some but can't them. I regret that I hesitated and went for woodchippers, but now running an H-bar.

Luxy's, I waited and waited and got'em. Tried'em and sold'em. Didn't like the shape. The Gary II'a are a good shape for me.

Yeah, I know this is an old discussion. I was one of the people who emailed and asked. That was in October, and at that time I hadn't seen this post. I have a set on my Salsa Fargo and they are without question my favorite dirt drop style bar. For me, the differentiator is the relatively parallel top and drop. I also like the wide flare.

I procrastinated in buying another set, and by the time I was ready, they were gone! I've even considered seeking out a custom made version but I'm still hopeful that I'll find a pair (or two!).