The Bitter & The Sweet 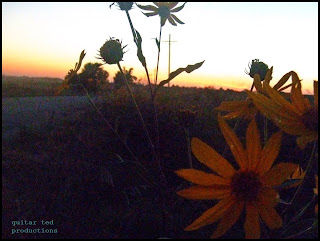 The weekend was an emotional roller coaster for me. It all started with my Grandpa's death and the funeral was Saturday. He was 102 and lived a simple, awesome life, died in his sleep, and of course, it wasn't a surprise to me. I figured it was time soon.

Still, these sorts of things have a way of undoing you in surprising ways, and I was not immune. I'll just leave it at that. Suffice it to say that Saturday was beyond category in terms of my typical emotional state of being.

Sunday was a busy day. Played in the church band on my Fender Jazz V bass. Always a pleasure to bust out that axe and thump, and Sunday was no different. The afternoon was spent with my family and I barbequed us up some burgers and pork and vegetable shish kebabs which were awesome. Doing the grill is a great way to have some fun contributing to the family for me. My wife appreciates having not to worry about the cooking!

The weather was improving too. Friday was absolutely brutal. 97°F with very high humidity. Saturday was not much better, albeit a tad cooler with a breeze. Sunday was cooler yet, but still humid. Then Monday came along with much lower humidity and cool breezes from the Northwest. 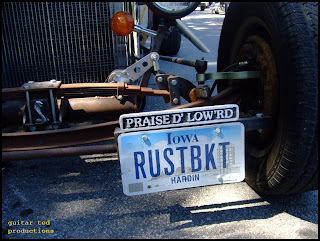 Monday was the traditional trip over to see my folks and hit the annual car show in nearby Iowa Falls. I enjoy seeing the range of automobiles from turn of the century, (early 20th Century!), cars and trucks all the way up to the latest cars like C6 Vettes and Dodge Challengers and Chevrolet Camaros, which look like the older cars but have a modern take on design and amenities. Everything else in between is represented and displayed for all to see on the streets of Iowa Falls, which closes the downtown streets up for the cars to be shown.

There are cars from year's past that we've enjoyed and come every year, but there is always a crop of new entries and this year there were a lot of those represented. My favorites were a '36 Ford convertible that was lowered, modified, and painted a cool brownish orange. Then there was a '39 Ford sedan that had been chopped, shaved, lowered, modernized, turned into a hardtop, and painted jet black. It was so well done that you would have thought it rolled out of a factory that way.

Then I sat with my step-dad and watched my son play with some local kids for a while. It was a relaxing, great time to hang out with my family. 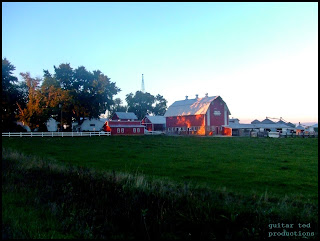 But one thing was missing from my weekend, and that was a bicycle ride. I really was missing that, and I needed to get out there and clear out the cobwebs. Mentally speaking, that is. I just needed that. Hard to explain unless you've been there.

So we ate our evening meal once we got back home, then I kitted up and grabbed the ol' Orange Crush and went out with this new light I am testing. I decided to make it a sunlight to night time ride. It was a beautiful day, mid 70's, light Northwest wind. The Sun was sinking to the horizon, and I was on my way winding on through the streets of Waterloo, Northward out of town. It felt great to be back on a bicycle after all the downs and ups of the past couple days.

I headed North up the 3GR route, but I didn't want to do the entire loop. I decided to cut over on the county line road as the Sun was quickly sinking and firing up the Western sky with its radioactive pyrotechnics. I was racing to get to the turn towards the Sun before it was too late. Along the way, that "golden hour" of light was too tempting. I was snapping pics about every five minutes, it seemed. 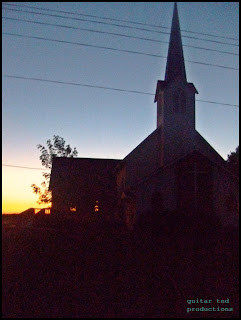 I ended up stopping to turn on the lights at the turn Westward on the county line road. I snapped several images just as the fire in the sky was at its zenith. I made it just in time!

Then I took off. Twilight seems to be the most difficult time to see the gravel roads for me. It is not bright enough to rely on sunlight, and it isn't dark enough yet to get an LED light to do much of anything. I muddled along okay until I turned back Southward which immediately showed improvement in the LED lighting, and I could then rely on the light to discern the road way, and the lay of the gravel on it.

The Black Mountain Cycles rig has a front rack to which I have fashioned a light mount. It ends up being between where a handle bar mounted light would be and where the axle on the front wheel is. This seems to be about the perfect height for a head light, in my opinion. Just low enough that it shadows the ripples, gravel lines, and washboard, not to mention the potholes, which you definitely want to avoid!

Feeling comfortable with this new light, I increased the pace a bit and was sailing along. It was great fun. I always seem to pick things up at night and ride far better than I ever do during the day light. I am not sure why that is, but it "is", and I enjoy it. Hills that sometimes drag on me a bit were found to be reasons to accelerate last night. Good times!

I made it home and was satisfied with not only the light, but with the ride and the ending of a tumultuous weekend on a high note. Not that bicycle rides cure all ills, but I have to admit, it sure didn't hurt either!
Posted by Guitar Ted at 1:30 AM

Very sorry for your loss. No matter if we know "it's time" or that someone had a good long life it's still hard to say goodbye.

The rest of the weekend sounds really nice. I know what you mean about the bike ride! Yesterday on my way from a MTB ride all I could think was what a wonderful day it was for a long bike ride. Glad you got yours in!

Lots of good cars in Madrid Sunday too. Those sunset pics are really rich. Camera-behind the sunglasses- trick?

@Travel Gravel: Not this time. Just a shot while riding and a bit of in computer tweaking.