It's just about that time when the day light becomes too short on supply and you are not ready to pack it in yet with your cycling. What do you do? You bust out the lights! As anyone that does anything at night on a bicycle knows, these days, the lighting technology is crazy good. Too good in some cases.

I had the honor of testing a crazy bright Magicshine light recently. It has waaaay more light coming out of it than a person would ever need. Like as in more than a car's headlights on high beams bright. This sounds really good to many people. More is better, right?

Well, it isn't all that simple with lights. That Magicshine light had punch, it threw light way up the road, but it wasn't without issues. Think about how some lights are annoying. Camera flashes come to mind. The color, the intensity, and the overwhelming amount of light is not fun to have flashed into your eyes. This Magicshine light has similar attributes, in my opinion. The light is so intensely bluish-white it tends to wash out details, it gets tiring to look at, and that doesn't even mention the amount of heat that beast generates.

I like a bit warmer hue to my lights, and most people tend to do better with that as well. Just look at your car's headlights for an example. Warmer hue, diffused light, easy on the eye, yet shows a great amount of detail. Makes sense that a bicycle light should do something similar, no? 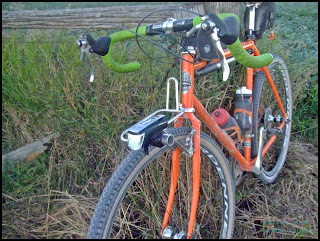 That's one of the reasons I am liking this Trelock light I am reviewing better than the Magicshine one. The light isn't so crazy brilliant that it wants to make you go mad. It also doesn't make your eyes shut down your pupils so much that when you look away you are blinded. I like being able to look around me and see stuff. I bet you do too.

In fact in Germany, where Trelock hails from, the government actually mandates certain parameters of bicycle lights to protect cyclists and car drivers. (The Magicshine light I mentioned would be illegal on the road, for instance.) It makes sense that as a cyclist, you shouldn't be blinding automobile drivers, no matter how dumb and inconsiderate you may believe they are. That's one reason the Trelock is what it is, and despite the limitations of the Germans, I appreciate how that plays out on the gravel roads here in Iowa.

The bottom line is that you have to be able to discern road hazards, pick good lines, and keep rolling at a rate of speed you want to maintain. That bottom line is met for me with less intense, full coverage lighting. Add in the self contained batery and USB charger and this is a better bet on gravel than the Magicshine is. "More" is not always better.

How do you feel about this light for MTB purposes (in concert with a helmet light)?

@Matt: I have used it off road only once, but I think it is probably okay for some situations. I'll be doing more off road/single track with it and I will publish my thoughts on that soon.

I am saving my pennies to buy a Supernova E3 headlamp for my generator. Does anyone have any experience with such a light?
Ari

Been running the Supernova E3 headlamp for a few years on my Vaya... Lots of gravel and trail rides with it. I've got crappy night vision, and the E3 definitely puts out like a Bangkok hooker.

I've been using a Chinese knock off of the Chinese Magic Shine. I don't know if it's made in the same place or what, but I paid $18.00 with shipping. It is really, really bright. I Mainly run the low setting, switching to bright or medium if need be. It worked extremely well for me at Gravel Worlds, where I came in at 0100hrs. I was surprised at the battery life on low. It will hold m over until I can afford something better.