The 3GR from yesterday was looking like it may not happen. I awoke to hear thunder and a quick check of the radar showed a couple waves of fast moving showers were rolling in. The timing of these would determine just what would happen, but I was planning on going out if it wasn't lightning out.

I rolled out about 10 minutes later than normal and the sky didn't look too bad. I rolled through downtown and then, not knowing the exact time, I decided to kick in some higher gears and I sped on down the street to the meeting spot. There I found Mike waiting and he told me I made it with 10 minutes to spare.

Just about time to go, then my phone rang. It was Dave, new to the area and new to riding gravel. He wanted to meet up with us and give this gravel travel a try. Soon he was in the lot and unloading his rig, so we waited and left a few minutes later than usual, but that was okay. I figured we would have a chill pace and not push it too hard to make sure we didn't scare Dave off by being too hardcore. Besides, it looked iffy to the Northeast, but I figured it would pass on by before we got there.

We rolled out with a lot of chatter and things were going smoothly when I felt a few drops on my forehead and arms. Hmmm........we might get a little wet, but I was sure we wouldn't melt!

It never got to the point where it was outright rain- just some sprinkles which faded away. Then the clouds departed for the most part and we enjoyed a pleasant day from that point on. It was definitely humid, and it still felt like Summer out, but it wasn't steamy hot, just decent.

The roads have deteriorated to the point where the gravel has decayed to smaller size or dust in many spots. The tires of vehicles have crushed it down further and swept many nice, clean tracks now. However; there is also a lot more wash boarding, which caught us out a couple of times and rattled us and our bikes pretty severely. Although the showers left us quickly and allowed for a ride, we really need the rain. An all day, slow and steady rain, because the area is getting pretty dried up again, like last year.

This was Dave's initiation to gravel riding. It also was one of the first times he had gotten out in the country to see Iowa up close and personal. He's from Duluth, Minnesota, so I figured that it may be a bit hard to impress him, since, you know- they have Lake Superior and a great wooded back yard with tons of beauty that is stunning. I've been up that way a few times, so I realized that going into this ride. Maybe Dave wouldn't think much of it.

It turned out that Dave not only liked the gravel road riding, but saw Iowa as an interesting place to check out as well. I was pleasantly surprised. He also was trucking right along, and despite his bike giving him some fits with regard to shifting issues, he was maintaining a great attitude and it was a good time riding with him. In fact, I felt as though we were back to pushing the pace, as usual, on this ride of late.

Then we came upon a herd of cattle being ushered across the road ahead of us. Holstein Friesian dairy cows are nervous Nellys  and they don't like sudden movements or strange folk. I knew all this from having been around them and being taught about them by my Grandfather who had milked several herds of these cattle in his lifetime. I asked Dave and Mike to stop about 70 yards away and wait so we wouldn't spook them.

The cattle soon passed on and we took off again down the now ever dustier roads. Whatever moisture dropped earlier that morning did not make much of a dent into the dry, cracked earth. 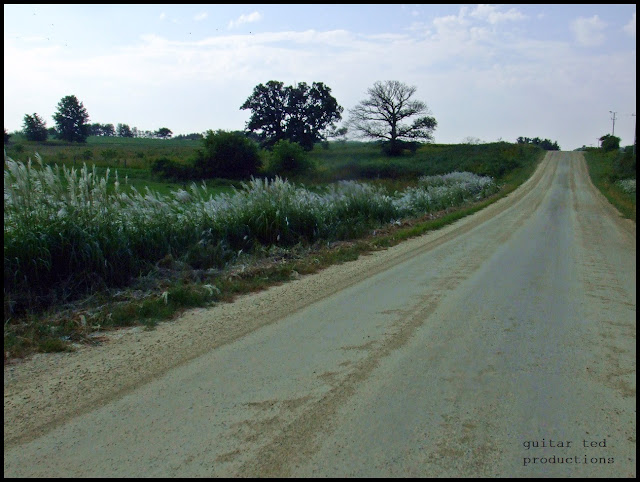 It was an excellent ride and Dave joined me for some coffee and a treat at the Cottonwood Canyon coffee shop in downtown Waterloo afterward. We had a great conversation, and then I headed back home, hungry and tired. It was fun to see another person discover the attraction to riding gravel and even better to hear that they liked the land as well. All in all a really good 3GR. And a fast one! Despite the stopping for the cows, we still did the loop before 11:00am!
Posted by Guitar Ted at 1:30 AM