Open Source Naming Project: An Open Letter To The Industry 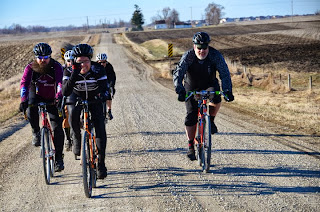 To Whom It May Concern:

I am a rider that likes to ride across hill and dale. I used to do this activity on paved county roads on what the bicycle industry commonly refers to as a "road bike". However; the traffic concerns, attitudes of some road cyclists, and the average uncomfortable nature of road bikes these days led me to riding even deeper into the hinterlands. A place where cars and attitudes are sparse. A place where a different kind of bicycle rules the day.

Many call these bikes "gravel grinders", and that's fine by me. However; it is perhaps a bit of a limiting name. Many places do not have gravel roads, and many riders may not want to do a gravel road ride for several reasons. That said, it is my firm belief that a fatter tired, slacker angled, more stable road bike is exactly the sort of bike the industry ought to be concentrating on. It would be more comfortable, easier to ride, more versatile, and therefore has more potential appeal than road racing style bicycles and the culture they represent, which I would suggest is not the culture the majority of potential cyclists can aspire to, or relate to. The gravel bikes appeal on a more basic level. They can be associated with relaxed rides, versatility, recreation, and yes, even racing.

These bicycles need not be heavy. They can be nearly as light as racing bikes. They definitely are not touring bikes. But what is missing is a good name for them. Several have been suggested on this blog over the past few days. There are 76 comments between these two posts with name suggestions: (Here and Here)  Take from it what you want.

I have no horse in this race, and neither do the core group of gravelists that commented here. My aim is to broaden the appeal of such bikes for the masses. It is my firm belief that this sort of bike is the best bike for the majority of the populace for all sorts of roads no matter how they are surfaced or not.

Sincerely,
Guitar Ted
Posted by Guitar Ted at 1:30 AM

GT, you present a well thought out and well written argument for the kind of bikes many of us prefer. But you still managed to sneak in the G word. I believe that is because of the Midwestern terrain that you ride in. For those of us in other places, these roads are normally not covered in gravel but are just what ever was there when it was created. We call them dirt roads. That along with double track, single track, even animal trails make up the terrain we ride.
My point is that to identify a universal name for such a bike, the G word is not inclusive of all regions or uses and should be excluded.

I understand that you think such bikes are great and possibly the best for many (I agree, better than the mtb, anyway), but why does the industry name for them matter?

Wait, is this just for fun? I sometimes forget how to have fun.

Whilst googling the revolt I read this link http://www.cxmagazine.com/giant-introduces-road-revolt-gravelbeginner-bikes-interbike-2013

Interesting what they believe they have designed the bikes for. I would think that the revolt could be potentially quicker on a cross course so not sure why the emphasis on beginner is. Excuse my ignorance but what is the "back angle" they refer too? 54 and 58 deg. Doesn't go close to working in with the geo figures for seat angle etc.

@Roasta: I looked at that, thanks for the link. I have not come across this "back angle" term before. My thought is that they are referring to how far one bends over while seated on the bike, thus they are referring to the "angle of one's back", perhaps? I infer this from the "upright" comment and "more aggressive" comments regarding the Any Road and Revolt respectively.

As for "beginners" cross bike, perhaps again- this may have something to do with the perceived relaxed angles and lower bottom brackets on these bikes? I suppose since they are not being marketed/designed as all-out cross bikes, this is where the comments come from concerning "beginners" CX rigs.

@RANTWICK: Names mean something to folks that are uneducated about bicycles. Names are used for marketing purposes. These are facts of our world, such as it is. In terms of what a discerning cyclist thinks, no- the name thing doesn't matter, but most folks are not at the level of geekery that many readers of this blog are at.

So, I am a mechanic at a retail bike shop. My observations tend to lead me to beleive that "names" are used as decision makers by customers. Call a bike a "mountain bike", and they immediately tune out if they do not think they will ride on a mountain. If something newer, like a fat bike, is called a snow bike, this decision becomes even more common and pronounced by customers. They don't ride in snow, so they discount the possibilities out of hand.

Gravel bike? Gravel grinder? It doesn't mean anything to many, non-bike geeks. (And even many bike geeks don't get it.) Call it an "Any Road" bike, and the perception might be different. See?

Perception is a big deal in marketing, and therefore, so is the name. If you want to sell these types of bikes to gravel freaks only, well then carry on with the gravel grinder tag. If you believe, as I do, these are a better road bike than a racing bike, then the name needs changing.

To a certain extent, I agree with you, Guitar Ted, but on the other hand, mountain bikes have been a resounding sales success in Nebraska and Iowa, despite being called mountain bikes. I don't think that, if a bike is appropriate for the terrain being ridden, somebody will, or should be turned off by it simply because the 'category' the bike falls into says 'gravel' in the name.

That's why labels are so limiting... Just call it the best bike for the conditions and get on with it! ;-)

@MG: I would ask you to consider if fat bikes would be as successful had everyone referred to them as snow bikes.

I would suggest that if we're being honest the answer would be no. At least, that's what my experience on a sales floor has shown me.

To a certain extent, I might see this, but I don't think it is an apples-to-apples comparison. Fatbikes are a hard concept for a lot of folks to get their heads around, regardless of what you call them. Gravel bikes are much less of a stretch for the average cyclist to understand and embrace for their type of riding.

That's my $.02... That said, when I worked on the sales floor, fatbikes had yet to be invented... But we were already riding gravel (ironically on mountain bikes).