An Ode To Adventure:
When I was a kid, it happened with regularity. So much so that I didn't even think twice about how special those times were. What were they? Adventure rides- Rides where I didn't really know where I was going nor just what it was I would see. Rides that had no time limit......well, that's not entirely true! I didn't miss supper! But bedtime, darkness, or parental warnings never were really hard and fast rules. It was whenever and wherever the bicycle took me.

Fortunately for me I was able to go on about three or four "official" Fargo Adventure Rides which were all organized by Jason Boucher, who used to work for Salsa Cycles. All were a blast, but Jason kept refining his idea until in 2010, I feel he hit upon the perfect "recipe" for the outing. Riders were to come into town, hang out the evening before, (if they wanted to), and the following day, all we knew was where we were leaving from and that we needed to be going all day long. Just like when I was a kid!

We left and spent the entire day going where- we did not know with the exception of Jason- to find adventure on pavement, gravel, dirt, and grass.

It wasn't racing, it wasn't a "group ride", and it wasn't all "organized" or planned out 100%. (At least it didn't feel that way.) No one got hurt, we were spent at the end of it all, and everyone had such a good time that when Jason mentioned it recently, many of us were clamoring for another go.

I think it is an excellent idea, but what is more, anyone can and should just go have a bicycle adventure. Just like when we were kids. These are the best, most memorable rides, in my opinion. If I think about my top ten rides of my life, most of them are rides like this. Not races, not group rides, and not at events I have attended, for the most part. The ones that would rate from events were ones that had a high degree of adventure in them, for sure. Bottom line is- plan to "not plan" and go have yourself a little bicycle adventure. The sooner the better. If you need a little more stoke, see Jason's post on our 2010 adventure here. 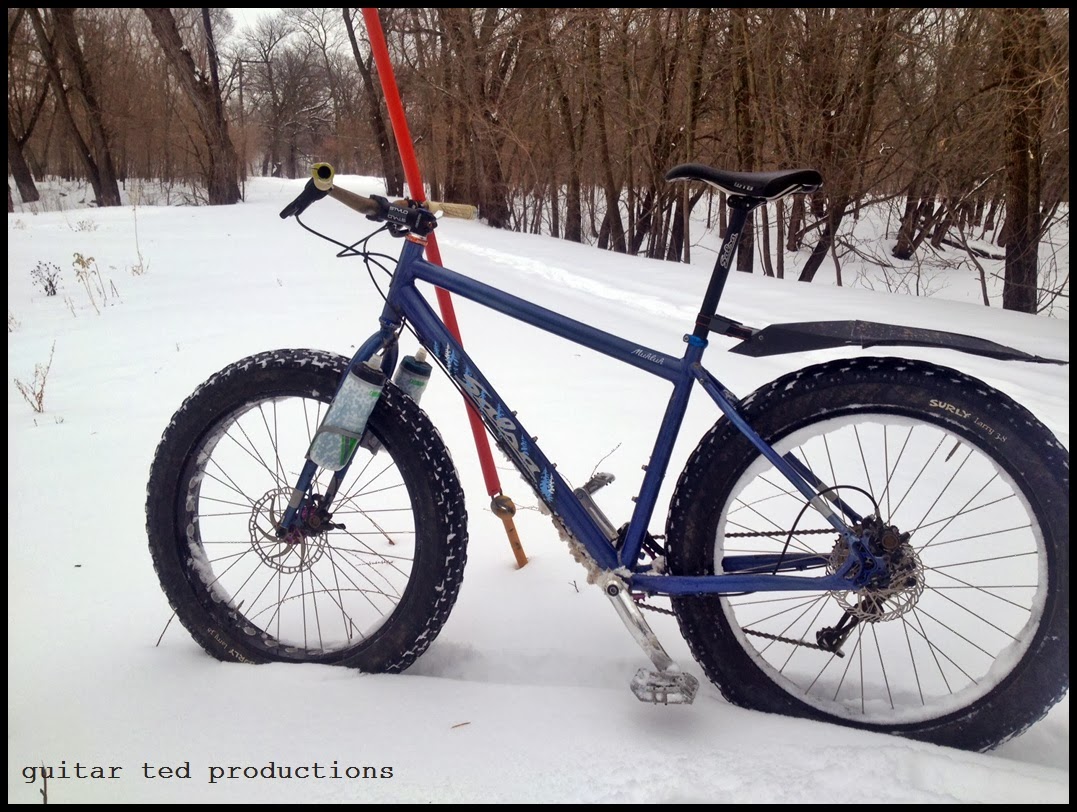 I've been hit twice in the span of a month and a half with some of the wickedest sickness I have experienced in a long time. Most recently last weekend into the first part of this week. Something viral, which made for a heavy feeling, soreness, lightheadedness, a severe, debilitating headache, and sinus trouble.

It put me off the bicycle along with the weather, and I was feeling the extreme need to ride Wednesday. I had ridden the Snow Dog to work, and I got off early, so I took the long route along the Cedar River back home. I knew that a street had been blocked off to only allow cycling and pedestrian traffic down that way, so I went down to check that out. Normally it is a chip seal street, but what I found was a bit disappointing.

The street had not been maintained, or touched at all. There were some signs of some walkers and one fat bike track dusted over with recent snow. The snow had been rutted in by trucks or official vehicles in some places, and when I came across this, I could ride. Otherwise, it was off the bike, post holing, and pushing.

I reached the end of the old street section near to where the dike creeps in toward the river. Here at this point there used to be a lot of cars entering the bike path and using the dike's top to access an old raceway grounds hard by the river behind the dike and out of view to anyone so they could do........well, whatever! Nothing good, I'm sure! It used to tick me off because I was using this path several years ago as my commute to work and I had a close encounter or two on the bike path where no motor vehicles were supposed to be. So I took matters into my own hands back then.

At the point where the chip seal ended, I stacked up big piles of chunky limestone, kind of like totems, to prevent cars and trucks from accessing the bike path. A couple of times I would come back to find the stones scattered, but I would always come back and build them up again, more and higher, until finally the City came in and erected three bollards to effectively cut off the path from encroachment by cars and trucks. Anyway........

I accessed the top of the dike where I hoped to find that the wind had blown off the snow thin enough that perhaps I could ride. When I crested the top, I found I was in luck! On the leeward side there was a thin, brownish strip where the grasses had been able to keep their heads above the snow with the help of the winds. Here the snow was thin enough to ride over. It was punctuated by many Canadian geese tracks. Apparently the thinner snow attracted them for foraging for some hard to find Winter snacks. I stayed to this exposed grass. On the bike path, the snow was so sugary in consistency that riding through it was out of the question.

I was cautious not to ride too far to the downward slope side, since getting off camber was resulting in a quick loss of grip, again due to the slippery, granular sized snow that acted more like loose sand than snow proper. I did slide out once, but otherwise I made a good stretch of pedaling out of it despite having to suffer a Northeasterly wind which was humid and cutting.

The ride was cut short once I was behind the fence that came close to the dike on the one side and the low cement foundation on the other which caused the snow to collect rather than to have been blown off. I gave it a go, but to no avail. With lack of consistency and stability with that snow, I was swapping ends and it was simply no use. I was wasting energy, so off I go pushing until I passed by this section and could ride a bit further up the dike. Eventually the dike gave way to allow Conger Avenue to pass through it, and here I dumped off the dike to the street. 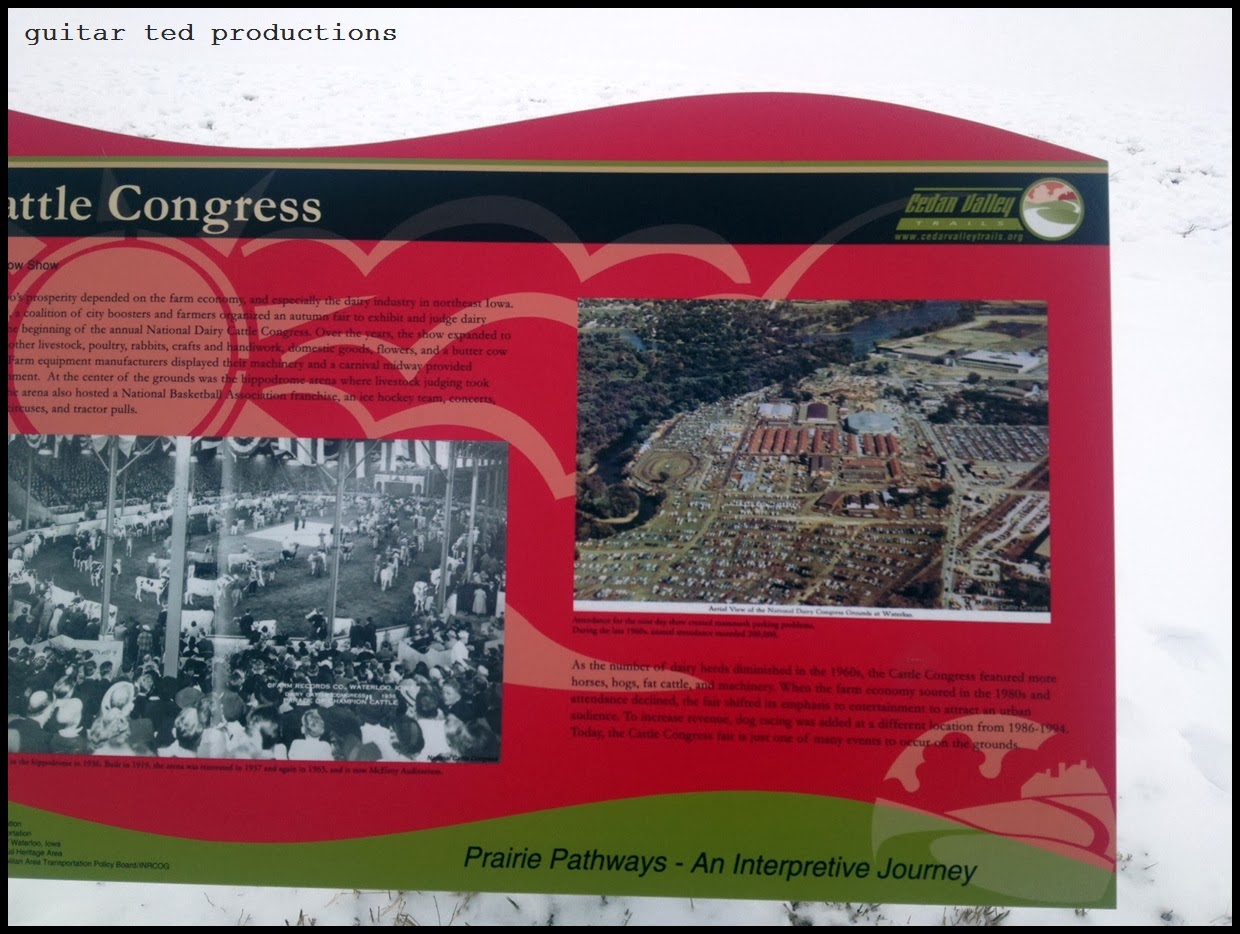 This dike essentially protects the National Cattle Congress grounds from potential flooding. The Cattle Congress, as we locals call it, was an annual "county fair", for lack of a better term, and attracted agricultural interests in the early days, then it became a sort of "fair" when I was younger. Industry, businesses, and the ag side all came together to show their wares and entertainment also was a big thing then. I saw several touring Country & Western acts then, since my floks were into that sort of thing.

The Cattle Congress still happens but it has basically turned into a yearly carnival with amusement rides and is a hollow shell of its former self, lacking any of the "glory", pomp and circumstance it once had. I'm not sure that such things that could claimed to have captured the public's attention and were the "big deal" for entertainment 50 years ago can be viable in these self gratified days of the Information Age.

I pedaled now past the John Deere foundry on some dirty, mashed potato snow and dry pavement. The stench of the foundry is unmistakeable, once you've experienced it. Here is where a lot of John Deere parts are born.

The road that passes by the foundry is called Westfield Street. This passes by all the old John Deere grounds where once all the tractors were assembled. Most of the old buildings have been demolished now and the old parking lots are still there, the only piece of the old days that gives one any indication that at one time, hundreds of employees would park to swap shifts with hundreds of other employees. Now it's mostly empty fields and low, drab buildings.

This brought me to the cheerless streets of the Western edge of downtown Waterloo where I made my way back up the hill and into my neighborhood to get back onto some snow. The sidewalks and streets were still covered and decently packed in. At least the last several blocks of my long way home were interesting and challenging. Probably the last decent snow ride I would get for 2014.

Have a great weekend folks!
Posted by Guitar Ted at 1:30 AM

I tend to be a direct, let's get where we're going, type of person, so I'm very lucky to have accumulated friends who've re-introduced me to the joys of exploring by bike. We've spent so much time trying out side trails and exploring new places that it's finally becoming my nature to do so as well.

That takes me back to where I also formed my cycling habit. The backroads and urban assaults of Waterloo growing up started my addicition.I forget about the days of ending up who knows where in the many different neighborhods of Waterloo. Thanks for re-opening my old bicycle adventures from a fabulous town, they were almost buried.