I finally got the Raleigh Tamland back to the house yesterday. A day later than I had intended, but that's okay.  Now the test riding begins! First will be today's commuting, then Saturday I have a test session for the rig at a "secret location". Look for a full report Sunday on where that is....

So, since I haven't ridden it just yet, (besides pottsing around in front of the house last night), I can only comment on a few aesthetic things and a minor comment on spec.

I have grown to like the paint job more than I did originally. Funny that I didn't catch on until my daughter saw it and dubbed it "American Flag". Well.......duh! It is red, white, and blue after all! Then there are the steel tubes. I like the thinner steel tubing look. A fine departure from the massive, swoopy carbon frames. Simpler. Easy on the eyes. That goes for the graphics as well. Raleigh really restrained themselves there.

I don't care for the black Ultegra 11 speed look. Black. Gah! Black is the color of plastic, or carbon fiber, but obviously, this isn't the latter. It's going to look horrendous once it gets gravel dust all over it too. Silver would have been so much better in this regard, like the stuff on my Black Mountain Cycles rig. Anyway, I'll be riding this a bunch soon, so stay tuned for details..... 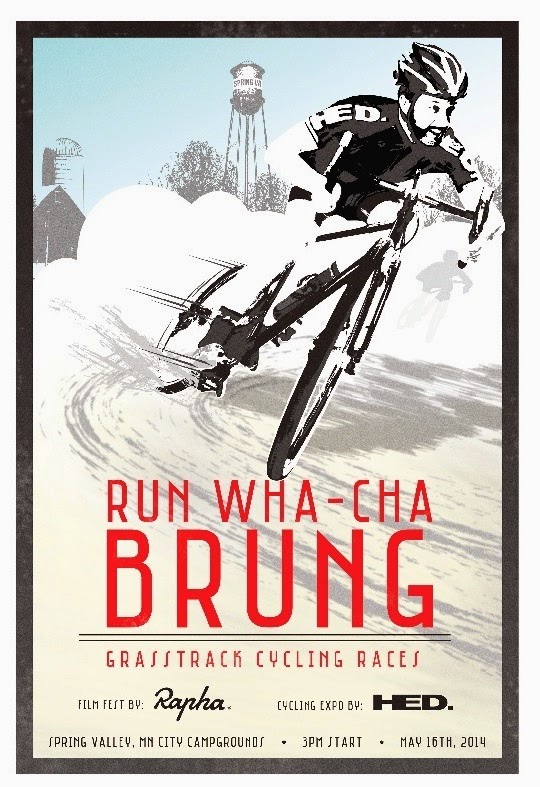 You've heard of the Almanzo 100, but did you know that this year there will be some "grass track racing" and a vendor expo? Yep, and it'll all go down the night before the Almanzo kicks of on Friday May 16th at the Spring Valley Minnesota Campground.  Here's a brief listing of what is going down there...
So, could this evolve to become the "gravelers version" of Sea Otter? That might be pretentious, but it would be pretty dang cool for the Mid-West and all road riding.  Hopefully the weather cooperates and this inaugural event comes off well and is well attended. I'd love to be there myself, but I already am engaged to do something with my son that weekend and won't be able to make it. Actually, if I could make it, I'd be riding in the Almanzo 100, and would be sleeping early that night somewhere else to get a good rest!

Steve Domahidy is a smart, really nice guy. Whenever I went to Interbike and Niner Bikes was there, I would get Steve off to the side and get him talking about the bikes he designed. It was very interesting, fun, and it was really easy to hear Steve's passion and caring for his work in his speech and see it in his body language. If there is one thing I love about the cycling industry it is passionate, caring cycling nerds. (I mean that in the best possible way!)

Well, Steve broke off from Niner Bikes and now he is trying to kickstart his own company. The main bunch of rigs are 29"ers, of course, but Steve, being the practical, smart fellow he is, realizes that small individuals need something other than 29 inch wheels, so he is adding some 27.5 sizes in the titanium and Reynolds Steel hard tails he is offering for such folks.

The Kickstarter campaign ends real soon, so visit the page and make up your mind soon if you want to see this thing off to reality. Either way, I'm sure Steve will land on his feet somewhere and be just as passionate and caring about bicycles as he ever was.

That's a wrap for today. Get out and kick off some Springtime miles!
Posted by Guitar Ted at 1:30 AM