Yesterday I had the unique experience of learning how to do something bicycle mechanics like Wilbur and Orville Wright were doing in their sleep in the late 1800's- that being how to mount a solid tyre to a steel rim that uses a wired on method to affix the rubber to the rim.

I did a search on the internet and came up with about five resources which all pretty much agreed upon the "how" to do the job, but varied greatly in the "what to use" department to get there.

Oh........yes, you may be wondering why in the world I am undertaking the search for this archaic knowledge. Fair enough- The odd job came in which requires the mounting of a solid core tire, (I have been spelling it "tyre", for the reason to indicate this method's antiquity), which is held on to the rim with a wired on core. Let me explain more clearly: This "tyre" is really nothing more than a hard rubber tube which has ends. One then threads a heavy gauge wire through the center of this rubber tube and then by using a special formula, the rubber is cut so that it overlaps a certain, precise distance. Then the wire, which should extend further out of the ends of the rubber, is tensioned by a special jig or machine, (depending upon the tool used), which drws the wire tight around a rim with the rubber seating into the rims "U" shaped well. Then by a special process, the wire is cut and brazed together resulting in a continuous loop of wire, which the rubber surrounds. 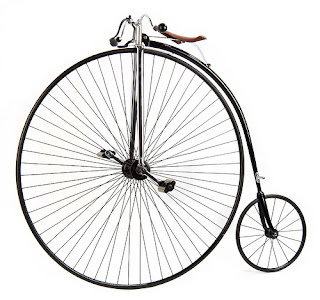 Well, typically this would have been for the "ordinary" type of bicycle, (or "penny farthing"), but not this time. No, this is a really odd set of wheels for an ancient wheel chair.

So not one, but two! I get to try to do this feat of ancient, dark bicycle knowledge, and I don't have much margin for error since, ya know......I can't just walk into the back room and pull out some more solid rubber tire material. There is only so much of this stuff at my disposal, and quite frankly, I wonder if there is even enough to do both wheels! I actually found a place on-line that sells the solid rubber and wire for this sort of deal and it isn't cheap. I wasn't surprised, since this sort of thing is rare. That you can still get any of it at all in 2015 is amazing to my mind.

Well, at least there is one good thing about this job, and that is that we aren't going into RAGBRAI, when we would be crazy busy. I have plenty of time to sit down and take my time to get this right the first time. Oh, and did I mention that I get to use fire in the process? It's pretty much a guarantee that if your local bike shop mechanic gets to use either (a) a hammer, or (b) fire, in repair of a bicycle, it is considered to be a red letter type of a day. I don't think I'll have to use a hammer, but one YouTube video I found regarding the mounting of a solid rubber, wired on tire, showed a guy beating on the tire with a hammer. So, there is still hope!

So, it's really just another old tired tubeless set up, eh? :)

I remember when gumby came to help me with a frozen BB. We used an impact hammer and a torch and it really scared the owner and customers when they saw that!

@Ari- There are some things owners of bicycles should never see when their bicycle is in for repair. Especially if they have little mechanical knowledge.

Good to ;have a boss/owner with aa sense of history and tradition. Let's hear it for Russ Clark.