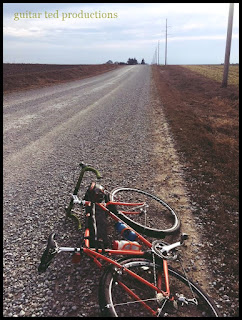 Today I want to spend my time on the blog sharing my thoughts on the coming year. It's going to be tumultuous in many ways. We have a big Presidential election in the Fall where we will have a new President elected for the first time since 2008. To me.......that's amazing. While I don't like how we conduct business around these things anymore than most of you, I still find it amazing that we can change administrations without some civil war, coup, or major upheavals. Anyway, what the heck does that have to do with bicycles!

Well, in my opinion, 2016 will mark a turn in how we perceive categories and purposes for our riding. The road racing bike will continue to wane in light of more capable, adventurous bikes. A change in administration, if you will.  Call 'em whatever ya want to, but gravel travel will be high on their list of capabilities. Wider tires, disc brakes, no mention of the Tour, or time trials, or even "the classics".

Mountain bikes will continue the trend of fatter tires on wider rims which has been dubbed "plus" bike. My inclination is to believe that B+ will be the favored size, but I understand that a 26+ sized wheel/tire combination is coming on which will yield a diameter closer to a current 650B wheel. You know, Surly already is there with their Instigator V2 bike. Check that out for reference.

I feel that 29"ers, fat bikes, and 29+ have seen about as much play as they are going to get and I wouldn't at all be surprised to see some eroding of their popularity and thus, sales, in 2016. Hey! The bike market shows no signs of growth, so somethin' has got to give. Maybe we will see a slight resurgence in sales, but traditionally election years suck when it comes to recreational purchases. But, who knows.......

As for myself, there are a few things I do know. I know that I will be at the Renegade Gents Race come April. I also know that I am doing Trans Iowa v12 as the event director again.

Then there are the "maybes". I have been talked into the Dirty Kanza 200 again. Mostly by myself, but Tony- you pushed me over the edge! (He's a great guy, really. I'm just having fun here.)

Then......I am thinking I am going to give Odin's Revenge another shot. Maybe Gravel Worlds again. So, those four plus my Guitar Ted Death Ride Invitational and a couple of Geezer Rides. Whoa! Sounds just like last year! But things can and will change, so I don't know anything for sure beyond the first two I mentioned. DK200 may not happen for several reasons, and that goes for the rest too. Stay tuned..... These are just what I have on my radar.

Where bicycles are concerned, I have plenty. I don't foresee myself adding anything to the fleet, but that's exactly what I would have said last year at this time, and so there ya go. Famous last words and all. I ended up with the Twin Six bike. I would like to think I would retire/sell off a couple of things, but it always seems hard to actually do that when I look at them in the "stable". Thing is though that there are bikes I haven't ridden in a looooong time, and I have to start coming to the reality that I probably won't ride them again. I did pare down the fleet in '15, so I hope to continue that trend this coming year.

Hope to see you at Odin's Revenge

I was up visiting my sis in Muscatine a few weeks ago; and slid around and wallowed in the mud at Jingle Cross (where I broke off a derailleur) and I noticed you all have a lot different, and more political adds on TV than we do. I bet it just gets crazy around caucus time.