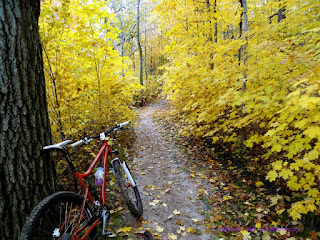 Ten years ago on the blog this week I was talking about Fall riding. That Fall was spectacular. The colors were intense and saturated. One particularly great place that year was Cedar Bend Park.

I had first heard about Cedar Bend from an old friend of mine at the time who used to ride a lot out there. It sounded intriguing, so around about 2007-8 or so I finally made the trip up North of Waverly, Iowa and found Cedar Bend Park.

The trails were mowed like a cross country skiing trail- wide, no weeds, and no discernible "tread" to ride in much of the time. But otherwise they were a blast to ride on due to their fast, rough nature. There was also some elevation change, and some cool short wooden bridges leaping across ravines here and there. There were really steep climbs longer than most anything in Ingawanis, and there was a lot of potential there for building on to what they had.

In general, I hardly ever saw anyone on these trails, but later on equestrians started coming in, and the horse excrement issues were really bad. The equestrians also were running their steeds on the wooden bridges, damaging them, as they weren't spec'ed to handle a horse. Finally it just got to be no fun to go there and I stopped my riding in that park about six years ago now.

Anyway, I have my great memories and images like the one shared here today from my Cedar Bend rides. Maybe I should go back and check it out again some day.
Posted by Guitar Ted at 1:30 AM