Since Tuesday's announcement that the entire RAGBRAI staff had resigned and decided to start up a different ride called "Iowa's Ride", everyone concerned with the issue had been wondering what RAGBRAI would do. Well, on Wednesday a statement was released by RAGBRAI via its newsletter to email subscribers from a marketing person stating that RAGBRAI would, in fact, occur in July 2020.

Obviously the Des Moines Register is scrambling to get an organization set up to take care of the production of the event. No details were given that anyone had been hired or appointed as of yesterday.

Also, yesterday the Iowa Bicycle Coalition announced its support of "Iowa's Ride". Here is an excerpt from their announcement: "We believe that Iowa’s Ride will be the most successful way to continue the iconic annual bicycle ride across Iowa, not only in 2020 but for many years to come. The team that has formed Iowa’s ride and that will be organizing and managing it have unmatched experience and success in doing so. They are the best hope for continuing this proud tradition. We also believe that a cross-state ride will be best operated and most likely to succeed as a stand-alone and independent entity. This is what Iowa’s Ride offers."

On one hand you have a seasoned team in Iowa's Ride that knows how to do this deal. However; this ride has no equity with traditional RAGBRAI riders, many who won't give a rip about the Carson King Affair. They just want to do RAGBRAI, since.....well RAGBRAI. It's a religion with some folks. That said.....

RAGBRAI has a pickle to deal with, and they won't have anyone with the sort of experience that T.J. Juskiewicz and his team have. What sort of production can we expect from a rookie team? Then too, will mainstay vendors stick with the ride? There are a lot of issues with RAGBRAI, and like anything that's been around a long time, a lot of grumbling factions, some of which may want to jump ship to see their visions possibly become reality.

In fact, that's probably the underlying reason why the folks behind Iowa's Ride left RAGBRAI in the first place. 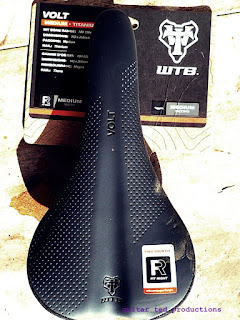 Many of you may be aware that saddle size for your bicycle is like shoes, or gloves, or helmets. One size does not fit all. Or even most, for that matter. So, in the last ten years or so, a few ideas have been put forth to help people sort out which size saddle they could be more comfortable on. (Note- I said "could be")

Sometimes this might be effected by having a sample run of saddles that you actually tried out on your own bicycle. Several companies went that direction, including WTB, back a decade ago or so. Then Bontrager had a system which included a gel filled cushion on a small bench. You sat yourself within the center of this, and theoretically, your sit bones would push away the gel and a color coded scale would lead you to your correct saddle width choice. It was a start, for sure, and I realized when using this system that I had been using a saddle too narrow for me.

Once I had narrowed that down I still had to search for a saddle shape and padding that worked for me. Eventually I ended up on mostly WTB stuff with a smattering of Brooks saddles thrown in for good measure. Last year WTB announced new, wider widths for some of their saddle line and I got to try out the Silverado in a 143mm width. Oh! New favorite saddle!

Then at Gravel Worlds the fit system was being talked about at the WTB booth. I was......pretty skeptical. I watched as my friend Tony went through the four steps and had a width suggested to him along with a couple saddles that matched his profile. Then I went back home and pretty much forgot about it.

In that time I started experiencing some discomfort with my old standby, the WTB Pure. As we age, things change. Maybe I needed to start thinking about a new saddle. The Silverado? Maybe. Then WTB's marketing guy sent me an e-mail asking if I wouldn't go through the saddle finder system and try a saddle or would I? So, I agreed, and this new Volt is what I was sent. Stay tuned for the results.....

TIME is a well known pedal and shoe purveyor that has been most used in the road cycling circles, but they do have an excellent MTB pedal that is shamefully under-represented in the mountain biking and gravel road segments.

Recently TIME announced a new pedal aimed at, what else, gravel riding. Well, to be fair, they are saying this was also influenced by the needs of cyclo-tourists as well. The deal here is that road pedals have a great, supportive platform, but generally use a cleat that necessitates a shoe design which is awkward to walk in. TIME solved this issue with their new Ciclo pedal.

I used road pedals and shoes once, for a short time, in the early 1990's. The ones I tried were those Shimano two bolt cleat ones, remember those? They were smallish and harder than heck to get into, at least I thought so. And those shoes! Gah! Not for me. And then I went MTB shoes/pedals and never looked back. So, I really have no reference point for this "support" you get with more of a platform pedal.

This will be newer territory for me, and I am going in with an open mind to see what, if any, real differences there are. I am quite familiar with carbon soled shoes and stiffer soled MTB style shoes, while my preference usually was for a bit more flex than not. In fact, one of my all-time favorite shoes of recent years was a pair of middling Shimano three strap MTB shoes.

I'll probably bolt these cleats to my old 45NRTH bootie shoes, since, ya know, Fall has progressed to the point that traditional shoes are not going to be a good choice. Stay tuned for how this all works out.

Note: TIME and WTB sent the items mentioned in today's post to RIDING GRAVEL for review at no charge. There was no money exchanged or promises made to include these items in today's post.

That's it for this week. get out and ride, but be careful of all the farmers this weekend if you ride out in the country in the Mid-West.
Posted by Guitar Ted at 1:30 AM

I've been riding Brook's C19 carved saddle for a while now. I like them so much I have them on the 3 bikes I ride the most. When I first looked at it on the bike I thought "holy crap" that's a wide saddle! Is my ass really that big? But on closer examination you notice they have a lot of convex curvature across the back. Even though it measures 180mm wide only about 140-150mm is usable. Basically it's the distance between the outer rivets. I guess this is a long winded way of saying that if you're interested in trying one of the "C" saddles you might want to go up one model size from your usual.

I am a believer in the WTB system, it's simple and seems to be accurate or as accurate (if not more so in my case) as any of the methods I've used previously. It's also very simple which is a huge bonus, you don't need fancy gel seats or someone touching you in place momma said not to let people touch you. I was plagued with saddle sores the last few years and never contributed it to saddle, after all the saddle I was using was supposed to be very ergon-omic and one of the "best" for comfort. Used the WTB system and have since converted all my bikes over to one WTB saddle or another. It just works.