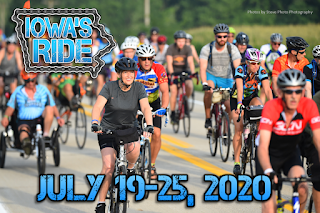 In a bombshell announcement, former RAGBRAI director, T.J. Juskiewicz and the entire RAGBRAI team under him resigned on Tuesday. This apparently over issues regarding the kerfuffle that the Des Moines Register/Gannett/USA Today found itself in over the handling of the Carson King social media affair.

That affair has to do with Carson King's initiative to support the Iowa Children's Hospital charities, an initiative precipitated when King, a college student here in Iowa, asked for beer money by holding up a sign on national TV. Subsequently, the prank went viral and King was flooded with dollars which he then promised to the Iowa Children's Hospital. Several large corporations and entities joined in the viral media blitz which quickly raised hundreds of thousands of dollars. Then, in research for a Des Moines Register article profile on King, King's social media history was mined by a Des Moines Register reporter and the reporter found racist comments King made years ago on Twitter as a teenager. These comments, when brought to light, had the effect of causing Anheuser-Busch to pull support from King's initiative. King publicly apologized ahead of the DM Register story, and public opinion, which was in support of King, was such that the whole situation blew up into what amounted to a public image fiasco for the Register. This went so far that the DM Register reporter had his social media history searched, and when racist statements were uncovered that he had made, he resigned.

Why does this matter to RAGBRAI? Well, the ride is owned by the Des Moines Register/Gannett/USA Today, and their public image handlers were, according to Juskiewicz, trying to hush the narrative since it was a negative for the business. Apparently, Juskiewicz had endured enough.

In response, Juskiewicz and his team had a ride announcement, website, and statements at the ready for this day. The new venture, dubbed "Iowa's Ride" is set to occur on the week that traditionally was RAGBRAI week, and half the proceeds from the ride are tabbed to go to the University of Iowa Stead Family Children’s Hospital. The route announcement is set for November, and further details will be released later.

Comments/Reactions: RAGBRAI, an Iowa tradition since 1973, was the largest organized bicycle ride, maybe world-wide, but certainly in the U.S. Now that string is threatened by this development. It's almost too bizarre to be true, but apparently it is- RAGBRAI just might be done. (Or not- see below.) Note that the "Iowa's Ride" website is fully developed and was obviously worked on and developed ahead of Tuesday's bombshell announcement. So, it is safe to say this move has been in the works for awhile now.

Just the other day I was remarking to N.Y. Roll, (ironically via Facebook Messenger), that "social media ruins everything". One perhaps could now say this about RAGBRAI. Had social media not existed, this whole Carson King mess would never had happened, and RAGBRAI would be chugging into its 48th edition unabated. But, in a twist of fates that could only have happened due to social media, we just may be seeing the demise of one of the greatest cycling spectacles in history.

Or......will we see litigation against the former director and his team tie up the new event so that it won't happen? Money is involved here, so don't be at all surprised to see this happen. If it does, it will likely have a negative effect on the DM Register/Gannett/USA Today which may surprise them, and cause both rides to not happen at all in 2020. From a Des Moines Register article Tuesday:

"Asked whether Gannett plans to take legal action against organizers of the proposed Iowa’s Ride, Yost said the company is exploring all legal options."

It's a big deal economically to bicycle shops in the Mid-West, and communities that host the ride are also standing to be affected negatively if the situation devolves into a litigation battle. Public opinion is not currently on the side of the Register either, so they need to be careful not to deal themselves a further blow by making the situation worse. With several people voicing support for the new ride, it would seem that the tide has already been turned against RAGBRAI.

So could there be two concurrent cross-state rides rivaling each other for the rider's time and monies? Doubtful. The RAGBRAI relies heavily on support from the State Patrol to operate, and without that support, neither the RAGBRAI or Iowa's Ride could happen. It's doubtful the State Patrol would support two concurrent rides of this magnitude, assuming "Iowa's Ride" could draw a big enough crowd. But who knows? It also will be a decision many vendors will now face. To support the old event, or the new? Again, with all the economics of the event at stake, it seems that a legal battle might be imminent.

Apparently, according to a report posted online by KCCI late Tuesday afternoon, the following statement was made by a representative of Gannett/USA Today:

"We’ll continue RAGBRAI’s longstanding tradition in 2020 with another great bicycle ride and strong partnerships with Iowa communities to raise money for good causes. Our commitment remains to donate $50,000 to the University of Iowa’s Stead Family Children’s Hospital. We’re proud of the good RAGBRAI has done for the state since 1973."- Andy Yost, chief marketing officer at Gannett.

So, the coming weeks and months will provide some drama in regard to what may or may not happen for next Summer where any "Great Bicycle Ride Across Iowa" is concerned.

I've done RAGBRAI 3 times, '07,'11 and '16. I had hoped to do it again one day.The ride is what you make of it. It can be a week of drunken debauchery or quiet family cycling vacation or something in between. It would be a shame if it got torpedoed because of something stupid like this. You're absolutely right about the Iowa State Patrol. Nothing is happening without their support.

First Trans Iowa, now RAGBRAI... I guess the lesson here is that if you want to participate in a ride don't wait for "someday" because there might not be another someday to be had.