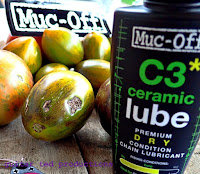 Note: For the Introduction to the contenders and procedures used in this test, please see THIS POST. Also please note that the possibility of a fourth contender never materialized, so this test is just between the three lubes mentioned in the introduction.

Okay, with the six hour limit reached on the first test lube, the C3 Ceramic Dry, by Muc-Off, I am going to take this opportunity to show you my findings. Currently I am almost done with the Squirt lube, and then I will move on to the "control" lube, the DuMonde Tech.

"Dry" lubes are a bit of an irony. Describing something as "dry" that is made to lubricate? Doesn't compute when you stop to consider it, but these lubes are also "conditions specific" as well as being "less messy", so the meaning of "dry lube" is a bit vague in terms of what to expect. I thought I would take a brief moment to give you my take, and then apply that to what I saw with regard to the C3 Ceramic lube, and then also give a quick thought on the DuMonde Tech.

In my view, the "dry" in dry lube is meaning that this lube works best in conditions where moisture in the riding environment is at a minimum, and I also expect less mess. Now, what is "less mess"? Well, I don't expect any build up of "gunk", dirt, or greasy build up at all. Lubes for chains that are "wet" lubes, in contrast, are meant for the more extreme cases where you ride in mud, through water, in snow and slush, or rain. Those "wet" lubes are harder to wash away, stay on the chain doing their job longer in severe conditions, and yes.....the chain will look a fright. I'm all good as long as there is lubrication in those cases. But for this "dry" lube, I don't want to see anything like that. With that said, let's take a look at how the Muc-Off C3 Ceramic Lube did.

Okay, so first things first. The C3 Ceramic Dry lube was run mostly on gravel roads and a big chunk of the time was on some wetter, messy gravel. (Note the seat stay on the cassette image) So, the C3 actually had some "severe level" exposure to grit, mud, and water. The cassette was new when the test started. The latter part of the six hours was on typical, Iowa gravel and it was dry and dusty.

Comments:  Impressive. This lube seems like it does pretty well in gravel conditions, and given that things got so mucky at one point my drive train was skipping and I was fearing I may rip off my derailleur at any moment for about a mile, this is doubly impressive. The chain and cassette are not 100% clean, as you might notice, but there is a distinct lack of greasy build up, and there is little to speak of here in terms of dust or dirt. The chain is not noisy. Shifting was spot on, with the exception of the extreme mucky mile, but that wasn't the fault of the lube.

When I did the "Touch Test" I found some gritty debris left on my finger. the chain felt mildly slick, not oily, and I did not detect anything "wet" at all. This was done in three places around the chain's length.

Contrast this to the current state of the chain with DuMonde Tech on it, (last lubricated in the Summer.....maybe?), I had none of that gritty residue and the chain felt slippery to the touch. Plus, that chain and cassette look cleaner than what I have here with the C3, and that looks great.

So, as I said- Impressive. The Muc-Off Ceramic C3 lube does what a dry lube should do. It leaves your chain slick, cleaner than you'd expect after 6 hours of gravel travel, and free from rust. I had some "outside of the parameters" conditions with this lube and it still held its own. It's got potential here to be as good as DuMonde Tech in my opinion. But let's run the entire test and then I'll make the final verdict.

Speaking of which, I have an hour and a half left to go on the Squirt l then it will be on to the DuMonde Tech lubed bike and after I run that for six hours we'll be ready for the final word. I plan on stopping by with my take on the Squirt lube here in a bit. Maybe later this week even. The C3 lubed bike is getting a complete overhaul/remake/upgrade here, so that chain will not be seeing anymore gravel travel for the near future. That bike will be the subject of tomorrow's post, along with what's happening to it. Stay tuned......
Posted by Guitar Ted at 1:30 AM