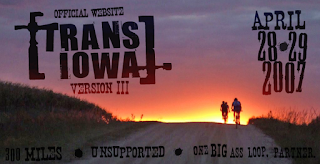 Last week I left off with tales of the event up to the checkpoint. Past that point of the event is a moment that was cemented in my memories of Trans Iowa as being one of the best ever. When Zach Dundas, the author shadowing me for the event that year, reunited with me, we decided to hang out in a section of Level B Road in Tama County. The thought being that (a), it was about as "rural" as it gets there, and (b) we wanted to see how Team Polska was doing as they had overtaken the duo of Ryan and Hannon at the checkpoint in a well told exchange that I won't cover here.

What hasn't been told is how, for several hours, Dundas and I relaxed in the afternoon Sunlight of a late April day without a single care in the world. I recall Zach reclining in his red Pontiac rental car, doors open, with his feet sticking out of the rear door, snoozing. We didn't talk with each other. We weren't even within several feet of each other most of this time. It sounds really boring, I am sure, but to have had some time in a quiet, peaceful rural setting without a worry in the World? Priceless. I am not sure I've had many times in my life where I felt such peace and contentment in just "being", if that makes any sense. Zach? I just hope he had anything similar to my experience. But I don't really know.

So, after this, of course, racers started coming by, and I recall Zach being sort of amazed by the fact that they were so strung out on the road. We then proceeded to follow the course behind the front runners that had gone by us. One by one, or in pairs, we would occasionally catch them, slowing waaaay down so as not to 'dust" them badly. It was dry and almost hot that day, as I recall. Then, just as we turned left onto Ridge Road off  K Avenue in Tama County, we saw a rider coming backward toward us. It was Brian Hannon.

Wow, were Zach and I ever heartbroken for him! He had been pushing so hard that his knee was giving him fits. Something about a pre-event change he made, and didn't test out, a new to him bike, had bitten him. He knew it was his fault for changing something right before an event, but Zach and I were still very sad for him. We did our best to lift his spirits, telling him his efforts earlier in the day were super-human. Eventually, with his head down, he made his way back toward Traer, the last town the route had passed through, and called for a ride. I haven't seen Brian since then.........


Of course, this left Ira Ryan alone at the front of the event. So, now I was very concerned. Where was Ira? You'd think we'd come across him not much further up the road. Right? Hannon said he had turned back not long before we had found him.

So, following the cues I had, I drove with my head on a swivel. Zach followed in the Red Pontiac. Peering ahead, I was looking for any signs of a rider alone. From South of Reinbeck to Dike, Iowa, where the next convenience store was, I figured we would have to come across Ryan. But.......there was no sign of him! Now, I wasn't much for math, and I still am not, but I knew Ryan wasn't going that fast. Eventually Zach and I reached the convenience store, the next likely stopping point on route, and Ira Ryan wasn't there. We still had no idea where Ryan was. I was super suspicious now, especially since I knew Ryan's short-cutting the course in v1 was in his history. Was he doing that again? No way. There was no where to short cut this course that would have given him any advantage. It was pretty much due North from where we had seen Hannon last. But, maybe he was lost? Could be. Wrong turns are not uncommon at gravel events.

Or, was Ryan getting pre-arranged support? Hmm.... That wasn't out of the question. He certainly wasn't carrying much, that's for sure, and he gave me a bunch of his home made energy bars at the checkpoint, saying he couldn't gut them anymore. So, just what was he going to be eating?

At the convenience store, I kept watch up the street, not standing still for Zach's conversation. To be honest, I was so distracted by Ryan's "missing in action" that I don't remember a word of what was said there. I kept walking over to the street from the parking lot, peering up Main Street, to the South, which was the route to the convenience store. Then I saw him.

Ryan was up the street a couple of blocks, chatting with someone in a Chevy van stopped in the street. I carefully watched to see if anything was exchanged between he and the van driver, but saw nothing. Ryan then waved to whomever that was and made his way to the convenience store where I questioned him about his whereabouts. He answered with dismissive, short sentences, saying that I must have missed him, that he got off the route for a bit. Maybe he got off at Reinbeck to look for water? Ryan wouldn't say. The course did skirt the city limits of that village. Hmm..... I was suspicious, but I let it go. But I was also going to keep a very close eye on him through the night.

Team Polska arrived not long after Ryan pulled out of town. They were animated and everyone's spirits who were around them were lifted. Macjei, who was riding his first T.I., was done. He was calling it in there. He offered his stash of goodies to Douglas and his brother, Marcin, who gladly accepted his offer. Macjei stripped down to his bibs and kept pulling out bars, gels, and stuff like clowns out of a circus car. He lined up everything on a edge of a brick wall of the store. It was amazing to watch customers trying not to get caught gawking at Macjei's muscular, slim body, now nearly naked. It was quite the scene!

Then an overweight male lumbered towards the door of the convenience store from his Harley Davidson motorcycle. He asked what was going on here? When we described the event to him, he was flat out amazed. He offered advice and quipped, *"You know what you need, boy?  A got-dammned motor, that's what!" Then he ambled on into the store. We laughed pretty hard about that after he disappeared!

I stuck around for a while and Zach said he needed to take a break, and he stayed while I went on chasing the leaders again. I bypassed a bit of the route in order to leap frog the riders that had passed through already, and staged a look-out at the next convenience store up the road in Janesville, Iowa. I came across David Story and his friends, who were documenting the event in images. They were weary, and it sounded as though they were going to pack it in not long after I saw them. I stuck around, and it wasn't long before a weary Ira Ryan, alone, moved in toward the convenience store.

He didn't waste any time and was in and out quickly. When he came out, I made some comment to break the ice, and Ryan, slowly munching on a cheeseburger, flatly told me that there were flooded roads he had to navigate. No emotion in his voice, so I was a bit taken aback by this, plus I was immediately concerned. Ryan said that the road was passable, so it probably was no big deal, but mentioned that he was surprised by this turn of events. Ryan then whipped out the second cheeseburger, and quipped something to me about that these were a good deal. Two for two bucks, or something. He ate a couple bites, wrapped up what was left and stuffed it into his jersey pocket, and asking a bit about which way out of town, then rode off in the direction I pointed him.

I waited for what was left of Team Polska to arrive, and they weren't far behind. Pietz was shot. His knee was toast and he was dropping out there. He bid Marcin the best. Marcin then asked for information on Ryan's lead, and when he heard that he wasn't far up the road, he set his face with steely determination and took off smartly down the course. I followed out shortly afterward, but took another short cut to reach a point up the course in Hawkeye, Iowa. There I wanted to wait to see how the progress of these two leaders was playing out.

*Note: blue italicized quote is from Zach Dundas' "Renegade Sportsman" chapter on Trans Iowa. I'll be quoting from this book more in the future.

Next: Hanging Out In Hawkeye, Iowa