The project I have been working on throughout the week has been taking shape quite nicely. I have one major component and a tool to get in which are necessary for me to go any further. In fact, I will be looking at completion of this project once those bits arrive.

Of course, I am speaking of the aforementioned Noble Bikes GX5 and the 1X GRX group I am fitting to it. Things have been going well so far with this build and I think it is turning out better than I had hoped.

The biggest issue could have been the brakes. The way Shimano ships the pieces means you have to connect the caliper/hose assembly at the lever, both of which are filled with mineral oil and sealed at the factory for air-tight delivery. Your job, should you accept it, is to connect the two without introducing any air into the system and avoid having to bleed the brakes. Oh yes.....and you will have to cut the brake lines to length as well.

So, interestingly, Shimano has developed a new way to do this job, and with one tip I picked up on the Shimano tech site, the job is actually pretty easy. Well, you could use a third hand, by the way, but it isn't hard beyond juggling a few things at once. It also helps if you have proper tools too.

Anyway, Shimano pre-installs the 'olive' and the compression nut is already partially threaded into the lever body. There is a yellow plug in the back of the lever where the hose should enter into the lever. Cutting your hose to length is an easy process if you have the Shimano guide. Install the barb into the hose. Then remove the yellow plug, (it comes out sort of hard, so be careful!) and then shove the hose up in there, tighten the compression nut with an 8mm open end wrench, and done! Of course, there are little details that make this job easier and successful that you absolutely need to know, but this isn't a tutorial. Just letting you know that "big, bad Shimano" actually does do some neat things.

When the bike is finished I will do a full post on it. Stay tuned. 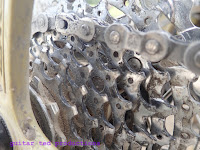 I finished up my six hours on the second bike for the "Lube-Off" recently. That leaves one bike to go and then the full results of the test will be revealed. I have had to pick and choose my days as we have had a spate of wet weather which isn't conducive to testing "dry" lubricants. I figured the rains would kick in once I started this testing! Figures.......

Anyway....... Past editions of this test were easy to judge. The different lubricants were so........well- different, that I had no trouble at all telling you readers which was the best. It was, as they say, "no contest". However; this round has proven to be very competitive. The three lubricants I am testing now I can recommend without hesitation, so I will let that cat outta the bag right away. That said, there are differences, and I think once I detail out the findings, a more clear picture will be revealed which might help you choose what is best for your needs. That's my goal with this, anyway.

So, I am hoping that we do not get anymore rainy days and that things get dry again. We just got a soaking rain Wednesday night, so maybe this weekend will be dry again and I can put a big dent into the final round of this "Lube-Off". 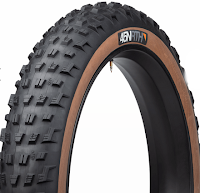 I'm a sucker for skin wall tires because I like the look. It isn't for everybody, and that's fine. I happen to think it is cool. I have a few sets I run on gravel bikes and mountain bikes. But fat bikes? That wasn't much of an option.

Back when the Pugsley first came out, the only fat bike tire you could buy was a skin wall Endomorph. That didn't last long and then almost everything afterward was black. 100% black. Surly did a special run of Nates in skin wall, but if you like Nates, you are an oddball. They are, perhaps, one of the worst rolling fat bike tires ever made by surly, and they rank right up there in overall stature in the fat bike world in that regard as well. So, while I could have gotten my hands on Nate skin walls.......no thank you!

Now I see that 45NRTH has skin wall VanHelga tires. They probably roll a little better than a Nate, and they are tubeless ready. Yeah! According to what I have seen online, they are sub-100 bucks each. Not bad. Yes, you cannot get the 120TPI ones, 'cause those are black only, but 60TPI ain't bad. Nope.

So, will I be getting some? Probably not. I have cake eaters that I bought this past Summer, and I have Flow and Dunder from the Beist family which came on the Ti Muk when I got it. So, I am set for tires for the time being. But, maybe someday........

That's it for this week. Stay warm by riding outside!