Trans Iowa Stories: Why It Should Never Have Happened Again 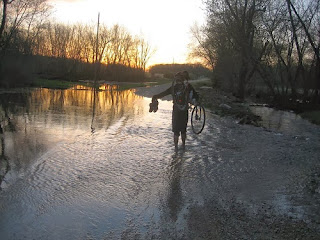 Sunday, April 29th, 2007. I was sitting staring out the front windshield of "The Dirty Blue Box", my beat to crap, metallic blue, 1990 Honda Civic 4 door hatchback. There were 20 minutes left until 2:00pm, the cut-off time for Trans Iowa v3. No one had crossed the finish line in quite some time. Most everyone that had been hanging out on that idyllic, Sun drenched hillside in front of a cemetery had already left. They went to get lunch, went home, or were hanging at the sports bar waiting for me. I was supposed to be having the awards ceremonies at 2:00pm.

I was staring out over a hill on a gravel road which lead into Decorah, Iowa behind me. I'd been sitting there a long time now. I was thinking that maybe I could pack it in and just get the post race ceremonies over with. But, I had to make sure I had accounted for everyone. Richard "Deke" Gosen, one of Trans Iowa's earliest influences, had drilled that into me over the past two years of Trans Iowa. You must account for all the riders! So, one more time, I went over the check offs and markings various folks had made, including myself, to see if anyone was still hanging. Once, twice, three times I went over that roster. There was one guy not accounted for. Meh! Maybe he actually came in, or called in, and we missed checking him off? Dang it! I really wanted to get this awards ceremony done. I was drained. Exhausted. I'd been up since 3:00am Saturday morning. Over 34 hours of being awake. No cat naps. I wanted to get this over with and go home. But.....I promised I'd wait until 2:00pm.

I was losing my resolve. I had to go. I reached with my keys to insert them into the ignition, and looked up. What?!!! Was I seeing things? I thought I saw a white, rounded object just over the horizon, swaying, like the movement of a cyclists head. Yes! It was the last finisher of T.I.v3.

I sprung from the car, yelling encouragement. Team Polska, who were still there, unaware of me, heard my yelling and jumped into action. Banging pots with sticks and yelling in Polish, they escorted Mike Denehy to the finish line, just as they had for 22 other finishers, except Ira Ryan. I shook Mike's hand, and jumped into the "Dirty Blue Box", hit the ignition, and headed over to the awards ceremony. Which.......I have no memory of at all.

My contract was fulfilled after shaking Mike Denehy's hand. I had done what I needed to do and I carried out the mission that Jeff and I had set out to accomplish after T.I.v2. I promised myself I would carry this out until the end, and right at that moment, I think my mind just switched off. Later, after all was said and done, I wasn't thinking about a T.I.v4. I was done with Trans Iowa. There were several reasons why.

First, and I have said this before, this was Jeff's idea, and I always felt I was just there as a helper. Despite the perceptions of many, I understood why Trans Iowa got going. I was intimately a part of that, and without Jeff? Well, there was no way it would have ever happened. I felt it could not be Trans Iowa without him, despite the fact that I had just put on a Trans Iowa without him. But then again, I was too close to things to see it.

Secondly, this event had undone me in many ways. The stress of the cue sheet debacle, the extra responsibilities regarding the communications with riders, the venue, and volunteers. It was far more than I had expected to have to deal with.

Then there was the huge, weighty responsibility I felt for all the riders. I hadn't ever considered this facet, and to be perfectly honest, while the feelings were there, I could not comprehend in 2007 what that was that I was feeling. Then there was my wife and two young children to consider. The day I returned home from T.I.v3, my wife needed to be taken to the emergency room, and I was so out of it she ended up driving herself to the hospital. I was humiliated. I blamed Trans Iowa. This on top of the stress they had to endure the previous week watching me go through the wringer trying to get everything ready to go.

Yes, the event had 24 finishers, and LOTS of good will and feedback which was very encouraging, but deep down inside I was done. How "done" was I? Well, I took out the milk crates from the "Dirty Blue Box"with the stuff I used that year and set them in the garage. I never touched them again for probably five years. I had such hard feelings about that event, it took a long time for me to actually put everything away and deal with the mess afterward. I just wanted to walk away from Trans Iowa.

The event was done. Over. I wasn't going to say anything. Ever. I was just not going to put it on again. Privately, I shared with a few friends that I had very deep set feelings about quitting the event. This was met with some understanding. And then three big things happened which swung me the other way. This wasn't the last Trans Iowa, but it almost was.

Next: The Reasons Why It Happened Again
Posted by Guitar Ted at 1:30 AM