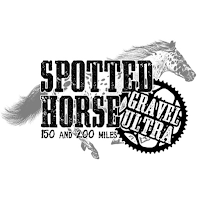 The big event on gravel for Iowa in Fall is now the Spotted Horse Gravel Ultra. It is slated to go off this weekend. The event is put on by Sarah Cooper with help from some fine Iowa gravel folks like Steve Fuller and others. Basically the same bunch that do Iowa Wind & Rock in April.

The events are pretty much take-offs on the Trans Iowa model with self-navigation, self-support, and long distances the main features. Sarah is based in Madison County so most of what they do is West and South of there. (Read: very hilly and remote for Iowa)

This weekend may prove to be pretty challenging with rain in the forecast for Saturday and what with the several days of soaking rains we've had previously to this weekend. Sarah likes her dirt roads down there, so I am thinking it is going to prove to be a big bite to chew on for all involved.

It's been fun to follow along on Facebook as far as folks getting wigged out about the weather and seeing the things Sarah has been juggling in regard to directing things. Ah!......the memories! On one hand I can certainly sympathize, on the other, I am blessed not to have to go through that anymore. Hopefully the weather folk are all wrong about the rain and things go off unhindered by weather. But if not, I hope everyone stays safe and good times are had. Those times when things aren't according to plan are usually the best memories later, but also may be the most stressful when they are being made too! 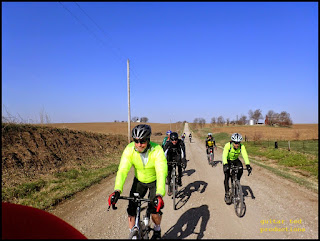 And.......yeah! It's supposed to rain up in the Cresco area as well. I don't know what will happen for certain, but the plan is for me to make my way up there regardless, and if it looks bad, I suppose there will be a call made.

This one isn't being organized by me, so my best advice would be to pay attention to the Facebook Page for the event and monitor that for any announcements that may or may not be made there. Cresco Bikes is this Geezer Ride's official host, so they get to make the call, not I. So, being that I am the instigator of these Geezer Rides, I gotta go there, but you should keep an eye out on the weather.

As I wrote yesterday, it seems that this Fall is quickly becoming one that will be dominated by rains, wet grounds, and some flooding. Great..... The best season to ride and it looks to be getting squashed for the second year in a row now. I sure hope this pattern breaks down soon and that we can get into another dry stretch, because I am sick and tired of all the wet weather now. If you are from the Southeast, you probably are hoping for a change as well, only it isn't due to rain. No......they are getting roasted down that way.

Earlier this year, (I think it was), I posted here that my friend Grannygear had bequeathed to me a bunch of single speed stuff he had no use for anymore. Part of that treasure was a set of White Industries ENO hubs. They used to be on Granny's old Karate Monkey back in the day.

These hubs had seen a lot of grinding in SoCal dust over the years, so when I got them they were dingy, dull, and the rear bearings were ......ah....less than smooth, shall we say? Yeah. They needed replacement.  With gravel season coming on I sat these aside and gave it some time to simmer on the brain. Then I came across my old set of Hope Pro 3/Salsa Gordo wheels. The free hub pawls shelled out on that hub and I had zero luck here in the US getting a replacement free hub body. So, those went on the back burner long ago. Well, when I found them languishing in the corner of the Lab, I had a thought. Let's unlace those Hope hubs, clean up and freshen up the White Industries hubs, and lace up a killer set of QR single speed wheels.

I looked up how to service the White Industries ENO rear hub, and it looked easy enough. The bearings would have to be ordered, and then I could pop those back in. But then I discovered something under a pile of crap in the bottom of my work tool cabinet. It was a tandem specific rear White Industries hub which had a defect. Seems the hub shell was polished just a wee bit too much and there was a crack in the middle of the hub shell which when the hub was torqued, it distorted the hub shell, revealing the crack. The wheel was warranted, I cut the old hub out, since no one wanted it, and saved it for.......

Well, I had no idea why I saved it, but guess what? It had the exact bearings I needed. Boom! Swap-a-roonie, and I had a freshened ENO rear hub ready to roll. Now I have one rim freed from its grip to the Hope hub it was laced to and one more to free up. Then it's build wheels time. Hopefully that will happen this weekend.

This new wheel set will go on my OS Bikes Blackbuck, a bike I have to get up and running again. The Gordo rims are the forerunners of the "wider-is-better" trend in the MTB world and are 35mm outer rim width. I had these on the Blackbuck once before and it made for a stellar combination of rigid bike and cushy wheels. I have something special in mind when I lace these hubs up, so stay tuned.....

That's a wrap for this week. As always- Thank You For Reading Guitar Ted Productions!
Posted by Guitar Ted at 1:30 AM