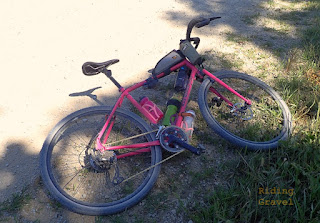 Tuesday news dropped that WTB had released some new carbon rimmed wheels. Well, as things would have it, RidingGravel.com was chosen to pre-ride/test a production set of wheels ahead of the launch date. (Insert Standard Disclaimer) I ran these at first on the Noble Bikes GX5, but as Gravel Worlds approached, my plan was to use the wheels there, so I swapped them over to the pink Black Mountain Cycles MCD. These wheels are shod with WTB Resolute tires as well, which are some of my favorites.

I'm pretty fortunate that I've been able to ride on these for almost a month now. Riding Gravel was one of only a few sites that were given this opportunity, so I am very grateful for that as well. I figured that before this review is over, what better venue to use them at than Gravel Worlds? If I can manage to complete the 150 mile ride, it will provide quite the test for these wheels, which is what the readers of Riding Gravel deserve.

So, I've got my work cut out for me! I'll have a new post up on Riding Gravel after the event, but I also will be sharing more about these wheels, and the other stuff I used, after the event report next week.

So, as you read this I probably am riding on my way to Gravel Worlds with Tony, who I've made this trip with several times before. We're going to give this 150 mile deal another whirl, and see what happens, plus see some people we have not seen in almost two years or more.

You've followed along as I've gotten everything dialed in and now it is time to put that all to the final test in the Lincoln area on some fine Nebraska gravel roads. I've been here before, so there isn't much I haven't seen before.

That said, they managed a few newer roads and I see many, many turns on the cue sheets. The course is almost a double loop affair with the tie in at Branched Oak Lakes for the only checkpoint which we will go through twice. It is a unique affair, but given these times, it makes sense to use one place and keep costs and chances of exposure to COVID minimized. Such crazy times.....

What this course does that other Gravel Worlds courses never did before is keep us out of the headwind for long stretches at a crack. I can recall going - more or less- 50 miles into a headwind at a couple Gravel Worlds. The longest single stretch before a turn this year is 5 or 6 miles and that happens once. Most turns come at about 1-2 mile intervals. I always notice how many turns the cues say to make in ten miles. Most times for Gravel Worlds 2021 that number is 5, a couple more times it is six, two more times it is double that for town navigations, and one time it is 3- coming out of Lincoln to start- and there are a few with more than 6.

That all to say that we will be in and out of headwind situations due to the loops all day. That is if the wind doesn't switch up on us! But I like that this gets broken up instead of taking a big, long push into some headwind during the heat of the day. That's brutal!

After I return on Sunday I will start writing up my report, which typically takes three to five days on the blog to unload on you all. So, you can expect some images, stories, adventure tales, and maybe a story about my finish. But don't hold yer breath! At least on that part about finishing. I've tried this event eight times before and have finished one of those times!

Remember When 29"ers Were Weird?

The old 29"er. Most folks don't even bat an eyelash when they see 29"ers anymore, or even think that 29 inch wheels were once oddball and 'revolutionary'. But.....that they were!

I was reminded of this when a commenter brought up some questions this past week in the comment section regarding the On One Inbred. The Inbred, one of the first British 29"ers you could get, was kind of an outlier. Most bikes from Britain at the time with fat tires were decidedly 26" wheeled. This American idea of using 700c format rims with 2" tires was 'daft', as they might say over there, or maybe they said worse. Probably worse.

Anyway, this comment I received led to an old screen shot archive of On One's website, circa 2006, where the idea of 29 inch wheels is discussed. For context, 29"ers were, at that time, still really weird, and there was a pretty big push-back against the wheel size from many places. Vendors and brands were pretty sure this 'fad' was going to die. many said they would "NEVER" make a 29 inch wheeled MTB (Specialized, Giant, Yeti, to name a few)

So, obviously 29"ers grassroots support finally pushed all the major and second tier brands to do 29'ers. The aftermarket components followed, and now 29 inch wheels are 'no big deal'. But what all that did back in the 00's was make bicycle companies and industry partners very wary of missing "The Next Big Thing®".  So, when the 650B thing came around, the industry wholesale changed enduro bikes and long travel MTB's over to the slightly bigger wheels. They didn't wait for a 'grassroots' movement. Same thing with gravel, and e-bikes (HPC) rigs.

Sales obviously matter, but without 29"ers the industry - perhaps - would still be reticent to move off anything not traditional in terms of cycling. New trends like electrified bicycles, gravel bikes, and the like might be still-born ideas if it were not for the way that 29"ers broke the mold of 'sameness' in the industry which had been in a rut since the mid-90's. That being the time when mountain bikes finally figured out what they wanted to be. 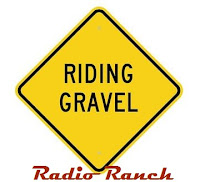 The Riding Gravel Radio Ranch rolls out another episode and just in time for your trip to Gravel Worlds- (or other places). Andy, of Andy's Bike Shop, and I discuss the news and the gravel scene.

I'm pretty stoked that the podcasts have been rolling out on a fairly regular basis since the beginning of 2020 when we were working on Episode #40. This after the podcast had been in existence for four years! That's not a very good average number of podcasts per year!

I think it is safe to say that we've improved on that number since then!

Okay, I'm off for my adventure, but I have scheduled posts for Saturday and the "Trans Iowa Stories" post will also appear Sunday. See ya on the other side.....

Good Luck! Look out for Pirates!!

Good luck with the big race - You know they have shorter events...

Have a great weekend! Thanks for sharing your insights on your selection of bike, components, clothing, etc.

I'm really interested in what you think of those WTB wheels. I've had my eyes on those rims for awhile.