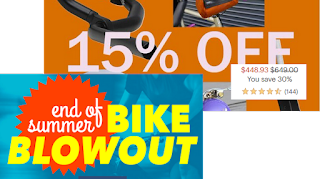 The Ships Are Coming In:

I have mentioned before in this space that when the inventory hit the warehouses that we'd go from zero to overstocked in a big hurry. Well, it has started already.

I have seen several sales promotions recently within the last two weeks, and I bet there will be many more on the heels of this starting now. (Ditto for other segments in the economy)

The image here is all taken from promotions I have seen online. 15% - 30% off is not uncommon to see, and I suspect that deals will be available throughout the Winter as bicycle season wanes in this hemisphere. The big question is, "Will there be any takers?" Inflation is eating up discretionary income at an alarming pace. Given that utilities and necessities to make it through Winter will likely be somewhat of a burden on many, I would be surprised if sales were anything but tepid.

But I could be proven wrong there. Time will tell all.......

I guess no one noticed that the tire I used to demonstrate the tubeless mounting techniques I posted earlier this week was a new WTB Vulpine 700 X 40mm tire*. Well, I guess I slipped that one by y'all right out in the open!

Anyway, yeah..... New tire day again and I always am excited to see how tires will turn out once they are mounted. The anticipation of the process, the outcome once I am done, and then that first ride. Good stuff!

But I have to say that I was a bit deflated, (sorry for that pun!), by the tire as it was evident to me at the onset that the casing didn't look like a 40mm casing. It's funny when your mind and eyes can hone in on details after you've done something so many times. I just knew this tire would be a bit narrow, and once I had it on, (at 40psi, by the way), I was saddened to find that my suspicions were correct. This wasn't a 40mm tire.

Now with a few days under the tires and a couple of short rides, one tire measures just shy of 40mm and the other just shy of 39mm. Ehhhh!  Yeah, close, but not quite. Quibbling over a millimeter? Yes. And what is more, the promise was 40mm. And maybe these will get there. We'll see.

At least they are fast, supple, and smooth. I liked the 36mm Vulpines, and these should be a bit better. Still, I'd love a wider one of these. (*Standard Disclaimer)

Excuse Me- GT Bikes Would Like To Have  A Word With You:

Litespeed made a splash this week with the introduction of a titanium ('natch!) frame which they dubbed the "Ultimate G2". A new platform which they claim is "..a bike that accelerated and climbed with the targeted stiffness found in premium carbon gravel bikes.."

Whoa! Big claim there. So what did they do? Well, Litespeed says that; "It starts with the new visual signature of the Ultimate G2: Interlock Dropped Seatstays." What's that mean? Well, just think of GT Bikes' "Triple Triangle" design and you'll be there. That's really all this is. Also- I am not claiming GT developed the design first. I realize that others did a similar thing as well previous to GT Bikes. That said, it was GT that made hay with this and put the design on the map.

Comments: So, how does a triple triangle thing make a bike stiffer? It effectively shortens the top tube and seat tube, thereby making those lengths of tubing less flexible than they would have been.

This should make the rider 'feel' faster because the tubing will be less effective at absorbing vibrations than it would have been without the triple triangle deal, and let's face it- what a rider feels has a lot more to do with 'speed' than the stopwatch does. (Cue high tire pressure believers here)

Not only does this new Litespeed bike have the ol' Triple Triangle' signature here, but they have some pretty backward geometry going on as well. Larger sizes have less than 70mm of bottom bracket drop, a 72° head tube angle, and 50mm of fork offset. Wow! Talk about a 2015 gravel bike design, this is it in spades.

But it will sell and some folks will think it is the bee's knees. Ride on then..... 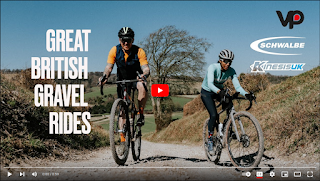 I know that this has been out a while now, but I just came across it on social media of late and thought I'd get a few opinions from my U.K. readers on what they thought about this.

So, what does the "greatest gravel rides in the U.K." even mean? How do you contextualize this thought?  Well, for me it starts out by knowing that the U.K. is 1.7 times larger than Iowa. Okay, we have about 70,000 miles of gravel and dirt roads here. According to what I can find on Google, the UK has approximately 33.528+ miles of unpaved roads. I'm not sure that is close, but that's still a LOT of unpaved road ways. To distill that down to "great gravel rides" in one book? I don't think that's an easy task. But you folks in the U.K. know better than I.

I think it would be fun to go find out though! I'll have to see to it before I get to aged to pedal!

That's a wrap for this week! October starts this weekend! Wow! better get out and ride before Winter comes!

I've read a couple of reviews of the Litespeed Ultimate and I have to say I'm intrigued. In the Chicago burbs where I live quality gravel roads are getting harder to find without going way west. A high percentage of my riding is pavement and municipal "kitty litter" trails so I would appreciate the snappier geometry. I don't think stiffer is always better. Some of these new bikes don't come alive till you start putting 300 watts into them.

@Phillip Cowan - My friend in SoCal, Grannygear, rides a Lynskey (Original Litespeed owners) Ti GR250 that he dearly loves for the ride feel. Titanium is pretty springy. I even notice it with my Salsa Ti Muk.