Last week I mentioned in my last "Gravel History With Guitar Ted" that I had done an event called "Night Nonsense". It being the other night based gravel grinder that I had done. This was an event put on by then World of Bikes mechanic, Adam Blake, out of Iowa City. The event was only ever run once and that was back in 2010.

This was still back in the times where we all were eager to go try other events and especially Iowa based events, because there weren't many back then. Adam was putting this on in the traditional "grassroots" way with zero entry fee and a very homespun approach. If I recall correctly, we actually left on this adventure from his place in Iowa City. If it wasn't his place it was someone elses house, because I recall being in a garage prior to leaving on this really wild adventure.

I used the Gen I Fargo on this ride, and as I detailed in my post about lighting, my lights were really not very effective. Add in that it rained the entire time I was out, and that was for eight hours, and you can see why this event was a testament to perseverance in many ways. Lighting was certainly one of those areas I was challenged in.

I don't have any images from the actual event. I was either battling navigation issues, blinding rain, or fatigue. Fortunately, I wrote a ride report that helped me recall details and, for some reason, I have this way of remembering road names. That odd 'superpower' I have allowed me to somewhat help with this story to tell you about where I was on this ride. 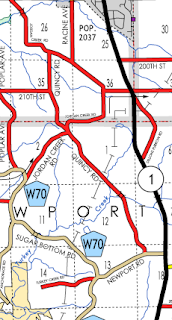 This bit of Johnson County map to the left shows some of the roads we took back then out of Iowa City to the Northwest. We used a LOT of blacktop roads. Gravel roads we used were Jordan Creek Road, Quincy Road, and then we got dumped on HWY 1 into Solon and that ended up becoming a real mess.

By this time into the event I think I'd been off-course three times and I was dealing off-and-on with a few foreign speaking riders who were being followed around by a support car, (very uncool), and were more lost than I was. Being that this was a self-supported event, the entire vibe surrounding this group of folks was off-putting to me, so I was in a big hurry to ditch them off as soon as possible. This part of the event also marked the heaviest rain and lightning part of the event as well. I remember now, it was really crazy!

But reading my report, I had forgotton all about being on Seven Sisters Road and eventually coming into an aid station promised on the route. As far as I can figure now, in 2022, this was in an area of confusing streets in an area called "Western College". Not only that, but some police activity and an automobile accident only added to the surreal nature of things.

Leaving the aid station, I came across a burning car! Wow! Somehow I do not recall that. (Good thing I write this blog!) That makes this likely the most wild, crazy gravel event I've done right there. But wait......it gets weirder!

I recall a bunch more pavement crossing I-380, it seems, and then I definitely recall going right by the Eastern Iowa Airport with all of their runway lights blazing in the night. That was quite a spectacle, and this road made me feel as though I was trespassing on airport property. Whether or not that was a fact, I still do not know now. 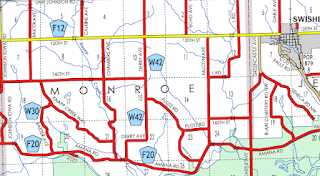 After the airport I recall going through Swisher, Iowa, which is a small village I lived in back in the very early 1990's. A place from which I used to ride gravel roads to the Amana Colonies and back on occasion. Well, this route took me on some of those same roads. That was a fun part of this event.

Getting to the Amana Colonies at night, after 2:00am, and with not a soul in sight, was something else I will always have a sharp memory of. All the lights were on in the streets, businesses were lit, signs were on, but no one was there. It was like an empty movie set. Actually, I was a bit creeped out by this, and since the event was in late October, all the more so.

Then it was across the Interstate on busy HWY 151 to a hard left on 160th Street, a Level B Maintenance road which, after all the rain, was a quagmire of clay and mud. Of course, I was forced to walk the distance of approximately two miles to the next stretch of gravel. This is a remote, forsaken bit of Iowa with no residences on it until you get closer to gravel on the Eastern side.

As I approached the first home I'd seen since leaving HWY151, a chorus of howling dog's voices split the silence asunder and scared me half out of my wits. It was closing in on 4:00am, after having left the start at 8:00pm, and I was delirious with fatigue and pain by this point in the event. So that whole road traverse and then the dogs wailing, yeah.... Just a crazy ride!

I found a van full of guys about this time and they were with the the event. They were out feeding riders pizza and beers and sort of doing ride recon for the event. Apparently, I had been missing on their 'radar' for a bit and was supposedly the last guy out there yet. Everyone behind me had retired and most of the others had finished.

I bailed at this point when I found out everyone else I was with had finished already. To make them wait in wet clothing in chilly temperatures for me to finish in a couple more hours seemed pretty selfish of me. And I'd had enough adventure for the evening anyway. So, I climbed in the van and went back to the start.

So, there's some more of the story there I hadn't told all of about this event. It was a pretty good event, which could have gotten better with refinements, but it wasn't to be. I thought we had run through some pretty interesting territory and some ideas for future Trans Iowa events were actually spawned by what I'd seen of the territory we were on.

I thought that there were just too many paved roads, but in this part of Iowa, the I-380 corridor, it's tough to get much of the gravel to connect for a paved-free route. I recall that this was more of an issue getting into and out of Iowa City, and once we had escaped that we were in areas where gravel wasn't hard to find.

This event and the "Moonlight Metric" seemed to my mind to be really unique, fun events that could have had a place in the gravel scene yet today. But for whatever reasons, I just don't see a lot of night time gravel options. Maybe I'm the weird one, but that seems off to me.

The "Night Nonsense" and "Moonlight Metric" were two unique Iowa gravel events that disappeared far too early. 2010-2012 were years where I felt like Iowa was going to put itself on the map as 'The Gravel Road Riding Capitol", but the opposite occurred and for many years Iowa was far behind the neighboring states in terms of quality gravel event choices. That has always baffled me, because Iowa has some of the craziest, toughest, and most scenic gravel anywhere, but it is what it is.

Fortunately Iowa has caught up in the 2020's with nice gravel events and hopefully that stays that way for years to come. But c'mon! this whole nigh time gravel deal is a thing! Let's go!

Some of your post feel like you are riding with me. Night gravel is a wild thing people really should experence. Central Kentucky with its elevations can be a joy under the stars. The moist night air keeps the dust down, rouge spider webs form a protective wrap around your face and exposed skin, and the strangest grouping of animals can be on que around the low spots nearing water access.

One thing though... Bring a real tire pump, not one of those tiny space saving ones.

@teamdarb - Thanks for that comment! And to your last point about pumps- YES!

Interesting/ neat crank setup there. Can you provide any details? Chainring, crank model, etc. Are you still running it?

I ran it this way from 2010 until not long ago. I ended up not liking it and swapping out to a triple crank recently.

Ah ha, thanks! I have a similar crank/ setup on a CX/ gravel/ fat tire road bike, but rings are on the outer and middle. I think it's 46-34, and 11-36 10sp rear. Low enough for most stuff, except maybe the steepest slogs.