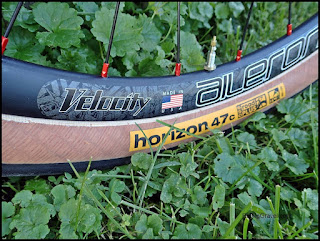 Back in 2016 WTB shocked the gravel world with the "Road Plus" idea. It was a 650B sized tire, but not in the traditional 42mm size. This tire was a 47mm width and brought with it more volume than the skinnier 650B tires did for road bikes.

The first tire they debuted, the Horizon, was a slick tire, but it did okay on gravel. Then the Byway came along, and the Venture, and the Sendero. Meanwhile, other brands jumped onboard. Panaracer, Terrene, IRC, and others all started offering 650B X 47-50mm tires.

The gravel bicycle manufacturers responded with advertising for swappable wheel sizes. Salsa Cycles Journeyman was sold with either wheel size, as an example. Other brands advertised their versatility in that they could support 650B wheels.

Wheel manufacturers came onboard, of course, and many company's press releases contained new information on wheels including that smaller diameter wheel, the 650B size. But in the last few years, the heat for 650B has seemed to cool off some. I've noted less tire news. I've noted fewer 650B alternative choices in wheel news. I've noted less talk about 650B in new bicycle introductions as well.

Now, we have to take things in some context here. The past two-plus years we've seen economic weirdness. Supply chain issues still persist, and those issues certainly have affected the more niche categories of cycling than others. So, we can probably point to the pandemic as a reason we are not seeing more 650B news.

That said, I still find it odd that the marketing talk has cooled way off for 650B. I'm not sure we can read a lot into that just yet, and more time will be needed to really get a handle on what is up with this wheel size.

However; if I had to make a comment on where I thought 650B was in terms of relevancy to gravel/backroad riding right now, I would say that 650B is definitely waning in popularity. At least on the high-end, and on the OEM side. There are riders committed to the size, I am sure of that, and I don't think that this tire size will go away for gravel, but I also do not think it will be as prominent or an option many times going into the future.

I do think 650B has a place in cycling. Rando riders like that size. Smaller statured folk need that size. So, I think the 650B wheel has its place, but I also believe that most adult humans should ride the biggest wheel available for their size, and for most of us that is 700c right now.

I haven't ever ridden a bike with 650b tires or wheels, but the thing I always thought was strange was the committment to the 47mm tire width. It always seemed like the advantage over 700c was going much wider, like some of the 2.2" clearances and tires that were (probably?) the next most common size. But I feel like if they had a drop bar 650b setup with say 2.4-2.6" rubber, that would've possibly been more appealing.

@DT - The idea with "Road Plus" was that you could slot in a 650B X 47mm tire, deemed to be the widest that would fit 'most' gravel frames in 2016, and have a tire which would be approximately 7mm - 5mm wider than most gravel tires at that time with more volume to boot.

From that measure, I think Road Plus was an ideal compromise. What you are suggesting would have not been a feasible way to go since about the only bikes that would have worked in that vein were Fargos and Fargo variants- not the typical road bike drive train based "gravel bikes" of that day. A 2.4" + wide 650B tire is going to push you toward MTB, 1X drive trains, and you lose that top end speed of a road bike drive train along with ending up becoming heavier in the process.

Interesting to note that Salsa actually did offer a 650B X 3" tired Fargo at that time.

I wonder if part of it has to do with clearances getting better on modern frames? My warbird clears a 700x45mm tire with no issues. For me, that extra 2mm of tire width that a 650b offers isn't worth the effort of swapping wheels for, let alone the cost of purchasing a second wheelset and tires.

I do really like 650b as a wheel size for bikes designed for smaller riders. It makes a lot of sense there.

@S. Fuller - Yeah, maybe it does have something to do with modern, higher clearance frames. Manufacturers and especially retailers despise multiple SKU's of anything, and wheel sizes drive them nuts. Sales people sometimes have no idea of what the benefits/negatives are, and teaching a rolling roster of employees is tough. Just make it one size fits all! :>)

It all probably factors in to why 650B seems to be fading a bit.