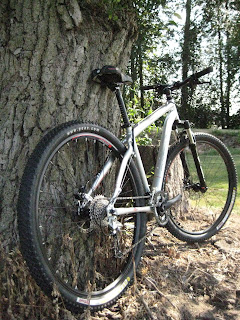 <=== 2009 Raleigh Mojave 29"er. Expect big price increases across the board on 2009 bicycles.
I've been perusing some companies 2009 product and I won't lie to you, my eyes are having a hard time believing what they are seeing. Especially when I start looking at MSRP's. (That's "manufacturers suggested retail price" for all you acronym challenged folk out there)
I have been hearing about this coming for months now, but just like anything else in life, you just don't seem to really grasp something until it hits you. Man! Are the 2009 prices going to hit us, or what?
Here's an example of what I mean: In 2008 you could buy a sub 1000 dollar 29"er easily. Diamondback, Marin, and a couple others had some decent rigs coming in at $650.00- $850.00 that were pretty much Shimano Deore level rigs with a dart fork and Avid mechanical brakes. Decent stuff. Okay, now take basically the same rig for 2009 and it barely stays under a 1000 bucks! That's right folks, you are going to be spending about 150 dollars more for essentially the same bike as this year. (At that price level. The percentages have even greater effects when starting out at higher retail prices!)
Last year I saw a couple of single speed offerings that were really nicely spec'ed for somewhere between $1200-$1500. I thought it was insane for a 29"er single speed, but you know, there are folks out there that will plunk down the cash for that. Well, I just recently saw the specs on a 2009 model that resembles the stuff I saw in '08 and it had a MSRP of 2 grand! For a single speed 29"er? Yeah..............crazy!
Some of the early 2009 models are already out and I know that those companies are taking a beating amongst the cycling public for "gouging the consumers", but wait until the wraps get pulled off of everyone elses '09 products. Then we'll see the reality. Every bike companies prices are going to jump up a significant amount.
And you know what is funny about all of that? I work at a shop that has '09 bikes in some models already, and they are selling as fast as we can build them! So, while folks will complain, and loudly at that, they will most likely still be buying bicycles. At least if what I am seeing is any indication.
I guess I shouldn't worry about it. But these new prices have my eyes popping outta my head. I suppose I could start buying cheaper beer.......................
Nah! That ain't gonna happen!
Have a great weekend and ride, ride, ride! (Go Leadville Racers!)
Posted by Guitar Ted at 5:33 AM