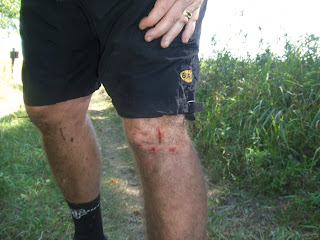 <===I got something to remind me of Sunday's fun for awhile.

Mrs. Guitar Ted was on call, but working at home, so she urged me to take the opportunity to go ride my bike. (Does she know me or what?!!)

I owe her big time!

The single track showed no effects from the rains of mid-week. The dirt was dry, fast, and hard. I took advantage and went a little faster than I should have into a corner with the results shown here. It's okay though. No bikes were harmed in the making of these marks on my body! 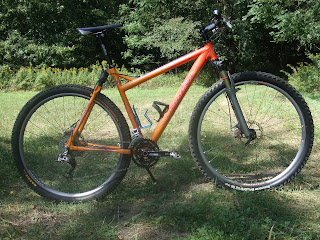 <===The Dos Niner with the Spinner 2Nine RLC fork.

My bikes of choice for the day reflected the work I needed to do for Twenty Nine Inches. I am testing out this Spinner 2Nine RLC fork for the site. So far, I'd say it's a decent fork, but it isn't broken in, and it is way too early to make a call yet. I think, based on the early indications I see, that it will fare well though. I mean, it's a budget priced fork, so I have to keep that in mind. 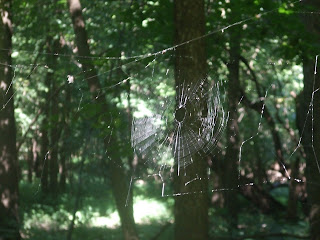 <===Spiders are still in business out at the Camp.

When I signed in at the North Unit, there was a massive horse show going on. As I signed in, I noticed that three folks didn't bother to sign out on Saturday. Not good! Gotta follow rules, since this is a privilege that can be taken away if folks start circumventing the rules. I realize it is a hassle to sign out if you ride on the south side, but if I can manage to do it, then I don't see any reason why everybody can't do it. Heck, you could always designate a "sign out person" to do the dirty deed. All right........nuff said!

Anyway, I got outta "Horse Town" and went over to the south side to ride. What a great day to be in the woods! Super quiet and I had the place all to myself. 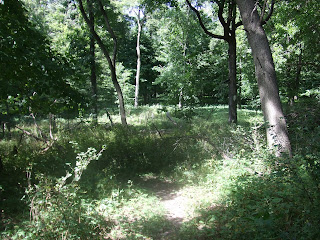 <===Sometimes you just gotta stop and count your blessings!

Like I said, the single track was fast and dry. The recent trail work has yielded an excellent flow and raised the fun factor a ton over here. While it isn't as technically challenging as some stuff on the north side, it isn't easy either. Especially now with the better flow, you end up going for longer stretches which taxes your body more. And of course, there are little sections that keep you on your toes. Like the little rocky outcropping on top of a little hill out there. It's rough, has a distinct line through it, that if you miss will stop you dead in your tracks, or cause a pedal strike. Both happened to me today on two separate laps. 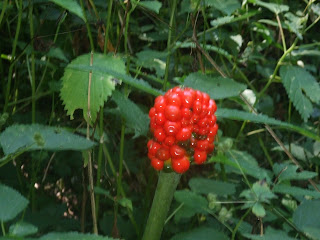 <=== Anybody out there know what this is? It was sooo red, it was scary!

I was in such a hurry to get out to The Camp today that I forgot my water bottles. I ended up stopping in Janesville on the way up at a convenience store to get a gallon of cold water. Since I had to stop after each of my laps back at the car, it worked out okay. I took my Blackbuck out on my third and final lap of the day to check out the next fork in my testing. I had a Reba mounted up front, but not just a Reba. A Reba with a Chris King "Plus Five" base plate. That little gem gives your frame enough clearance to clear the control knobs on a fork's crown in case of a crash. I didn't need it on there, but I wanted to see how that might reflect on handling, since it gave me an axle to crown measurement of close to 500mm. 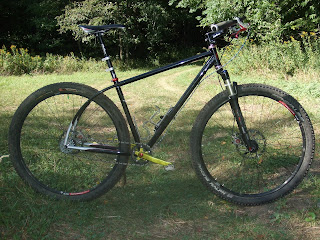 <===The Blackbuck with the extra long Reba!

In case you were thinking that this would "ruin" this ride, think again. It was one of the best handling combinations I have run on the Blackbuck yet. What a fun way to end the day. I actually thought the Blackbuck was faster than my geared Dos Niner today, although to be honest, with the trail conditions as they were, anything would have felt pretty fast.

Well, as they say, all good things must come to an end, and this ride finally did. I got myself back home, cleaned up, and settled in to a big helping of spaghetti and meat balls served up by the best wife a guy could ask for. Thanks Honey!

I sure hope your weekend is going well too. One more day to enjoy this awesome end of summer weather we are having. Get out and get some!
Posted by Guitar Ted at 8:29 PM