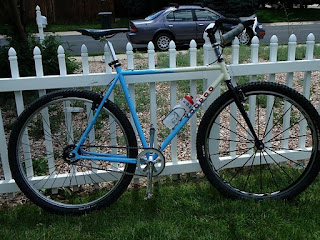 <===Monster Cross/Adventure bike models will be coming your way soon!

A couple of days ago I mentioned the "Adventure Bike" concept. Here's some more proof that other folks are thinking along the same lines. Seems that VooDoo is playing with the idea and this "test mule" is based off of their 28"er Agwe model.

Look for more things to start popping up from other established cycling marks soon! 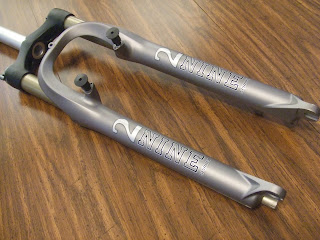 Last year, Twenty Nine Inches tested a RST M-29 fork. This year we have the opportunity to test a Spinner 2Nine Air RLC fork. This fork is another "under the radar" choice for budget minded 29"er riders. We'll be doing a full test on this fork on Twenty Nine Inches, but my initial impressions are that it is a pretty decent fork so far. 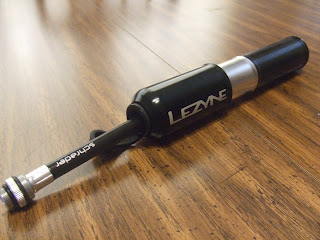 <====As far as mini-pumps go, this one is pretty impressive!

I also have the honor of testing out this little gem, the Lezyne Alloy Drive S. I have a bit of a write up on this at the site called The Bike Lab that I scribe for.

It's a well made, well designed pump that features that little hose which makes the pump a lot easier to use without bending or breaking a valve stem. I like that. It seems to push a pretty decent amount of air with each stroke too. I'll have some further updates coming at The Bike Lab. 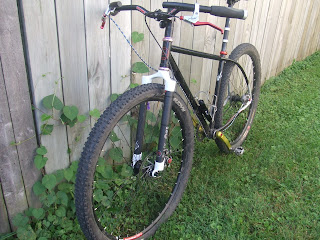 <===The Blackbuck with another "shorty" fork on it.

I'm still testing forks on the Blackbuck. I have one more rigid fork to go before I move on to the suspended forks I have in mind. I don't mind saying that I've gotten pretty speedy and good at fork swapping this summer!

The other thing is, I've gotten a lot of ride time on the Blackbuck. What a great rig! I certainly do not regret getting this bike at all. Too bad it doesn't come in more sizes than this, because I think this bike would be a lot more popular than it is. I guess that isn't the point though. The frame is a nice blend of stiffness and steel ride quality. Just right for single speeding, I'd say. You can gear this bike up, but I just don't ever see myself doing that. I've got another bike for gears that could be a single speed in the El Mariachi, which I don't ever see making into a single speed. Funny how that works!

The week has been a kind of a hectic one. Change of schedules for everyone make things a bit stressful. Transitioning into fall is a bit tumultuous, it would seem. Hopefully things are smooth where you are. I hope to get a ride in Saturday morning at the Camp. I've got another fork on the Blackbuck and it is time to ride it!

Have a great weekend and ride your bike till yer stupid!
Posted by Guitar Ted at 5:17 AM