Singing In The Woods 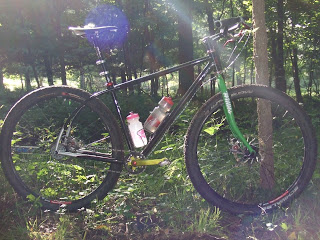 <===Twas a bright, sunny day, and the Blackbuck was out of the house...

It was another ride at the Camp on Saturday morning, but this time it was a group effort. The call went out to meet up at 8pm at the kiosk on the North unit, (which is the main site of the Boy Scout Camp). We gathered there and found four of us ready to ride: Captain Bob, The Deerslayer, Casey, and myself. (We gotta get you a cool nic-name, Casey!)

Anyway, Casey had already warmed up on the North units trails and was saying how much work needed to be done there yet. Yep! And we should all pitch in, (If you are local) because these trails are well worth the efforts!

I was riding the Blackbuck with the Willits W.O.W fork on it. The colors almost made me feel "punk rockish" with that sickly green hue, black, and pink accents. Too cool! We decided to ride over to the South unit, about two and a half miles, I suppose, and so we got our groove on in the sunny but coolish weather. 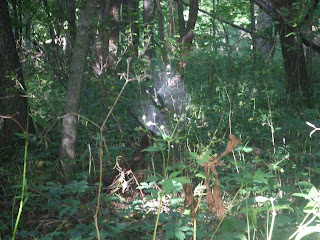 We got out there and took to the trails with a miss step through some nettles and other various itch weeds right off that bat. Well, now we have that out of the way at least........

It wasn't long before these local fast guys were working me hard. Of course, I did have the low gear of the bunch, and one of them had gears! Still, I gotta work on my climbing harder than they do because I'm such a tank. (A nice way of saying I'm fat. ha ha!) So it was that I often found myself bringing up the rear and that was okay. I got some time to look around and get some cool shots with the camera. 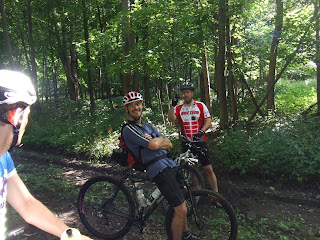 <===Captain Bob is shooting me shooting him. That's Casey in the middle and the Deerslayer on the left.

Captain Bob's "cuz", MTBidwell, was supposed to meet us out there, but he had run into trouble with his car and was going to be late. In the meantime, Casey had to depart for a company picnic, so we bid him adieu.

The three left of us went out on another loop. During that time, Captain's cell rang. It was MTBidwell saying that he had made it and was at the gate. We agreed to finish our loop and have him back track on it to meet up with us. When we did finally run across MTBidwell, he was bummed because his Blackberry jumped outta his shorts and landed somewhere on the trail.

We brainstormed an idea up. Captain Bob would continuously call MTBidwell's Blackberry and we would scatter up the trail that MTBidwell hd ridden listening for his ring tone, which was Radiohead's "Creep" So, we were running around doing this weird form of geo-cache' with our only clues coming from MTBidwell's directions. Finally, after about twenty minutes, the Deerslayer said, "I found it!" 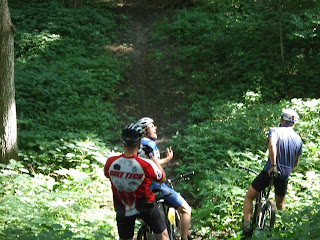 <=== The Deerslayer belting out an a capella version of Creep in the woods.

It was one of those, "you had to be there" moments that was a gut busting good time. (Hopefully Captain Bob gets his bit of video up from this!) Anyway, MTBidwell was relieved and we all had a good laugh. Onward through the trails for some more fun!

We made a couple more trips, moved some offending blow downs, discussed some trail refinements, and had a great ride. These trails on the south side are so flowy, fast, rooty, rocky in spots, and generally super fun that I can't stop going here. It's a great single speed trail system too. Casey and the guys sawed up a few offending trees that had blown over and now you can really rip through here. It's much more challenging to the ol' motor now! Well, at least my motor!

If you ever are in the area, you should hit these trails up. They are well worth the trouble.