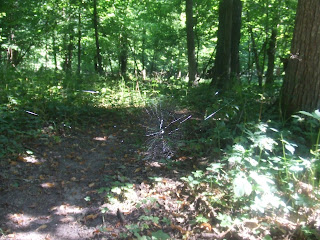 <===The bright patch of sunshine gave this spider's position away before I had its web plastered on my face!

The Wednesday ride at the Camp, (now becoming a regular thing), went very well this week. I was able to get in a good test session and the trails were primo. Dry and fast. The bonus was that with so many outings there under my belt, I was able to piece together the "Mystery of Captain Bob's Berm". Ahh.....a good day indeed! 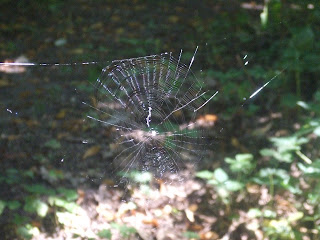 So I went and did a "regular loop" around the South side. This is the lap I took Mike Curiak around on Friday, as it's the loop I know best. Unfortunately, I knew there was much more trail there, but I didn't want to be fudging around trying to find my way while I had a guest. So today was the day to find out just what was going on out there. After my first lap was nearing completion, I saw a clue up near the Cope center. A glimmer of trail just off to my right not 15 yards away. I crossed the under brush here and set forth on my mission. It wasn't long before I found the berm and knew that I was on the right track. 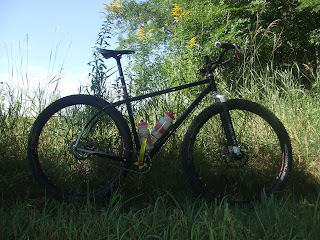 <=== The Blackbuck with the Origin 8 "short" carbon fork on. No.....I haven't cut the steer tube yet! This will end up on a different bike soon.

I followed the trail until it dumped me out onto some double track. I marked the entrance here so I wouldn't forget where it came out. Then I cruised to the right and found another trail leading in to the right. I followed this and confirmed my intuitions. It was Captain Bob's berm Trail all right! I continued on back to the marked spot I came out of before. This time I went left and it wasn't long before I found my "known" lap route. I followed this for a bit to see how I had been missing the turn into Captain Bob's Berm trail. 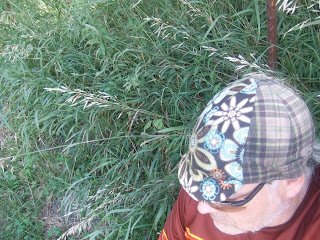 When I saw the marked entrance, I figured it out. I hadn't seen it before because it is sort of camouflaged by weeds. If you are not looking right at the entrance when you go by, you'll miss it. The next left was the one I always took, which leads you out and around the berm trail.

So, the mystery is a mystery no more. The berm trail is an inner loop to the outer loop and can only be accessed by the entrance and exit on the double track in the middle of everything. That's why it gets so confusing to new comers out there. You can easily get lost in going around in circles before you find the way out. But not me! Not anymore. I got it up here! (Pointing to my head) 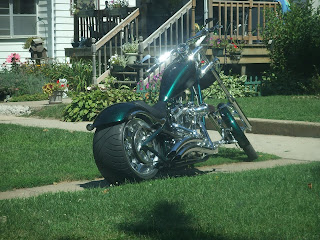 Yep! I can't get lost anymore, which in a way is sort of sad. Finding your way around a new trail system is fun. It's like playing "explorer" when you were a kid. Yeah, maybe you get lost and frustrated from time to time, but there is a certain spirit of adventure going in. Now I do have the satisfaction of solving the "mystery" of the trails out there, but I also lost something in the process.

Oh well, I guess I will still have fun out there as the trails are a blast to ride. Now it is time to tackle getting over those huge logs out there. That should be a challenge. Also, they are adding a bit here and there to the south unit, so I will still have a few explorations to accomplish. I can't wait until my next ride out there!
Posted by Guitar Ted at 5:27 AM