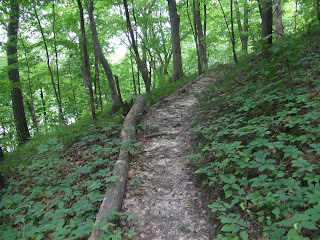 <=== A bit of traversing across a steep hill.

After some questions were answered by the members of the Ingawanis Mountain Bike Auxiliary, (Yes folks...IMBA. Just like the big guys!) I found out that I could ride the Camp's North unit. What they didn't tell me was that I was about to get slapped in the face by Nature. Literally! 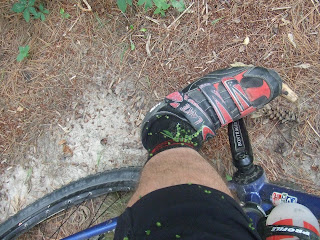 <=== Salsa socks were "peppered" with green!

The Camp's north unit has been out of commission since, well........last year! The spring we had brought record flooding, so no trail work had been done. By the time that cleared up, it was Boy Scout Jamboree, so nothing could be done then. I figure that I might just be the first guy to put a wheel to the trails out there all year so far.

It showed too. First of all, I want to say that I am not "bitching" or complaining. I'm just telling my story. I understand full well that the trails have not been cleared or maintained due to various circumstances beyond the IMBA's control. I was forewarned right before I rode by Ranger Tim, so I have no one to blame but myself for my little adventure. Okay, that said, I will say here that Nature gave me a hard time yesterday. 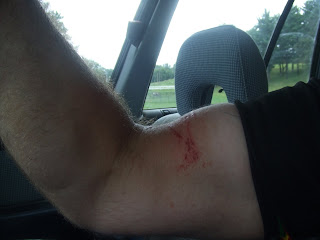 <=== Something to remember the ride by!

I had weed troubles, nasty weeds too. One that was full of spiny thorns that raked my bicep and bloodied me. Mostly though, it was just the nettles sticking to my socks and knickers. But the worst thing by far was the spider webs and spiders.

These webs were strung up between trees at about 20 yard intervals in some places. I'd be speeding along and thhwwwip! ( Yes, they literally sounded like that as the strands of the web would break off) I would get a web strewn across my face, chest, and arms. I would stop and glove off the sticky remainders and shake off the spider or it's wrapped up meals waiting for consumption and roll on..........to the next web! 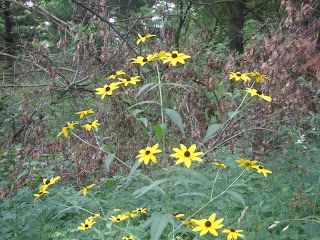 <=== Wildflowers are on the wane in Iowa, but I did see some nice ones on the North Side of the Camp.

The "Pines" area was the only respite from the spidery mess, so I toodled around there for a bit. As soon as I left the last pines behind me though, it was thhhwiiip! thhhhhwwwiiiip! Two within five feet of each other! Gah!


There were lots of blow downs, but not a lot on the trails, amazingly. Only in the low lying areas, where the flood waters had been, was it impassable. Lots of "log jams" and sand down there. It's terrible and will take many man hours to get fixed up. I wouldn't recommend even trying to take your bike down into that part of the North Unit. 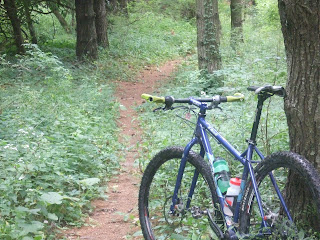 <=== The El Mariachi waiting to tackle another spider web.

Since I finally completed Captain Bob's Tomassini, which I traded him for the El Mariachi frame and fork, I felt a proper off road ride was in order for it. Man! I really like this bike for riding. The whole package of frame and fork are just the right deal. Steel feel, decent amount of "give" to the front fork without being noodly, and the geometry is neutral. Just right for woods riding. I have a medium sized frame and fork from an '07 complete El Mariachi, so it has the painted to match stem. Nice! It fits really well to my 6'1" frame. Thanks Captain Bob! Thanks Salsa! 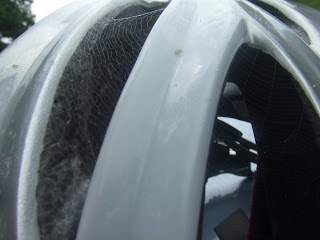 <=== Evidence of spider web collisions. Click on the pic to see detail!

So that was my ride on the North side. Almost two hours of plunking about. It would have been really not that bad if the spider webs weren't so thick and so prevalent. Some of those webs felt like 8 pound test fishing line! The Camp isn't that far off from being really rideable, save for the lower section, which in all honesty isn't the most thrilling part of the camp's North Unit anyway.

I did notice a lot more exposed rock. More exposed roots. It is far more rough than it ever was before. You wouldn't believe how much rougher the trails are, and they are much more technical too. I actually appreciate this fact. It makes for more of a challenge, so in that light, the bad weather and flooding brought a new level of difficulty to the North unit's trails.

No doubt there is work to be done. One thing, (I was totally amazed by this!) down in the section they call "Dean's Demise", there is a big downhill and back up again. Locals will remember exactly what I am talking about. Well, there is a full sized, mature dead tree suspended across the trail above your head at the lowest point of the downhill. It has to be 30-50 feet up in the air across the trail held on either end rather precariously by two other live mature trees. Weird! I have never seen anything like it. It probably isn't too safe either! Just one of the many things that will need addressing in the near future at the Camp. Hopefully I will be available to lend a hand when the time comes.