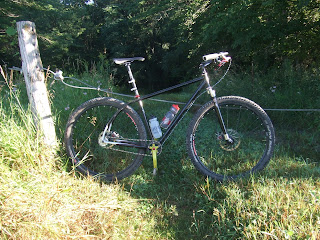 <===The Blackbuck with the Bontrager Race Lite Switchblade fork installed.

I made another trip up to the Camp's south side, the third in seven days, to hit up the excellent single track. If this trail doesn't get burned in, it won't be for my lack of efforts!

It had to be about the most perfect day for a mountain bike ride in a long, long time. Cool, but not cold, hardly any wind, and bright blue skies above a green canopy. The woods were super quiet, and I could hear deer walking through the twigs and underbrush whenever I stopped to listen. In fact, it didn't take long at all before I rustled a few up out of their cover. 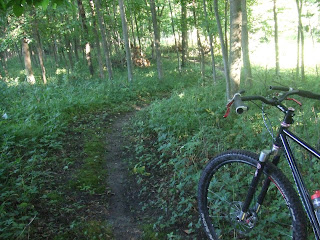 <=== The Blackbuck is waiting to gobble up some single track.

The trail was twisty and when I came around a corner, I saw two fawns, most likely twins, jump up and skitter down the trail in front of me. It wasn't long before they both made a hard right into the underbrush. I figured "mama" couldn't be far away, and I was right. She was leaping down the trail in front of me, trying to get me to chase her instead of the fawns. Nature at work, it's awesome!

Well, she was going my way, so I gave chase, but obviously, the doe outran me easily and doubled back through the underbrush to find her little ones. Oddly enough, the trail almost doubled back as well, and eventually I found their fresh tracks on the single track. 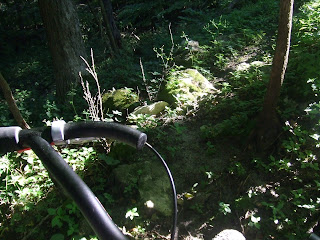 <=== Mossy, chunky limestone makes this right hander and steep up a toughy!

I actually found Captain Bob's Berm right away this time on the first lap through! Couldn't hardly believe that. I stopped several times to take photos and made a plan that the second time around would be as non-stop as possible. There are some blow downs that require a dismount.

I took almost an hour on the first go round. Moving a busted down tree and chasing a dead end trail took longer than it should have. I came out of the woods and stopped by the Dirty Blue Box to get the time for a timed lap. 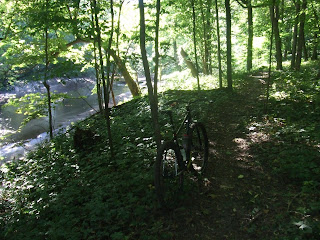 <=== One of my favorite spots on the trail. That's a stream off to the left glinting in the morning sun.

I headed out on lap number two to see if I could get around without any missteps. I did pretty well, except I somehow missed Captain Bob's Berm this time. What the......!!? I can't figure out how I miss that, but it is going to have to be something I figure out next time.

I made it around the rest of the loop in 17 minutes, which I thought was pretty dang good. I have no idea what the distance is out there, but I know I was haulin' pretty well. My legs felt snappy and I was more relaxed and fluid than I can remember being in a long, long time. It was really a great ride.

I can't wait to hit it up again real soon, but you locals will have to join me! Those trails are great, but they need to be burned in, and I can't do it alone!
Posted by Guitar Ted at 11:15 AM