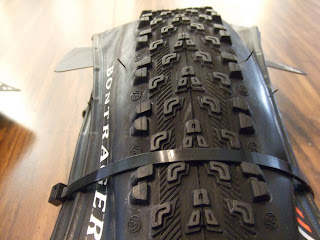 <===Tubeless at the expense of corpulence.

Somewhere out there, (Boone area) they are riding their bicycles in circles..... Ahh me! How I wish I would have made that gig! Oh well, it wasn't to be. As a good friend of mine says, "Things happen for a reason.." How true.

Got some more rubber in and mounted. Hmmm......I seem to remember these XR's as being bigger than this. Yeah, these are 2.0's at best, maybe a 2.1 after they stretch a bit. Disappointed in that fact, but they are tubeless ready and they do roll pretty well. I heard that Bontrager is going to revamp the entire tire line for 29"ers to reflect the idiosyncrasies of the bigger diameter. Good on them! Let's hope that volume makes a big comeback in the future. Of course, it wasn't all that long ago that Bontrager tires were so voluminous that they wouldn't fit in the rear of Fisher 29"er frames. Perhaps what I have here is the solution to that problem. Hrrrumpf!

Hrrrumpf! 2.0: Due to scheduling at the hospital where Mrs Guitar Ted works, I now find out that I am "Stay at home Dad" for the day on Monday instead of "Ride my bike Guitar Ted". Rats! I had great hopes of going somewhere out of the locality, but now if I am lucky, it'll be the Scout Camp again. Things could be far, far worse.

I did a re-con of the Green Belt. Not good! They blasted through the flotsam and jetsam from the spring floods with a crude blow. The city, strapped for cash as they are, (although my rising property tax bill says otherwise), decided to go through the Green Belt with an end loader. Yeah...........one of the big ones! Slash and burn like General Sherman, I tell ya. I don't even recognize some parts of the trail. Of course, the scouring of the bucket has obliterated whatever single track there was.

I suppose it was the most cost effective way to "get er duuun", but the trail is a complete disaster area and in some spots unrideable. After shock had turned to anger, I decided that if it is ever going to be anything to be worth riding again, it's going to take an effort from the locals to make it so. I don't know what that will look like, because honestly, there isn't much support for that area from cyclists, and I wouldn't be a bit surprised to see it get paved in the near future. In fact, now that I think about it, I'm sure it will. What a shame!

Anybody catch my famous Iowan reference in today's "post"? (That's another clue!)

Have a great weekend, ya'all!