I have been riding the Gates Carbon Center Track on the Fisher Collection Sawyer for a while now and here are my thoughts on the system. I think Gates has come a long, long way in regard to the functionality, but.....(.there's always a "but"), there are other concerns surrounding the system that give me pause. Some are surmountable, some perhaps not so much.

First off, the system works. I'll be perfectly clear. Gates has finally made a belt drive that you can use just like your chain system- no binding, and freer spin on the cranks, almost as good as a very worn in chain drive. The belt stays on the cogs, and there are no noises that don't belong. (Meaning no noise at all.)

Let's face it, the Sawyer is steel, and we all know that frame is twisting and flexing some. Not a lot, but the previous Carbon Drive belt I used, on an arguably much stouter steel frame, was not quiet, and did pop and squeal some times. It never ratcheted, but it wasn't dead quiet, and I had to have that belt "banjo string tight" to keep it tracking. Not so with the Center Track.

Had the Sawyer been equipped with the older belt, I don't think I would have given it a passing grade at all. Not with that frame, at any rate. That was a silly thing to my mind anyway. Why run a belt if it meant you had to have a very stiff, rough riding, over built frame so it wouldn't ratchet or derail? It just seemed stupid, really. Now Center Track seems to have relaxed those requirements to the point that if the frame did flex enough to give you issues, it probably would mean the frame is a poor choice for single speeding. 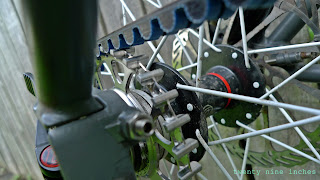 The new cogs are great. No more tearing up the bases of rear cogs and no goofy flanges to start making noise when things get wet/dirty. The stainless steel rear cog is a thing of CNC beauty, and the front ring, while rather bland looking, does its job perfectly.

That little fin in the middle is the magic to these. It keeps the belt from derailing, and allows for slight out of alignment conditions like when the frame twists slightly as you torque the pedals hard going up a climb. The belt itself is pretty amazing. Wider at 12mm, it is the widest belt Gates has offered for a bicycle, and it just works. I had a bit of tooth interfacing noise right out of the box, but it literally went away within the span of a couple of rides. Since then, I just periodically check the tension by pushing down on the belt, (admittedly, a no-tech way to do that!), but theoretically, the belt should never stretch, or need much of anything beyond a washing with water and a visual inspection from time to time.


So, it works. Then it is good to go, right? Not quite. There are a few things which are stumbling blocks that Gates may or may not get squared away with the Center Track. If they do, it could be the premier single speed drive train choice. It could, but.......

Cog Selection Is Too Narrow: Gates says they will offer a wide array of ratio choices at some point, but as of now, only the ratio I have is available. It was too tall to get me up some of the steeper inclines we have here, and it is way too stout of a gear for extended mountain climbing. At least on a 29"er it is. Admittedly, given time, this should get better. Just don't expect much for choice yet.

The system is very expensive. Even the previous incarnation of belt drive was/is expensive, and you can get two complete chain driven drive trains for the price of one Gates set up. Add in the fact that you will likely need a different belt and cog for different ratios, and it could get ugly on the pocketbook. Of course, the components are said to out last chains and traditional cogs/chain rings by a huge amount, but the upfront costs of getting into a Gates set up with multiple ratios would be staggering.

Tensioning is still a problem. Not everyone carries their iPhone on rides, or wants to. Then again, not all cyclists have iPhones. So that ap for "tuning" the belt tension, while clever, will not be of much use to many people. Folks that have bikes requiring re-tensioning every time they remove the rear wheel, or change ratios are going to have a hard time. Gates needs to come up with a repeatable, easy, mechanically measured means to tension their belts properly that can be carried easily on the bike. Engineers at Gates, "Go!" Let's see this get done and soon.

And You Still Need A Special Frame. After all, not all frames can be, or should be Gates compatible. So your favorite geometry, or brand may not be compatible. Chains can be fitted to any bicycle, Gates equipped or no.

Then you have to also consider the myriad ways that a chain can accommodate making almost any ratio work on any given bicycle, and even can make bicycles not meant to be single speeds into single speeds. Derailleurs? Yeah. One choice there!

With that said, I am still excited about a Gates Center Track set up. Why? Because of winter, more than anything. I would love to see a snow bike in my stable with an internally geared hub driven by a Gates Center Track belt. To me, that would be the ultimate winter set up for around here.

Thanks for getting R.E.M. in my head at 10:50 pm! I saw a Sawyer (through the window) at Mike's Bike Shop in Northfield this morning, wish I could have thrown a leg over it but they were not open yet. Rawland Tour a strong maybe this year. Later!

I'm thoroughly digging my Center Track belt set up. It is as smooth as smooth can be

I’ve been riding my custom “classic” belt drive system for 2 years now and love it.
Oh and Gates does make a mechanical belt tension tool that you can put in your pocket and wear on your finger called the Cricket.
http://www.amazon.com/Krikit-V-Belt-Tension-Gauge-91107/dp/B000AOEJOE

IMO, I wouldn’t trust any iPhone ap. to tension my belt.

@Danimal: I assume you also left a comment on Twenty Nine Inches, and if so, you know my thoughts, but for the benefit of anyone else that finds these comments....

The Krkit is, (to be kind), a cheesy tool. It is not all that accurate, and it is hard to read. Gates can, and should, do better for a system that commands a premier price and therefore has little room for miscues, which the Kriket clearly is.

Re tensioning ... you suggested that Gates needs to come up with a better system. You have it exactly backwards. Instead, companies should design their frames so that once the tension is set, the wheel can be removed without the need to reset the tension. Spot Brand Cycles and others have done this ... any company that builds a frame for a belt-drive bike should do the same.

Where oh where can I order the parts... any online sources? thx