Past, Present, And Future

The Past: I was going through some Facebook posts yesterday when I came upon a link that I found fascinating. It had a connection with last weekend's Gravel Worlds that were held in the Lincoln, Nebraska vicinity.

The fellas from War Axe Bikes wanted to help out with the Gravel Worlds this year, so they hatched a plan to host a "secret checkpoint" on the course. It turned out that the choice was an old limestone structure that was a pioneer home called the "Frederick Krull House".

The story behind the old limestone farm house is fascinating, and what I found ultimately inspiring was the dedication that the new owner, Matt Steinhausen, has for restoring this structure, and what is more, the history behind it.

You just don't see this sort of thing often enough in this country, and I think that preserving the history, and making it real by living in the house, (which is eventually the plan), is extraordinary. Click the link, but be prepared to read a bit! If you find rural, pioneer history and the efforts to preserve it interesting, it is a must read.

For me, it is just another reminder of the things you will see and learn about by gravel grinding. Getting "off the highway" and seeing the land, getting in touch with the people, and experiencing things from that perspective is just really refreshing, at least for myself. YMMV.

Finally, I found it really cool that the Pirate Cycling League guys and War Axe Bikes think to give these gravel events a bit of a historical and local flavor. I know that is something I always hope folks take away from Trans Iowa events. Cheers to the good guys and gals of Lincoln!

The Present: Yeasterday I went to Cedar Bend for my ride since we got dumped on by a good amount of rain on Monday. Things were really good there. 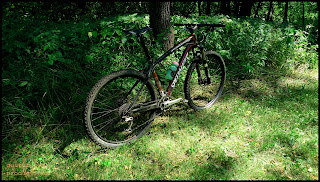 The Stumpjumper Expert Carbon rig I rode is one of my favorite bikes. I rode it about 4 laps there and it just rips around the corners, (with the proper amount of "body English"), and goes up climbs like crazy if you've got enough motor to do it.

I like testing wheels on this bike, because I know if I feel anything giving way, it isn't this frame! This thing doesn't flex much, if at all. Not that I notice anyway. The thing is, it doesn't "zing" you like aluminum does. Funny stuff, this carbon fiber, and I am surprised I have grown to like a carbon frame as much as I do this one.It's kind of ironic too, since I would characterize myself as being a "steel kinda guy" and having some "retro-grouchy" tendencies.

The Future: Which leads me into another interesting thought I came across from Dave Nice. He asked if carbon fiber frames will ever be thought of as "classic" in the same vein as steel frames from the early days of mountain biking.

Maybe, but only if they (a) survive, (b) are unique, and not a "catalog bike" from a Chinese distributor or carbon factory, and (c), have imparted some special ride quality that is noteworthy. Something that is "first", or "last", or "considered best" in carbon fiber might be a consideration as well.

So sure- Carbon frames of some sort will be revered for some reason down the road. I could see the early Fisher branded Superfly as being one of those bikes, or maybe even the Specialized I have now. Maybe.

The thing is, the market is so fickle, who knows? Maybe carbon frames will all somehow be disqualified for being too, well........plasticky.   If anyone did know, they would be stashing away whatever it is by now! I guess if I had to pick, I would say no. Carbon, unless it was something really revolutionary, is not going to be considered "classic" like a Willits, the Karate Monkey, (In Campstove Green!), or the first year of Fisher's Super Caliber 29"ers.

yeah, what i've read on the krull house is fascinating. i remember approaching it for the first time with some hesitation of being unwanted on the property. i'm glad there's been a human connection made. it's in a neat area, and it's right by the creek, something a modern house has no concern for (how it's sited)...

Great post; so true what you said about the cool things you will find out on the gravels. I will definitely check it out soo as I will be moving from Southern MN to Omaha in a few weeks.