Fat: It Isn't Just For Snow Anymore: I have been getting very inspired to ride my Mukluk recently, despite the clack, snap, and pop, of the dreaded hub. I have been dreaming of big adventures as I ride my Snow Dog to work and then back home again, trying to hit all the dirt and gravel bits I can along the way.
I first was getting stoked from this thread on mtbr.com called "Iceland Trip Report". The imagery is off the hook cool, and fat bikes are strewn throughout doing what they do best.

Another place I have been getting fat bike stoke is from GNAT on his blog here, and also now on the Salsa Cycles blog here. The recent trip to ride beaches along Alaskan coastline is another jaw droppingly great look at what fat bikes are capable of and where you can ride them.

First off, after you are done being amazed by the scenes in these trip recounts, I would submit to you that fat bikes are not "snow bikes". Sure, that's what they were originally intended to be, but they are capable all terrain bikes in their own right. I gotta say, I wish I had thought about it that way years ago now when I saw my first Pugsley. If you are holding back on getting one of these because you think, "I'll only use it in winter", you should re-think that position. Especially in light of the evidence. Fat bikes can do it all.

The Fastest Commuter Bike In The World (Really!)

You know, and I know that commuting by bicycle  is good stuff for people and the planet. I think anyone that buys this (gulp!) $5500.00 bike, and rides the bejeebees out of it, is awesome and should be cheered on.

But.......five plus G for a commuter bike? This isn't going to be a bike that gets "more butts on bikes" (Sorry QBP, but I'm borrowing that phrase for this post, okay?), but it is going to get some folks a bike that is "cool" and maybe will be added to the other rigs in the stable, or decorate some wealthy persons garage.

I don't know, but these exercises in style are okay, but let's get the folks not on bikes on bikes, ya know? The world doesn't need more "cool, uber-expensive commuter bikes". It needs cheap, reliable, long lasting, utilitarian bikes that will turn people on, not make them wave their hands in disgust at how stupidly expensive commuter bikes are.


Now For Something Good....

I know everyone's butt is different, but I gotta say this WTB Pure V saddle is the best perch for my behind I've yet tried. I could sit and ride on this thing all day long. It is ultra-comfy.

I recommend it for all day, cushy comfort that also doesn't get in the way when you mountain bike. The dropped nose doesn't snag, and the up-turned rear end is great for climbing longer grades. Or, you can skooch up on that padded nose for the steeps. Love Channel action takes the pressure off the nether regions for no numbness. I like feeling things.....uh, sorry! Back to saddles!

WTB also makes my second favorite saddle of all time, the classic SST. This is a better choice for mountain biking when you are in a hurry, or out of the saddle a lot, or both. Shorter rides are great with this one, but I've done all-day gravel grinders on one of my SST's, so they will cover a lot of riding.

As long as we're on the saddle kick, my Number 3 best is a Brooks B-17. Now, you could mountain bike with this, and some folks do, but I like mine on my single speed gravel grinder. Wow! Is it ever a comfortable saddle for long, rough road riding.

Okay, a while back I received these Ergon HA-2 Gloves with the HE-2's I looked at here. I gotta say it: These gloves are weird!

In fact, the gloves were so odd looking, with the shiny "Batman" rubber-like black trim and white rubber-like logo that I just decided I was not going to like these. I mean, they just looked like they would be waaay too hot, and I guess I failed to see how all that rubbery stuff was going to stay put on fabric that was going to stretch every which way from Sunday while I wore them on a bike.

In fact, I figured I'd send them off to my friend in California to try, but they were too small for him. Then the other day, my friend in SoCal and I were chatting about the gloves, and I remembered that I should still have them around. I figured, "Oh well! What the heck! I'll try them." 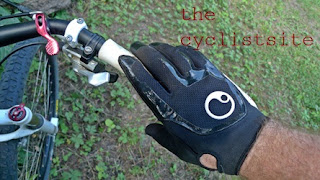 And you know what? They worked out just fine. Ergon says these are best used with the GA series of grips, and that's just what I used them with. Much of what I said about the HE-2's applies here. Tight, snug fit. Stretches a bit after a couple wearings, very tactile feel, and no nose wiper! What was different?

The wrist closure on this model is waaay better. It doesn't hardly come down onto your wrist, first of all, and the opening is biased so that it mates with the angle of your wrist/hand joint. Impressive and, well........ergonomic!

If you don't mind a "second skin" feeling in regards to gloves, hate bunching up, bad seams, or poor interface with your grips, you should check these out. I'll have to wring them out more before I pass final judgement, but these are interesting mittens, for sure. (Although the "super hero" look is not really growing on me!)

Okay folks! That's it for today. Get out and ride!
Posted by Guitar Ted at 1:00 AM

Regarding seats, those happen to be my favorites overall but not in any numerical order, they are all the best for the purposes I use them for. Also noteable are a Gamma from Fizik and a leather Spoon from Charge.

I'm lovin' this whole Fat Bike thing but still on the fence as to owning one. I mean I know they can do more than snow and I love to dream about what they can do and where but reality dictates that I don't have a job that allows me to go to Alaska and ride one, nor to Iceland and around here where I do live, there just aren't that many opportunities...I'm afraid it would land in my stable and collect dust. I'd buy one in a heartbeat if I lived where it could be used the way it should. I'll probably still buy one but it's pure luxury and I fear will be used for only a handful of rides. Marketing is a powerful thing though....

If you like the B17 for SS Gravel, I think you'd really like the Flyer for geared gravel. Why not SS? It gets a bit squeaky at high cadences.

@Wally: You need to hook up with Ben and Jason sometime and have them let you try one of theirs. You might have your mind changed then....

@Timothy: I have been eying a Swift for a geared set up, actually!

I agree with you on seats - I've been using a WTB Pure V on my commuter for a couple years now, and though I haven't done more than about 20 miles at a time on it, it's one of the comfiest seats I've ever used. I just don't think about it - and that's good!

I also have a B17 - on my Monocog - and like it, but am thinking about swapping it out for another WTB seat. I'm just not sure if it's the best fit for that bike.

I agree with Wally on the fat bike thing... I'd love to own one, but at the moment I'm still saving up for (probably) a Salsa El Mariachi. I commute through the winter (and use studded tires now) so a fat bike might get some use - but the rest of the time I don't really need tires any bigger than 2.4 or so.

Mark, I've been saying this about fat bikes since...well...ever. These things make dirt even MORE fun!

As for Fat Bikes, I'm still planning to ride Jason's Adventure Ride so I'll need to get something for that. No question they could hook me up with a ride and places to play - thats my point, around here I have no creek bottoms, mud, dunes or ocean beach. I have traffic, a few crowded trails and yeah some snow in winter. Using a Fat bike is like using my mountain bike - an exercise in loading and driving hours for a place to ride.

good luck tensioning the belt on that budnitz

Here's a nice antidote to the 5G commuter:

Wally-you need to move to MN and join us for gravel and fat bike rides. you'd love it here.

How could Budnitz get the country of origin wrong for at least 4 of the components?

@shiggy: It is about being trendy and fashionable, not accurate and "real". ;>)