This is Part II on the Guitar Ted Death Ride Invitational for 2011. Part 1 was posted on Monday, August 1st....

As we continued on from the devastation in Clutier, Iowa, we hit upon some gently rolling countryside. This was during a period of quite pleasant temperatures, and lowish humidity levels. It seemed odd, and several riders remarked at how pleasant it was. This, of course, wouldn't last, but more on that in a bit.

Of course, what would a ride be without a flat tire. So it was that Tim, "The Cookie Man", had called up that he had flatted. We decided to pull up the road to a place where there was some shade, and then Tim went to work on his Raleigh RX 1. Meanwhile, bemused locals passed us by twice- once each way- to make sure they would get the story right when they made their remarks over afternoon lite beerz.

Tim got his rig all up to snuff, and then we were off again. We passed the outskirts of Elberon, then we hit a stretch of flatter river bottom road. It was here that we came across Matt on the Surly. Matt had indicated to me on late Friday that he was planning on riding out of Ames over to meet us. He had said he would start riding the course backward until he met us starting at Toledo. Well, it was here, on the roads just south of Elberon, where we finally met up.

After this, we hit up on a long, snaking climb that would lead us to the "ridge road" that was to take us toward Toledo. For the most part, it stayed higher up, and missed all the valleys. This allowed for some spectacular views.

I kind of followed Matt on the Surly's lead here. He turned around, and caught on the pack of riders, and then pretty much blew by all of us, taking Doug with him. I didn't deter them, as I wanted to "up the pace" a bit to get some time back. I just felt we needed to get to Toledo before noon, and time was running short to get that done.


Well, it may have been a bit too much for the group. I felt a little bad after we stopped at the top of a big climb, the first in some miles, when I found out Adam and another Matt were missing. Stephen, who had toiled up slowly near the end of the group, called in for a ride right then and there.

We waited for Adam and Matt to show up for quite a while, but finally I had to tell Stephen to relay a message if he saw them that we were heading on to Toledo. We would barely make it by noon.

We got our grub on in Toledo and by this time it was evident that the heat was ratcheting up a few notches. Still, I was in good spirits and excited to see if we would find the zebra I saw on Wednesday when I was down that way for recon. It was getting around to that time when we were zipping up bags, stowing bottles, and strapping on helmets when I looked up and saw Matt's green All City sitting there. Whoa! Where did he come from?

I spoke to Matt, and he explained that he had peeled off to see how Adam was doing. They were together and had come down for the ride from Michigan. Well, Adam wasn't doing so hot. Cramps, dehydration, and fatigue were getting the best of him. He called in for a ride. Matt said he had come across Stephen waiting for his ride up the road, and that he had gotten the message that we were in Toledo.

So, we were down to 10 riders. We waited for Adam to scarf down a personal pizza and a drink, and we were off. This route out of town lead us to the shoulder of Highway 63 for a mile and a half. Well, there was some debris on that shoulder and it got Mike's Mukluk tire flat. I and a couple others were out front and missed this, so we had climbed up to the point where the zebra had been spotted, and then pulled up to wait. Well, there wasn't one zebra.........there were five!

Well, while we were waiting for the flat tire to be repaired on Mike's Mukluk, it was obvious that the temperature was soaring well into the upper 90's and the humidity level wasn't crazy, but it was up there as well. I was starting to feel it in a negative way, and we had some big, mean climbs coming up, including the zig-zag B Road I reconned just the previous Wednesday. By the time I got through that section, I was very nearly the last rider in to the cover of some shade, where I plopped myself down near a flower bed. It was pretty bad from that point for me.

I was pretty much in survival mode for the next 25 miles. Fortunately, after the B Road, things flattened out for about 8 miles and I could put in a lower, steady effort. Ken was supportive to me at this time, falling back a couple of times to ask how I was doing. I was just way too hot.

The route then turned and entered the "Wolf Creek Walls" section I put in Trans Iowa V7's course this year. Brutal! In the midst of this section, I came up on the riders waiting for me again under a grove of trees, where I again just threw myself on the ground and rested as fast and hard as I could. At about this time, a discussion arose amongst the riders as to where a certain county park was I had mentioned that we could get water at. Matt on the Surly pointed out that we were not scheduled to go by this, as I had thought previously. (I had forgotten I changed up that part of the route) So, I called a vote. All in favor? The vote was unanimous! (Not surprisingly!) We would stop for water, and it was well received news. Many were getting low on supply.

Unfortunately, Matt on the All City was up the road. Waaaay up the road! No one had seen him for a bit. Uh oh! Guess he was doing the route as planned. Hopefully he didn't wait around for us, or end up without water!

Unusual blasts of cooler air were being felt from time to time now in the southerly cross winds by the riders. It was odd, but strangely refreshing when these would hit you. Hitting a patch of road shadowed by a cloud was worth what seemed like 10 degrees less heat. I don't know, but maybe I was overly sensitive to these things in my state of condition at that time. However; others remarked later they had felt it too.

This all came to a much appreciated end when we reached T.F. Clark County Park on Wolf Creek. There we found a sharp draught of water to cool our bones and innards. It was fantastic! It fairly revived me to the point where I could make my tired old legs go roundy-round for the last 8 miles of the route. What could happen in 8 miles anyway?

We came upon a sign at the crossing of two gravel roads that said "Bridge Out Ahead" . We all stopped, and some dazed and confused minds tried to debate on what was to be done. As ride leader, I was just chuckling to myself, and thinking we should go and see what we would see, but I felt it wasn't going to go that way. Some riders were leaning towards hitting the pavement two miles to our east, and then going northwards two and a half miles to the camp. I didn't like the sounds of that, and apparently, Jeremy didn't either. He grew frustrated with the indecision, and announced he was going on. I saw everyone clip in to follow him, and smiled. I like the way that guy thinks! In the end, it turned out to be no big deal.

So it was that we labored up the final hills towards Hickory Hills access road, and cruised in for the finish. Riders recorded anywhere from 99 plus to just over 100 miles on their respective GPS units, so I figured it at 100 miles. Matt on the All City even finished the route, (as it was planned), and got right at 100 miles as well. How'd he fare? Just fine. He said an elderly farm couple took him in and set him up with some much needed water.

Several riders took their leave immediately, but Scott, Ken, Matt on the Surly, and Courtney and I sat around, had a beer, and chatted. Tim distributed his homemade cookies he did just for the event, and we all pronounced them quite edible. Then we each wandered off to get cleaned up, and most went on their respective ways home.

Matt on the Surly and I went out to "The Door", Iowa, and got some pizza. Then he crashed in his hammock, and I in my tent. The next day, Matt got up early to peddle home, and I broke camp the way I set it up. All on my own. 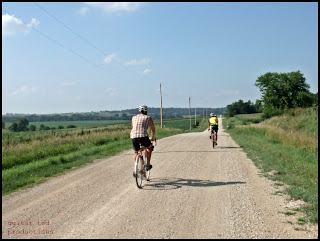 It was a really great GTDRI this year. I don't know if I've ever had this many riders before, or a course that combined all the traits of Iowa gravel so well into one big dusty mess. As always, I thank each and everyone that came out for a little bit, or all of this ride. I am humbled beyond belief that you come, and even more that you had fun doing this goofy gravel gig.

So many great miles of gravel, thanks for sharing some of it with us! Had a great time.

Great write up! I had a blast and got to ride some new gravel with some great guys.

Thanks for the great ride and group spirit. The detour to the park for water was a life saver for me. I also appreciate the kindness and concern that was provided to me during the heat of the day. Next year, I'll try out some new cookie recipies!