Trans Iowa V8 Registration: The big news around here today is Trans Iowa V8 registration which opens for Rookies and Veterans, and which closes for Finishers.

The cards, express mail packages, and drop-offs will be something to behold as folks scramble to insure themselves that they can lay claim to one of the 79 roster spots left over, (so far), which are split in between Veterans and Rookies evenly.

My gut feeling is that the Rookie class will fill up much more quickly than it did last year. Then it took the entire week to go to the maximum but as you may recall, there were more spots to fill for the Rookies. The Veterans got to choose first and only took 29 spots out of an available 40. The eleven leftovers were added to the 40 for the Rookies and that totaled 51 spots.

This year the Registration runs together on the same week. The Veterans may not fill their quota, or they might, but the (now) 39 spots going to Rookies will go well before the week is out. After the week is up, I'll see what the Veterans have claimed, and if there are any leftovers, a few Rookies might sneak in. Stay tuned.... 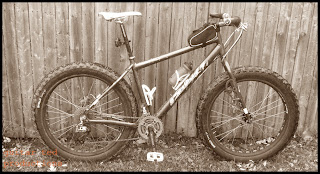 I am going to transform the Snow Dog from "summer set up" to "winter set up". This will include pulling the older Bontrager triple crank off, and replacing the tires and tubes.

The replacement crank will be an Origin 8 Sub Compact 29 crank. This crank is special for its 2X set up which places the bolt pattern for the granny gear ring more towards the outside, and the outer ring is a standard 104BCD which I am bolting a 32T Salsa ring to. The inner ring will be a 22T. The offset rings to the outside should gain me some clearance when I place the chain in the granny and in the lowest gear out back. The reason for doing that will be necessary due to the tire swap.

I have a set of 4.5" Big Fat Larrys to go on here along with the Surly "Lite" fat bike tubes to go inside them. These tires will be wider than the old Larry 3.8"ers and I have barely enough chain to tire clearance as it is in the lowest of gears. The combination of the Origin 8 crank and leaving off a couple of the highest gears on the cassette should prove to be plenty good in terms of drive train clearance. The wider tires will get me that "extra little bit" of float to get me through the trail fluff.

There will be other tweaks involving water bottle cages, bags, and lights, but I'll detail those gear swaps and additions later. All in a quest to get the right set up not only for this winter, but for Triple D in particular. 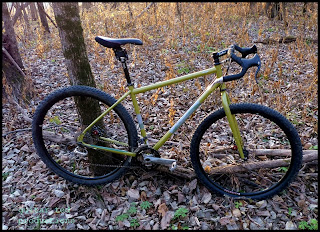 I was chatting with Ben Witt on the phone the other day and he was asking me again about what I thought about the Fargo Gen II.

I told him he was right: The bike is waaay better than the old Fargo, well.......at least off road it is. I still think Fargo Gen I has its place, but for pure, fast single track action, this version has it all over the old one. I love the way this bike handles off road.

I was also discussing some suspension fork choices and interestingly, Ben says they have had success with 100mm forks on these. He claims that setting up the fork with maximum recommended sag works fine with the 100mm of travel. (Note: Salsa recommends 80mm forks here.)

I will be tracking down a fork for this in the future for squish duties.

Okay folks, that's it. I'll be busy with T.I.V8 registration for a lot of the day today. Look for an update tomorrow! Have a great weekend, and ride a bicycle if ya can!
Posted by Guitar Ted at 1:30 AM

wish i was there to behold the madness. pictures?

@mw: Good suggestion! I'll have the camera at the ready for anything of interest. Thanks!

Envy aside, I love reading your comments about the gen1 vs gen2 Fargo. Has your experience with the differences between these rigs changed your impression of your other drop-bar MTB, the Gryphon?

Guitar Ted,
I need some assistance; you may be able to help. I am in the army and I like to commute by bike, which sucks because I have boots and uniforms that get heavy. I don’t have a touring bike so I have always packed it on my back. This year I moved to Davenport and it has the worst roads ever, I would prefer gravel over the seams in the concrete roads. I had been thinking about the Fargo but then Surly announced the Ogre.

Of course there is no information for the Ogre that is very detailed. Based on my comparison it is a Karate Monkey with braze-on rack capabilities and cantilever posts.

My intended use is commuting, gravel grinding, and the occasional single track (there are some decent spots I can go during lunch).

How does this compare to the Fargo?
Thanks for your time

@Hook: Sorry! I meant to get to your comment. The Gryphon is a better single speeder, of course, but otherwise I like the new Fargo and Gryphon equally as well. (Maybe I miss the capability of having a sus fork on the Gryphon though. That's the only downside I see)

@Irishtsunami: I think that the Ogre would be an excellent choice for your needs. Very, very versatile bike. All the things you want to do are totally within the Ogre's range of capabilities.

The Fargo is a bit lighter, higher in the front end, and also could handle most of what you want here, but loses the single speed capabilities, and poses problems with fenders and some other commuter friendly things.

I think the Ogre is a great choice though. Kind of a "Swiss Army knife" deal.