Yes.......the dreaded, self examination at years end!  Oh the horror! Well, this year I am going to just muse on a few things that I felt were significant to me that others might possibly be able to relate to.

That's right- no month-by-month recounting of crap you don't care about!

Today, I am going to spout off about fat bikes. The whole fat bike thing has always intrigued me and while I thought they would be fun, I never knew how fun they really would/could be until I finally got mine last January.

I was riding in weather I never would have rode in before, and I was loving every minute of it. Fat bikes made winter fun again. Then there was that dratted Phil Wood hub.......meh! That squandered a lot of my potential riding in winter. Thanks to Ben Witt,  I got a lot more rides in on snow than I would have otherwise.

Finally though, I had to give his wheel back, and I was snow-bike-less until August. Then the whole Phil thing fell apart and I went with Salsa Cycles hubs, which have been great, and I found out fat bikes do great on lots of things besides snow. It has been a ton of fun, and to let you know how much fun it has been, I went all in on another fat bike, (the titanium Mukluk), and I hope to ride fat bikes a whole lot more in 2012. 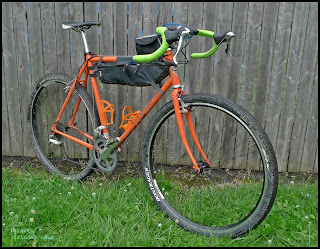 And as long as I am talking about bicycles.....let's not forget the other one I got this past year that has been just awesome for me- The Black Mountain Cycles "Monstercross", (but I call mine "Orange Crush") which was used extensively throughout the year.

This one got me home on the Renegade Gents Race, the Guitar Ted Death Ride Invitational, and countless gravel adventures and commutes.

In fact, this coming year, I plan on using this bike more, and it will get a few upgrades along the way. I will get a new Chris King head set and bottom bracket in this. Maybe a couple more finer details, like TRP brakes, then it should be done.

I do have to say that I may not be the biggest fan of compact doubles though. Not on gravel, anyway. I think I need a cyclocross ring set up, and that may happen here soon.

So, these two bikes were a big, big deal for me this year. I had a ton of fun on both of them, and I am still stoked that both of these are still in my stable. There are other bikes I got that are awesome as well. Like the new Fargo Gen II, but not any others that have stoked the ride fire like the Mukluk and the Orange Crush.

I'll be back tomorrow with some more Guitar Ted Productions Rear View.
Posted by Guitar Ted at 1:30 AM

Firstly,I hope yours and you had an awesome Christmas,GT,and a great New Years coming!

I suppose I'd have to actually ride a fatbike for myself-I've never actually-but while I'm always interested to read about em,I have so far had little desire to buy and ride one...though I have enjoyed riding them vicariously through your posts :)


I'm still LOVING the Orange Crush,looking forward to reading more about it in the coming year. Good read,my friend,whet my appetite for what's coming :)

Hey GT,
Your orange crush looks rad, makes me want a similar bike! But it also makes me wonder, how many bikes do you have? Have you ever done a round up post on all your bikes?

Guitar Ted said...
This comment has been removed by the author.
5:01 PM

@Miles: I've never done an overview of my bikes. That just seems a bit pretentious and ....well, not right- to my mind.