The good folks at Lezyne sent over this new Super Drive LED light to be reviewed on The Cyclistsite. It is one of three models Lezyne is introducing for 2012.

I thought I would give everyone a sneak peek at this much anticipated light.

The Lezyne lights have been teased since Interbike and were strongly rumored before then, but details were somewhat scarce. The line up includes this top of the line Super Drive, the Power Drive, and the Mini Drive.

The range has some zap to it power-wise too. The top end Super Drive sports 450 lumens, the Power Drive has 300 lumens and the Mini Drive has a high power of 150 lumens. All are self contained units. No separate battery packs here. My first impression upon looking at the Super Drive was, "Man! That thing isn't very big."

It is about the size of a Mag Lite Mini, if you are familiar with those older Halogen bulbed flashlights. It is light in weight, and the model I have here is anodized in a nice pewter hue. 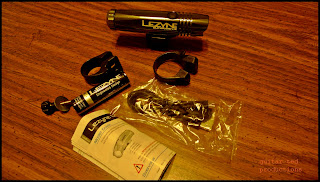 The package contains everything you need to get up and rolling. There are two mounts to match up with 25.4mm or 31.8mm bars, a thumbscrew to fasten the clamps, the proprietary battery, torch body/lens with mounting base, the USB charger cord, and the instructions.

The torch has a rear cover that unscrews to allow access to the inner cavity where the battery resides. Install the battery, hook up the USB cord to the covered port at the base of the torch body, and plug it into your powered USB port on your computer, or USB power wall wart. The instructions claim a four hour charge time, but my example was charged fully in just over three hours out of the box.

Interestingly, the light is made to flash softly as it charges. When it stops, the light is fully charged. If you want an assurance that it is done charging, the instructions say unplug the USB cord, then plug back in, and the light should flash once, indicating a full charge. My example didn't do this right off. I un-plugged and plugged back in three times before I got the "one flash then off" signal. 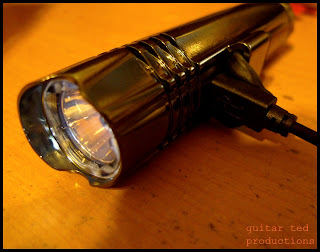 Once charged up, you can expect the following run times:
To turn on the unit, hold down the button on the top of the torch for 1.5 seconds. It illuminates at high power first. Hit the button again to tab down to Medium, and so on through to Flash mode, and then it will cycle around back to High. To power down, hold the button down for 1.5 seconds.

The light indicates low power by kicking down to the Low mode and flashing occasionally indicating approximately 15 minutes of reserve battery power. Additionally, you can re-charge from any point in the discharge of the battery without affecting the run times according to Lezyne. Leaving the battery plugged into the USB charge cable and a computer/power source after a complete charge also is not detrimental to the unit.

The light mounted up to my bars easily, and it has a swivel which allows for a few degrees of tilt side to side to adjust the beam as you like it. Of course, up and down is adjusted simply by twisting the bar mount on the bars. Sadly, there is no helmet mount included.  The Lezyne Super Drive MSRP is $109.00.

I haven't had a chance to ride this with this light yet, but my impressions are that if it can live up to its claims it will be a great little light. I'll have more to say soon after I get some rides in on it.

Note: Lezyne sent this light over to be reviewed on The Cyclistsite at no charge. They did not bribe me nor pay me for this post, and I will strive to give my honest opinions and thoughts throughout.
Posted by Guitar Ted at 1:30 AM

If you were to buy a light today, say for commuting and light off road use, what would you buy?

I use a similar light (from dealextreme.com). Mine gives 2.5hrs on high. The trick is to carry one or two charged spare batteries (I guess this one uses 18650's?). That way you have guaranteed light for those loooong nights.

@james: I have always wanted to see something like this Lezyne come out: A self contained unit with some lighting punch that has great optics and light throw down the road/trail. Is the Lezyne there? I don't know just yet.

My only concerns with hub dynamo lighting is that you have a proprietary system dedicated to one bike. LED lights like the Lezyne are portable and more versatile. Most of these types of lights have left me wanting though, so there is that side to consider. They haven't wowed me with power outputs, optics, or run times.

I've been really please with the Magicshine 900 lumen lights from Geoman Gear. They had a battery recall initially, but the new batteries have resolved the issue. The $/lumen ratio is amazing - burn times are about 6/4/2 hours. I've had numerous cars halt pulling out because they thought I was a motorcycle. We've got about 9 sets running between MTB buddies.

Of course, led lights are most popular for the fact that they are low cost, low maintenance, and low energy.

I have to say... I have a couple of Niterider's Cordless series of LED lights -- one of the 250 lumen models from last year, and a new 600 lumen model from the 2012 catalog, and they're both impressive lights. In particular, the 600, when mounted on a helmet, is capable of lighting the way down some fast, technical off-road descents. I actually rode a crazy descent in Colorado with guys who knew the trail much better than I at night with just such a setup. While I would have preferred more light, I forgot the light head for my Pro 750 I brought for my handlebar, so I had to single light it that night.

I would never have tried that with a generator... but then, that was far from "light" off-road use.

@GuitarTed: Just got the Super Drive and I have to say I'm very impressed. Although it's only listed as 450 lumens it seems as bright or brighter than the 600 lumen NiteRider I briefly owned. Huge bonus to the Lezyne line is the ability to change batteries. BIG kudos to Lezyne for using a standard size available at Radio Shack. RE Dyno Lights - I have a Supernova E3 Pro and a Shimano Alfine hub. For city riding, or even very long commutes, they're awesome - always available power that won't run out and does not need to be charged. Good hubs (e.g. Alfine/Schmidt) produce very low drag, BUT, and this is kinda big, they're all heavy. It's not always and issue but sometimes it is. I'd also hesitate to use a dyno hub on a mtb with anything but mellow buffed out trails. TI? probably fine. Vapor Trail? I'd pass. Light output is generally good, but they're generally excellent "commuter" level output, but not necessarily trail worthy. The exception that I know of is the Supernova E3 triple, but then you have a dedicated dyno hub light that is a bit too bright for oncomming traffic. Neither the Triple nor any other dyno light that I know of have an adjustable strength as many battery powered lights do. Horses for courses I suppose.