So we have a horse race between the Veterans and the Rookies. They both sent in about 20 entries each for the next running of Trans Iowa. The Finishers surprised me by taking in 22 spots off the top.

Well, I still think that the Rookies will fill their class out first, but we'll see.

The day of Registration opening, (with post cards), is always a treat for the folks at the shop. They were all standing at the door at 9am when the store opens to see what the guy in the van would bring in. Well, it was these lovely flowers and the plant that you can see right here.

Then there was the massive drop off by Fed Ex and then later it was UPS. All told I figured about a dozen or more sent in cards over night express. The U.S.P.S. came with about 16 cards, and e-mail found another Finisher to add to the list. We even got a few cards driven up and delivered in person.

One lonely card was left under the door too. And that was all the hoopla for the day. 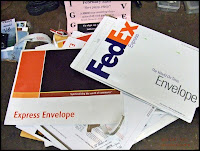 So now we have about 39 spots left to go between the two classes. Finishers are done. I suspect we'll see the event fill out to the 100 roster limit, but it may take a few days into next week to get it there.

Interesting note; Lots of Rookies are coming in as single speeders. Read into that what you will.

Other than this, I think the field is well rounded with seasoned Trans Iowa veterans, finishers, and new blood in the Rookie Class. Finishers from almost every version of Trans Iowa are in the roster for T.I.V8 and one Veteran, Jim McGuire, continues his streak of being in every Trans Iowa that has been run. Other unexpected returning folk were noted as well. It looks like it will be a fun reunion, at the very least.

My gut feeling is that the "curse" of bad weather on even numbered years is going to be ended. I just think this time the weather is going to be great. I'm excited about this one, (at least for now!), and I am looking forward to seeing everyone in Grinnell come April.
Posted by Guitar Ted at 1:21 AM

G.T.-I'd love to see your wonderful state and the people of Grinnell again this year, but we're expecting our third and it's not in the cards this year. If you do a ninth version I'll try to make it back.