Continuing on with the remembrances from the last year that impressed me, we move on to the end of 2011... 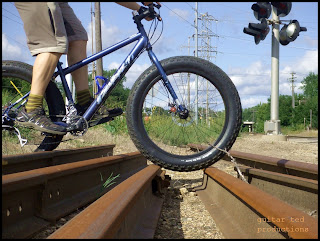 Northfield Trip #2: Labor Day weekend was another time I had a blast up in Northfield, Minnesota with Ben Witt and his lovely wife. Mrs. Guitar Ted and Ben's wife like to shop, which left Ben, Curtis, and I all day to goof off on fat bikes, and we literally did take the whole day to do just that.

In the morning I built up my new Salsa Cycles hubs to my Rolling Darryls, replacing the bad hubs I had before. It didn't take me long to find out that the Salsa hubs were vastly superior, since we were doing stunts over rocks, down cement stair cases, and up and over twisty single track right outta the box.

We did urban stuff, we did single track in the woods, we did gravel roads, and bicycle paths. We ended the day by cruising a cemetery and a few dark, dim single track trails before it was just too dark to see. It was the perfect cap off to a sultry, hot summer of riding.

I learned a few things about fat bikes that day as well. I learned that they can do a lot more than you think, (snow), and are grin inducing, fun machines. In fact, it is largely due to this experience that I now cringe when I hear people refer to these bikes as "snow bikes".  That's selling them way too short.

Interbike: Of course, I went out to Interbike again. Last year I thought it would be my last time in Las Vegas, since Interbike had planned to move to Anaheim, California, but noooooo!

So, we found ourselves in the desert where.....it rained! That was a new experience, and the weather seemed to have the same subdued feel to the desert that the lack of attendance at Interbike had on the show.

There was a weird, almost lackadaisical feel to the show, which was totally different from the near hyper-activity level I normally experience here. I was completely okay with this, but it definitely wasn't the same as in years past. People had more time to talk, to actually relate to you. It was a nice change, but I don't think the folks running the show could have been very happy with the overall attendance numbers.

Interbike also marked the end of Summer for Iowa. By the time I got back, I could feel Fall had settled over the land, and I was going to be super busy doing testing for Twenty Nine Inches.

Trans Iowa V8: So, along with all the bicycle riding I was doing, I had to get Trans Iowa up and chugging along again. The Registration happened, and the roster filled up, while in the meantime, I was lining up stuff in Grinnell.

I also had to get the route planned, and to actually lay eyes to it. This will be the first time in a long time that I will be the one laying eyes to the entire course. I haven't had to do that for awhile.

So, fall progressed into what should have been winter, and no snow, with above average temperatures. Trying to get ready for riding next year hasn't been an issue, and Trans Iowa preparations have not been hindered. Trouble is, in December I always have the big birthdays, Christmas, and then my anniversary right after New Years. Added to that is all the other social gatherings, and Holiday time isn't the best for recon. But then again.....who would have guessed that I could do recon at all now?!.

So there are my highlights from 2011. It has been quite a year full of goings on, great people, and some bummers along the way. But for the most part, it was a great year. Awesome really. I hope yours was just as fun filled and action packed.