A Good Day On A Bicycle

I had determined in my mind that a few things had come together which were all pointing in the direction of a big gravel ride for Saturday. First- I was healthy again. No niggling cold issues, no fatigue, and no flu-like symptoms. I hadn't felt "right" the entire month of February, and the first week of March was really when I finally started to get on with commuting to work by bicycle on a regular basis again. So, the body was responding again in a way that told me it was time for a ride.

Secondly, I had just received a few items to test, one of which is a dedicated gravel road tire called the Almanzo Open 30. I got the tires mounted up on Friday and that was another reason to go out and ride some good gravel miles. But a big reason for getting going was that in less than a month I have a metric century gravel road event in the Renegade Gents Race coming up. I need to get the motor tuned up again, and in a hurry too!

Saturday was not starting out the best in terms of the weather. It was grey, slightly foggy, and cold. I could hear a stiff wind buffeting the house. It would have been easier to stay inside and blame the weather, but that wasn't going to get me where I needed to be. 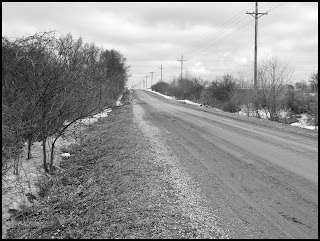 So I kitted up, and hoped that my feet would stay warm. The wind was out of the North-Northeast, so I decided I was going to head out in those directions to start out with. After several miles to get out of town, I finally made contact with gravel and I was out in the countryside once again. It had been awhile since I had been on gravel.

Well, saying it was gravel is not all that correct. More like dirt, mud, and a bit of rock here and there to start out with. The Almanzo tires, which come out to be about 31mm wide, were not very friendly with the Spring conditions. The roads were soft, and in places, just deep and muddy. The tires were doing the "pizza cutter" and you could easily tell just where the road way was soft by how it felt at the pedals. It was almost like someone was applying your brakes. Then there was the wind...

The first leg went mostly East, but when I finally found a Northward road that wasn't a dead end or a blacktop, I found out that the headwind was a killer. Matched up with the soft roads, I had a heck of a workout going. I was stuck going north for several miles as well, having to pass up a few opportunities that were either blacktop, or were going to turn into blacktop.

Once I turned back West I looked at my phone for the time. Wow! I had been out an hour and a half already. This could turn into a much longer ride than I had planned for, since I was thinking that knocking off two hours would be really pushing things for getting back to training. Oh well! I was here, and I had a bicycle. I was going to have to get myself back home.

I came across a Road Closed sign, but I wasn't too worried. I figured it was just due to soft roads, or some minor construction, perhaps. When I saw a field South of me full of flood water, I became a bit more concerned. "Hmm....I may be turning back the way I came after all", I thought. The road started to look really rutted out ahead of me, and in fact, I found myself in such a deep rut that the side of the rut kicked my foot out of my pedal! Not to mention that the dirt was so soft I felt like I was going up a steep hill, when in fact I was going downhill!

I came up on the reason why the road had been closed, and it turned out to be an ice jam on a small creek. It must have backed up the water enough that the creek overflowed into the ditch and that filled up enough that the water rushed across the road, tearing out some three foot ruts and large sectors of the gravel.

Of course, on a bicycle it was no big deal. I went right on by and onward to the West. There some dogs along this stretch of road, but it was so windy and blustery they wouldn't even chase me, preferring rather to stay out of the raw Northerly blast.  Even though I was taking the wind at my side, it was a struggle combined with the very soft, sponge cake-like road.  I was growing rather tired of this. I was certainly looking for my South road, and it didn't come too soon for me.

Although the road surface didn't get any harder, the speeds went way up through the Southward miles. The mighty wind at my back and some decent sized rollers made sure of this. I was making up a lot of time on this stretch and the wind blew me all the way back into town easily. Then it was just a cruise on pavement a few miles back to the house where I walked into my door at precisely three hours of ride time. I had felt pretty good the entire time, but I knew I had pushed the legs pretty hard.

I found out later just how hard, as the aches and tireds which were the result of the effort set in. But it was a good day out on the bike. One that was much needed and appreciated.
Posted by Guitar Ted at 1:30 AM