Well, the pity-party I was having about the weather wasn't going to fix what ailed me. No- I needed the good medicine- a real bicycle ride to clear the mind and soul. So that's just what I did yesterday and I did it on By-Tor the Titanium Mukluk.

It was darn cold in the morning, I think something like 7°F- but the sun was out and that brutal wind we've had for three days was gone as well. Good riddance too! This time of year, if the sun is out, 25°F feels a lot warmer than it does in January. That was the forecast for the afternoon too. Warmer with no wind. I waited till after lunch then to go out.

I headed over to the Green Belt, and I didn't know what I would find there. Snow? Ice? Flooding from the recent ice jam? Well, it turned out to be mostly everything but with the exception of the flooding. That had gone away, thankfully. In fact, it is surprising to see how far down the creek has gone already.

The air felt great though, compared to the previous days of Arctic blasting, and I was enjoying the bright sunshine as I trundled through very nicely packed tracts of snow punctuated with stretches of wet, muddy grounds. The Larry 3.8"ers were slipping a bit- Nates would be nice about now- but I wasn't going to quibble. I was out riding a bicycle, and that was what was important right then.

The first leg came to a halt when I ran out of ground and into sheet ice from the flooding. The trail there is slightly lensed out from the years of use and it provides a perfect course for the flood waters to gather when the Black Hawk decides to have a walk about outside its boundaries. I stopped here and picked off a few images. It was deadly silent in this place with the exception of the occasional crashing of ice sheets falling away from tree trunks.

The Sun was doing Her work out there, and slowly but surely the patches of snow and ice were melting, despite the below freezing temperatures. I ran across some unfrozen stretches of mud which lay over frozen earth below it and that was some super slickery stuff right there! I am not even sure Nates with there knobbly tread would have done anything better than what I had in those conditions.

I turned back and climbed the dike, rode up on top of that until I came to the spot where there is a passage across a small drainage creek to the lake on the other side. I wanted to ride around the lake if I could. However; the creek ice was far too thin to trust, so I back tracked yet again to the dike and went around the long way. 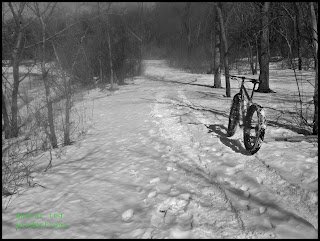 Once I got over to the entrance to the lake loop I found nicely packed sections of snow that was decently fast to ride on. There were a few slippery spots of mud where the snow had been roached off by the ever strengthening Sun, but this section was a lot of fun on the fat bike.

There were a few places where there was sand as well, which was pretty frozen up and firm yet. Sand doesn't seem to thaw as quickly as black dirt does. It is a good thing that the dirt does unfreeze as fast as it does as the robins are back, and they were concentrated on any sections of bare earth they could find.

Then I decided to head back to the shed and that was via the bike path. I hit up every stretch of frozen snow I could, since this will disappear quickly with the forecast warmth to come. I wanted at least one ride on snow that was something other than crawling or post holing/walking. The Green Belt may have been choked off by ice, but I still got a much needed shot of riding medicine yesterday with more to come.
Posted by Guitar Ted at 8:03 AM