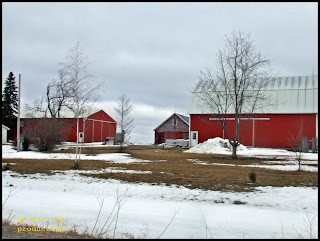 I went out for a 3 hour gravel ride and shot a bunch of barns which I usually post for my buddy Jason. This year we decided that we could only post up images of barns if we went to see them by bicycle. So I guess these qualify. 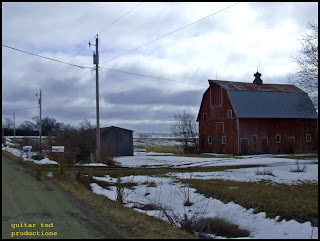 The lighting was odd most of the day with the mostly overcast sky. It was terribly windy out of the north as well, so I had to be choosy about whether I would take the chance to shoot a barn or not. 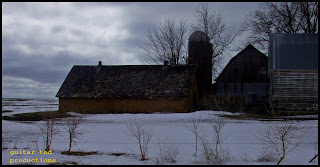 I headed out North and East of Waterloo. It seems that there still are a plethora of small farms out this way. That is getting to be very unusual these days. It makes finding barns hard when the farms have disappeared, for the most part, and are miles apart in some areas now.

The snow hasn't given over completely yet. There were even some stretches where drifts barely intruded on the roadway still. All the melting has made the roads soft. 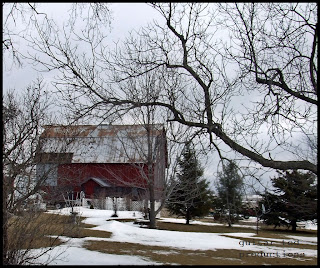 I was very surprised that I got this barn at all. I had seen it, fumbled for my camera, and by this time had rolled too close to some outbuildings which obscured my view. There were some gnarly Burr Oaks along the road, which also made the barn hard to see. As I rolled by, I had one chance to get the image, and I was sure I had blown it, but here it is! 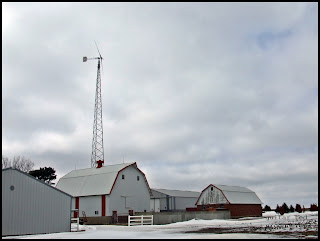 A "modern day" windmill. There are getting to be more and more of these privately held wind generators in the country. By the way, all shots here are from the saddle as I roll by. No stopping and framing the image for me!

I switched to black and white for awhile. The day just called out for it, and this old skeleton of a barn really fits that format, I think. 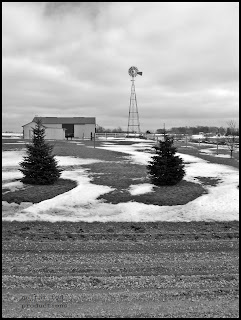 And finally, a rare, old skool windmill. These are also slowly passing away. Especially in working order, as this one is. The traditional windmill, at least in Iowa, is a rarer treat than barns!

The black and white shots instantly make me think of all the 1930's dust bowl pics.