I often find it strange at trade shows when one person is strictly sworn to secrecy and yet another blabs about it all publicly and isn't taken to task for it.  Once again, this happened at Frostbike. So, I figured what's good for the goose is okay for the gander, and here are the two bits that I was strictly forbidden to speak about.

First off, here is where I saw the information, so don't anyone get their panties in a bunch about it.  The first bit is that the tandem shown at Frostbike has a name: Powderkeg, and as anyone knows, "once you name it, you become attached to it!" (movie reference!) Anyway- the point is, by naming the project already, it would seem to further legitimize this as an offering that is coming down the pike at some point. Also mentioned was the thing hanging this project up- which is testing. Salsa wants to be assured this tandem can take what ya'all dish out, but there are no definitions or parameters set for such machines at this point. I suspect that will change soon. 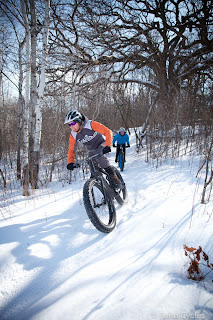 The other bomb in the linked article was sort of slipped in there without much fanfare, but check this out: (Quoted from the Dirt Rag article.)

"...a fat bike suspension fork from a major suspension manufacturer is going to happen soon. It will be spec’d stock on some Salsa fat bikes. No ETA as of yet, or much information at all. After months of test rides on various older forks that fit fat tires, Salsa is confident there is a place in the mountain bike world for a proper fat bike squishy fork. Probably a full suspension fat bike as well!"

Did ya get that? The one thing that holds back fat bikes from becoming full-fledged, year-round mountain bikes is lack of control over that bouncing front wheel. Did you catch the "major suspension manufacturer" hint? Yes- this will not be a cheesy effort. It is coming, and this single facet of Salsa's master plan will be a major turning point in fat bike acceptance and use.

Also, we all know that last year at Frostbike there was a big hullabaloo over a prototyped suspension fat bike that "was held back by lack of a proper front suspension fork". Do you see that finally becoming available?  It sure doesn't take a genius to put that "two-and-two" together, does it? Especially after Salsa kept putting the concept bike out there for folks to see at demos all throughout the summer last year.

In fact, I can't believe Salsa let that slip now. But keep in mind- I didn't say this. Dirt Rag did. So ya'all just as well move along now. Nuthin' to see here.......

Let's Not Forget Our History:

First it was On One's prototype Codeine that made some folks sit up and take notice. Slated to get 5" of rear travel mated to any 140mm-160mm fork.......wait. What? There are no readily available 160mm travel suspension forks for a 29"er, right? Then Specialized bombs everyone with the 6" travel bike, seen here.

While everyone may get the impression that these are "ground breaking" bikes, they are not.Anyone remember the Lenzsport Lunchbox? A fully capable, 6 inch travel All Mountain rig that I actually got to ride back in about 2007. Then the following year, LenzSport brought out the PBJ 7" travel rig. Both with pretty short chain stays too. Well made, highly regarded and still being made to this day. While Specialized and On One will seem "cutting edge", just keep in mind that it has all been done before.

What it does do though is legitimize "long travel" 29"ers as something viable. Whether or not riders embrace them remains to be seen, but 27.5"ers better be careful if these bikes do take off. And speaking of 27.5"ers, did ya see that Shimano just announced two wheel sets for the size? yep. That'll push that size further than it would have without Shimano. 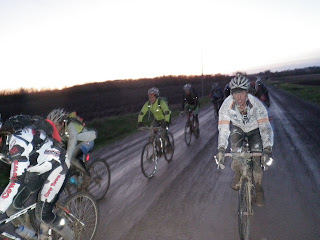 Yes- you read that correctly- Gravel Grinder News is going to be a-changin'.  Don't worry, if things go as I hope, it will become better, easier to use, easier to find events that are interesting to you, and perhaps even more gear reviews and what not.

The process to find a good template to switch to has already begun, and a draft for the plan has been made. Now I have to decide on some details, and then we'll be playing with the fine tuning behind the scenes.

It's been an eye opening week from my perspective as far as that site goes. I started it purely out of frustration that no centralized site existed to gather information for folks to see regarding the events out there. It grew to become far more than I intended, and far more used than I imagined. In fact, I only just figured it all out this past weekend. kind of a "Eureka!" moment, if you will. So, that's when all the planning started, and it will take a while to get everything in order. I definitely will post an announcement when it goes live.

Thanks to all the riders and promoters that have made Gravel grinder news a success over the  past 5 years.
Posted by Guitar Ted at 1:30 AM