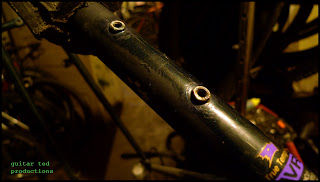 First day of Spring, I awake, I hear the wind blowing. I go and check on the weather and the temperature is 10°F. With the wind figured in, the windchill is below zero.

So, I am pretty tired of that. I also have extenuating circumstances to deal with at the time, so riding out of doors is nixed. I decided to hunker down in The Lab. I grabbed a couple of projects I had been putting off and started messing around with them. A couple of favors for a neighbor. Another one is going to end up becoming another gravel rig.

The gravel rig's genesis was as a touring bike made from True Temper tubing and is lugged. The clearances are generous and the frame isn't all that heavy. It is old enough that it has a threaded 1" steer tube fork, which makes life a little more interesting when it comes to stems. I've got a good plan here though.

The bike will eventually end up as a rig to test tires and wheels on. Due to the "mule" status it will have, I am not going to invest too heavily in the parts or the finish of the frame. Yes- the frame is getting re-touched a bit. There was some nasty rust on the top tube, (surface only), and the previous owner had done some touch up work that I figured I would take care of while I am at it. Oh......and I debadged the whole rig as well. 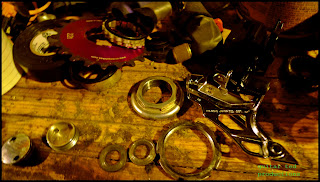 I puttered around with that until my hands started to hurt from the sanding of the tubes. The finish will be something that I've wanted to do for a long time on a bicycle. Camouflage. The base color of the bike is green, so I think it'll be the standard woodland camo kind of look, but it should be fun and as long as the thing gets covered in paint, I'm good.

Until the weather gets better though, I will have to be snapping to it and getting the last rig done here. The other two are all set, and I just need to paint and assemble this last old steel girl, and then I can hopefully emerge from hibernation and get some steady, regular miles in.
Posted by Guitar Ted at 1:30 AM

Love seeing the Endless cog on the bench!

Much the same going on here. Waiting for parts to come in. Fitting this and that in the garage. Finishing up my youngest son's Mtn.bike. Need to rebuild the fork on my 5spot. I'd say "Maybe this cold is a good thing" but I won't. I just won't.

SERFAS makes camo tape in either Army or Navy style. GET some!
Ari

Skinny tyre gravel bikes? Well, then you gotta let us know how the new fleet of thin gravel rubber compares to the Vittoria Pave (27mm Open)...I'd love to see how that stacks up to the Almanzo/Eroica twins, LAS/USH, etc.

I'm gonna have three options soon as well, and that's excluding the BWNN, which is a full-time fat tire singletrack bike now, as my growing fleet of Singular bikes gives it that luxury.

Just dropped a bunch of coin on some Grand Bois Cypres "Extra Leger" 32c tires for my latest Singular 'project', a beautiful new Osprey. But that thing will be fully gravel road-able with those tires (and I bet it'll be eerily smooth and fast).

Have a great weekend, Brother!

I recommend converting one of those skinny tired gravel bikes into a 650b tired gravel bike. Long reach brakes, 650bx42 hetre tires, yes. You can test out col-de-la-vie, pari-motos, so many great all-road tires.

@MG: Sounds awesome! You'll have to let me know what you think about those on the Lincoln area gravel. By the way....expect a call from me sometime soon. I've got something I want to run by you.

@.ss.: Unfortunately, I have not got a bike in the stable that is caliper brake compatible. All canti bikes, (and yes- I am aware of the Motolite option), and also- I feel that there are far more gravel grinders running 700c at this point. I just have not seen the 650B bikes at the events I attend and put on. In fact, I've seen far more 559ISO bikes than 594ISO bikes at gravel grinders. This makes it hard for me to concentrate any of my limited resources on 650B when I just do not see evidence that compels me to pursue reviewing stuff for that wheel size.

Given no limitations on my time and finances- sure. I would look into that in a heartbeat.

Yipsan cycles is letting me try a 650b rig for Odin's Revenge. I'm fitting a drop bar this weekend. While the snow flies outside.