Another chance for a 3GR was here the weekend before Trans Iowa, and with a prompt from Craig via e-mail, I made the early morning call to suit up, (in layers!), to get my sad carcass out on the road and meet up by 8:30am.  However; I wasted a bunch of time with indecision on what to wear, and I couldn't find the gloves I wanted to wear. Oh well! I did get out the door and going, eventually!

What I found was a stronger wind than was predicted, and it was blowing chill straight outta the North. Brrr! My ears were telling me that the Buff headband may not have been enough. Then I noticed ice! Wherever there had been puddles from the recent rains, there was now ice, and I was running those skinny Almanzo tires. I had to be a bit careful getting around a couple of spots there.  But the big problem for me was I felt sluggish and I had little time to get there!

Craig was waiting at the parking lot when I got there with three minutes to spare! I'm sure he was wondering if I would show up. But I did, breathless, and cold, but ready to ride on. We started out Northward into the chill wind and were chatting away like always.

Some of the early road out was freshly maintained and Black Hawk County had laid on some coarse gravel in a thick layer. This worried me a bit, as the Challenge Almanzos are not a comfortable tire in this sort of scree. I found a clearer line though, as we turned West, and then it got even better the further out we went. At first though, it was such a rattle being on that gravel that I thought I may shake my eyeballs out!

Ultimately we reached Camp Ingawanis and roads were so smoothed over up that way that they took on the appearance of pavement more than gravel roads. I also noted that it felt warmer than 30°F, but I think I was just being wishful! 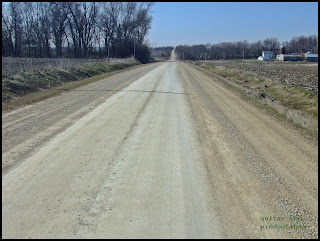 The roads continued to be really pretty nice. Dry, very smooth, and fast. This was a good thing for the set up I was running. When Craig and I got back in the vicinity of the end/beginning of our loop, that nasty chunk was there again, but it didn't last all that long.

When we got back to Cedar Falls, we hit Cup Of Joe's and then my feet finally warmed up! The chat and coffee was good, but soon it was time to get back on the bike and head for the shed. I was feeling pretty good considering the lousy legs I had to start out the day.

The ground had softened up in the Sun by the time I went back home and I noted that the wider HED rims definitely made the Almanzo work better on gooey grounds. However; I just can not get over how jarring a ride these things impart, and how much buzz I feel through the bike running them. It's what I call the "roadies gravel road tire".  If you want to keep a similar feel to what a road bike tire riding on the gravel would be like, this is your tire. Only on the ultra-smooth dirt/gravel are these really pretty nice feeling, in my opinion.  Oddly enough, on pavement they feel slightly sluggish and the aggressively diamond shaped tread makes strange noises at times.

But besides this, the ride was fun, and everything went well, so I can not really complain. Of course, that will be my last 3GR until May now with Trans Iowa coming next. I wonder if we'll see ice in May?
Posted by Guitar Ted at 1:30 AM

It sure is nice to see no snow and dry gravel :)