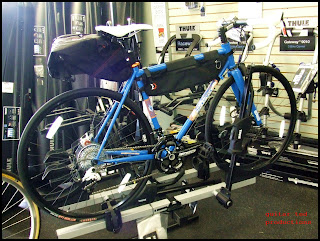 Background: I've worked in some form of retail now for over 40 years. I've been a door to door paperboy, collecting bills, I've been a grocery clerk, a jeweler, a car mechanic, and a bicycle mechanic. In every stop, I've had to deal directly with consumers. I base my opinions on my observations gained from "real world" experiences.

It wasn't really all that long ago when we were buying and selling in ways that had not fundamentally changed in generations. However; since the advent of the internet and its attendant devices, all that we once knew has either fallen by the wayside, changed fundamentally, or is still the same as it ever was. Let me explain.....

This was all started in my mind when I read the post on MTBR.com recently concerning "showrooming".  This is a practice where a consumer will use product on the shelf of a retail store to get a feel for it, try it on, or research the product through questioning the store staff, and then using a smart phone or another internet capable device to "shop" for the lowest price for that item on-line. The consumer gets hands on experience and expert knowledge and advice from the brick and mortar while getting the best possible price on the product on-line, often with zero shipping charges.

Sounds like quite the deal if you are a person seeking a specialty retail type object and want to spend the least amount possible. And who doesn't, right? However; this this is a zero-sum game in the end. Specialty retail cannot subsist under such conditions if showrooming becomes the norm. In fact, something has to change, or both consumers and specialty retail will suffer loss eventually.


What to do? Well, this all being new frontier, everybody from the consumer to the distributor to the manufacturer is being shaken up a bit. The solution being pressed into service by some is called "Minimum Advertised Pricing", or MAP, for short. It is a radical change from what we used to see, which is "MSRP", (Manufacturers Suggested Retail Pricing"), which we all know by now that no one ever charges or buys at. MSRP has pretty much been made useless. MAP, on the other hand, would seem to be a more logical solution, but even that has its limitations, since someone is always going to want to compete, and undercut that base pricing, even if only by a few pennies. Take price matching, as a good example of this. Only by the vigilance of manufacturers and distributors would MAP even have a chance of being something worthwhile, if even then. In the meantime, we are left to navigate a new reality in retail where there seem to be no barriers to information to consumers like their used to be.

Meanwhile bicycle shops have to buckle down and do their business in a more efficient manner, but more importantly than ever- they have to create and maintain real relationships with their customers. In all my years of retail, my observation has been that if you have people in place on the sales floor that are good at sales, but even better at people skills, then you will have business from customers because they enjoy the relationship. Just like any relationship, there has to be good listening, good communication, and give and take. In my humble opinion, bicycle retail is woefully inadequate at most of those things on the whole. If they were not, you wouldn't keep hearing all the "bad LBS" stories you can so easily find on-line or down at the coffee shop.

Yes, there are good bicycle retailers, but there are too many bad ones, indifferent ones, and ignorant ones. While there are some tough new seas to navigate with regard to the "new retail", there are some good, solid, old school lessons that many folks would do well to put into practice. The basics should never go out of style, nor be forgotten, while new ways of doing business are developed. In fact, fundamentals of customer relations has not changed one bit.

I tend to agree with your thoughts here,Mark,and I'm very very fortunate to have a good relationship with a good LBS in this area (first met them back in 2008 when I bough my first 29"er,back then they were 2.5 hours away from home...now they're 15 minutes,it was worth considering when we relocated).

I can't stress enough how nice it is to have a great LBS with a good group,it's invaluable...so much so,the Wife bakes em a cake once in a while just for being great guys :)

If I knew that I could walk into one of my local shops, ask for the parts I need and walk out with a fair price I would buy everything from them. That is so far from happening (even with 4 options) that it's comical. Not to mention most of the employees at all of them don't know what a tubular is or how to answer any question I might actually have.

nice guys or no at the LBS...pricing still has to be somewhat "in line". I would think that most people are willing and understand that the LBS would be a bit more expensive and be willing to pay that "extra" for the relationship and knowledge.
But, where I see the fail in some LBS is that they want to place that premium on all products. For example on chain lube or blinky lights. I've seen huge differences on these "off the shelf" items. The premium should be placed on more technical items where a sales person earns his/her keep with their specific knowledge and their skill conveying that knowledge. To me, that's what seals my relationship with my LBS. Seeing that premium on off the shelf items builds a bit of a wall with my LBS.
As with GT...it's just my opinion. In full disclosure, I've been in private industry in technical sales for 15 odd years and before that service/installation that influenced a lot of new equipment/services sales for 12 odd years.

I'm not involved with retail, so I have no firsthand experience, but I believe that "showrooming" dates back well before the advent of the internet. I remember a LBS employee, out on a group ride in England in the '80s, complaining about exactly the same thing with regards to discount mail order places that were around at the time. Without the internet, they advertised in the cycling press, sent out a new catalogue or price list with each order, and of course they had to take orders manually over the phone, but the basic modus operandi was no different. Of course, I'm sure that the internet has made it much worse. The mail order places can operate with fewer staff than before, allowing them to discount more, but a bike shop needs the same number of people to provide adequate customer service.

I believe that mail order does have its place. My LBS (GT's employer) is great, but for various reasons they simply cannot obtain every cycling product that I want. That said, after years of experience with both, it is my preference these days to try my LBS first, and use internet/mail order only as backup. Sometimes I even do the exact opposite of "showrooming", and research products on the internet before asking my LBS to get them for me. Why? For exactly the reasons GT states - good relationship, communication and service.

We had a problem with "showrooming", back in the 1990s, at the shop where I worked. In those days, people shopped through the Colorado Cyclist, Performance, Nashbar, etc. catalogs, then came to our store to try on the shoes, gloves shorts otr whatever. Once they knew their size, they would go home and order the item from the catalog.

It was frustrating, and we would have some rather frank and open discussions with people about what they were doing, at times. But, for most of them, the bottom line was that they could buy things from those catalogs at the same price we were paying our suppliers, and thus they avoided even a minimum markup.

I buy most of my stuff online. Anything that I actually need to handle before purchase (helmets, clothing, etc), I buy locally. If I am going to use the shop's time and inventory to my advantage, I feel it's only right to do business with them, in return.

I've had mostly the same experience as rodeonpurpose. I'm fine with paying the premium for using a LBS, but so rarely do they have what I need, it's almost not even worth bothering for parts. I have and will continue to use them for service, fitting, etc. Another issue I run into a lot is that many shops in this are cater to a certain demo (mainly high end roadies, triathletes, etc) that I am way out of (rigid, SS, mtber), so even less product or knowledge in the LBS applies to me.

I've found one shop locally that I will continue to use, but it took a lot,of shopping to figure out.

My approach is this. If I can do the research online with resources available there (no 'showrooming') then I buy online. If I need assistance from LBS in making a decision about a purchase then I buy from an LBS. In other words, if the LBS can add some sort of value to the transaction, then I don't mind giving them their slice of the money I dole out. I don't like paying a middle man just because s/he wants to be a middle man.

I think bicycle shops should be focusing on those products, services and clients that can't service themselves online. Figuring out that new business model will be the trick for each shop and ultimately I think there will be less shops (which wouldn't bother me). The LBS has to figure out what services/products they can do a better job supplying than a website. Some people need alot of help buying a bicycle and some don't need any help at all.

For example, I do most of my own maintenance work - apart from building my own wheels - and I don't buy "wheels" - I like them hand built. So that is a purchase I personally will always do from someone standing at a counter in a building. That purchase may or may not include components that go into wheel. I know there are folks selling custom hand built wheels over the web as well - but I'm not mailing a wheel to do a correction true if needed after the first few kms - but that's just me. And I'm in Canada and shipping is never free up here!

Fixing prices is not the answer for the customer, retailer or manufacturer.