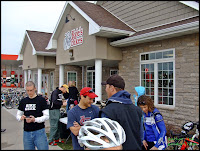 Friday night: Stayed up a little too late getting everything organized for a 6 am or earlier departure from the house. I had been eyeballing the weather to ascertain the rain chances, but decided to forgo any rain gear and to not consider taking the BMC. I would later be quite pleased that I took the Vaya.

Saturday Morning: I awoke at just before 5am to get some breakfast in my belly. Three eggs over easy, some water with electrolytes, and a cup of coffee. Loaded up the truck and hit the road at just before 6am. It was apparent that we had received some rain during the evening, but the clouds seemed broken up too much for any sustained rain fall. I ran through some showers on the way down, but they were very light and barely got the windshield wet. I decided to wear a Craft Windstopper base layer with long sleeves, my long sleeved Pirate Cycling League jersey, Twin Six bibs with black Bontrager commuter knickers over that. A pair of wool socks and the Vittoria shoes went on the feet. On the head went my Bell Ghisalo helmet with a tech cycling cap and a Buff head band to cover the ears underneath that. On the hands I wore some Answer full fingered gloves. This get up kept me perfectly comfy during the windy 60 degree day. I arrived at Kyle's Bikes by 7:55am, just in time to meet up with my team mates. Our start time was slated for 8:57am, so I had a bit of time to chat with folks I haven't seen for a long time.

Kyle's Bikes, the Renegade Gents volunteers and the riders gathered are all great folks. The sign in process and the way the event is run is just seamless. Thanks to all the volunteers! You folks deserve it for being great to us racers and running the show so excellently.

We finally got Bob's drop bag, (a messenger bag), stuffed with our extra bottles, food, and beer and then we made the 10 minute ride to the staging area. The weather was mostly cloudy and there was a strong gale coming from the South-Southwest at the time of the start. We knew from the past Renegade Gents races that we would be going primarily North to start out with on the 65 mile course. Big tailwind out, sufferage back. Well, that's the way it goes sometimes! We were okay with that and ready to just have some fun.

The way out of town has about three miles of pavement till you finally reach gravel. There was a new roundabout in place that made things "interesting" when dealing with the traffic, but we managed to get out of town just fine.

My team mates, the same from the previous two years of doing this event, are a diverse set of fellows. Steve, our captain, is heavily into training for the upcoming gravel season, including T.I.V9. His day job is taking care of a computer network. Sam is a chef, a musician, is writing a book, and has his own business. Bob is a bartender and had to work the previous evening with only three hours of sleep before the event, and David works for a corporate firm. Oh! And of course, I am a bike mechanic and "International Man Of Mystery", (according to some!)

Well, we got to the gravel and the speeds were high, and the pace was a bit hot as well. I was working a bit harder than I would normally go, but I wasn't being taxed too heavily. The route was straight North for the better part of 20 miles with a few early jig-a-jogs. The gravel was really dry! Like summertime dry, and dust was blowing up into the air from the strong tailwind. The surface of the gravel had been maintained and was loose, usually fine, and sandy. This meant you had to really watch your lines as getting off the packed in tracks slowed you down, but more importantly, upset the handling of your bike.  This was why I ended up being glad I brought the Vaya. Its wider tires helped float the bike better instead of making the wheels cut into the surface. Guys running narrower tires were fighting the gravel more and had more trouble swapping lines.

The ride out was pretty uneventful and went by fairly quickly with the great tailwind push. We were chatting and having a good time, occasionally passing other teams and enjoying the fantastic, warm Spring temperatures. Eventually we ran out of Northward course and turned East to fight the onslaught of cross wind. The wind was so strong it blew dust straight across the road like a ghostly snow. My Edge wheels were sailing a bit and I was careful not to put anyone too close to my downwind side for fear of running into them if there were to be a sudden gust that might push me sideways.

Then there was a short Southward section on pavement into the checkpoint town. It was a taste of the things to come, we were all thinking, and heads were down and straining as we came into the oasis of the checkpoint for a bit of recovery. I was certainly looking forward to it, as I was getting quite hungry by this point! Sam was kind enough to pack a chicken wrap which he and I shared along with a can of Four Loko and a few "cutie" Budweisers that Bob had brought for us.

Eventually "fun time" was over and we set out for what we were expecting to be a really tough 33 miles back to the finish line. The beginnings of the route back were Westward, so we were working a crosswind. Steve and I shared pulls and we quickly gapped off our other team mates. When we found the turn South, we pulled up to wait for the others and then continued the march South.

It was brutal, but I detected a lessening of the blast's force and a slight shift Westward in its direction. Hmm......maybe we would have it easier than I thought? I do know that at this point Bob was really starting to suffer. The 9 hour shift the night before and little sleep was catching up to him. David was hanging back with him as much as possible and Sam was somewhere between them and Steve and I when we pulled up again at a Eastbound turn. We waited again to come back together and then took off again. This stretch went on for several miles and with the shift in the wind's direction, it was a quartering tailwind. The course featured some rollers here, (the only place in the rural area of the course that wasn't flat), and as it turned out, was the best part of the race for us as a team. Bob wasn't stopping when we pulled over to take a nature break and allow him to catch back up. He walked to stretch his legs and moved on up the road. We ended up catching him before the last big Southward push and rode along with him for a bit. Of course, we didn't get too much further up the road before we were obliged to make the right hander Southward again, and Bob fell off our back again in the face of the winds power.

After a bit, David came up and asked that I drift back with him and help Bob in. We were going to finish and had nothing to prove, so it made no sense to push a team mate so hard. David and I rode along with Bob then, and we finally saw Sam and Steve drift back with us. Steve and I took turns pushing Bob up some of the final climbs.

Bob gutted out the big hill up the pavement on his own though. He toughed it out all the way into the finish with all of our team's respect. What a ride! Especially on an "empty tank", energy-wise and sleep-wise.

We collapsed at the finish, proud of what our rides were that day and glad to have spent time in each others company. That's what the Gent's race is all about to me. Teamwork, fun, and a great day out on a bike. I think, from what I gathered anyway, many of the rest felt the same way. A good accomplishment in less than ideal conditions on some tough, albeit flattish, roads.

Afterward many folks went to a local restaurant where a room had been reserved for the riders to gather and share stories of the day with each other. I got to my truck and looked at the time. HooBoy! I had to hoof it back home to make family pizza night, so I skipped out and drove home. We spent more time out there than I thought!

A Word On The Bike:

This was a big test for the new-to-me Vaya. A metric century in windy, very dusty, and loose conditions. Here are my bullet points on the thoughts on this bike after the event...

And that's a wrap on the Gent's Race for 2013. Many thanks again to everyone involved in volunteering and organizing this event. There were 36 five man/women teams this year! Thanks to my team mates: Sam, Steve, David, and Bob. You guys made the event a blast for me. I am honored to have ridden with you again.
Posted by Guitar Ted at 1:30 AM

Was great to see you Saturday, my Brother. Wish we'd have gotten to hang out afterwards, but I understand your need to get drivin'.

I haven't had any real on line access as of late so I hadn't seen that you were doing the event. Otherwise I would have said hello.
I rode up with Bob and Sam.
Did the event with a mixed group of folks that I met for the first time that morning.
Over all a great day on the bike!
Cheers

As always, GT, it was good to see, and especially ride, with you again. Glad we had a bit of a chance to talk. Look forward to seeing you in a few weeks and then again at GTDR in July.

what saddle bag is on the vaya?

@saltheman: It is something made by Topeak, I can't recall the model name. I think it is an older version of this: http://www.topeak.com/products/bags/AeroWedgePack_medium_Velcro