I've written reams about cues for Trans Iowa, so I won't get into all the finer details of things. However; there are a couple things I wanted to mention about cues for this year that are things you, (if you are in Trans Iowa), should understand.

First off, there will be a LEGEND provided for the cues that will include a LOT of info that you will need to keep throughout your ride in T.I.v14. This cue sheet page will come with the first set of cues and should be at hand for all the event, SO DON"T THROW IT AWAY OR LOSE IT!

It has the phone number for calling in when you are dropping out. It has the RE-ROUTING PROCEDURE on it, and I am going to try to get the T.I. Radio number on there as well. All of this will, or MIGHT BE , necessary IMPORTANT information that you will need to protect and keep track of.

FINALLY- and of great importance: THE CUE SHEETS ARE EASILY DAMAGED BY MOISTURE! So, be careful handling them with wet gloves, for instance. Don't spill your energy concoction on them, and don't let them get wet from precipitation. Just don't let them get moist! It will be BAD if you do.

Cues are printed on a little thinner paper than we used to use the past couple of T.I.'s in order to save some money, so they should be handled with great care. We used to use straight up typing paper, and this stuff is heavier stock than that, but not by much, so just be aware of that. Cues will come in zip-loc type sandwich baggies. There isn't anything special about these, and they are NOT WATERPROOF! 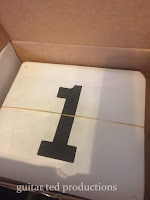 I was going to personalize the numbers this weekend, and it would have been a perfect weekend to do this, since it was really bad weather outside. However; a certain rider e-mailed me to say he "might not be there" since this individual has to deal with an injury sustained last month and isn't sure of himself for the event.

So, I put that off for a bit, I sent a reply asking for a decision, and hopefully I'll get the courtesy of a solid commitment one way or the other today. I mean, why even bother sending me an e-mail like that? It's weird, and it doesn't do any good for anyone. In my opinion, if you are iffy physically you shouldn't come to try a 345 mile bicycle race under stressful conditions.

But what do I know?

The weather for Trans Iowa this year will start coming into focus now with about 12 days to go. Right now, they are saying Winter will finally die and a brief Spring time weather feel should appear.

Before I get ahead of myself here, I want to address the "weather legend" concerning Trans Iowa. This all got started with Trans Iowa v2, which no one finished.

It got to be kind of a thing there for a while. T.I.v3 was beautiful, T.I.v4 was awful! Strong winds and snow at the start of that one. Then T.I.v5- beautiful, maybe a tad windy, T.I.v6- terrible weather, and by this time the legend of the "awful even numbered Trans Iowas" was solidified. T.I.v7 was pretty nice, but then something started to swing the other way. T.I.v8 looked to be terrible. The thunder and rain carried on right up to before the start, but by mid-day that Saturday, the roads were perfectly fine, and wind was not a big deal. Wait! What? An even numbered Trans Iowa that was nice?!

Then v9 was what everyone expected, very nice, and v10 was tough, with bad wind and a tremendous squall line of thunderstorms overnight. But that was the last bad even numbered Trans Iowa.

V11 was as bad as it gets and the event was over before it started, really. V12 was perfect! So much for the curse of the even numbered TI! V13 was super tough, in terms of weather, so it stands to reason that this TI would be quite nice.


Hey! It could happen!

The main thing is, I don't want to hear anything about the "even yeared curse" anymore, because, obviously, it doesn't hold true. Add to that the extended forecast which says the high temperature for Saturday the 28th will be 71°F. Yeah.......instant Summer!

My only concern with this would be that this may be "rush hour" for planting activity. Tractors, trucks, semi-tractor trailers, ag equipment, all running to and fro in a frenzy to put crops into the ground. I just hope traffic isn't a concern for the riders. We will see.


And of course, the forecast will change five times before T.I.v14 anyway. Stay tuned!

Thanks for including the dimensions of the cue sheets.

Will the mileage on the cue sheets start back at zero with each new set handed out at each check point, or will they continue sequentially until the end?

@Robert Ellis- Cue mileage resets at each checkpoint/with each new set of cues.