These early morning rides on the weekends have been working out pretty well. I get done fairly early and have the rest of day with the family or to get other stuff done. Why haven't I been doing this all along?

It just goes to show you- You are never too old to learn something new.

Anyway, the spectacular weather continues on and shows no signs of letting up. I've seen it snow by this point into October, and generally it is getting pretty chilly at night, but this year? It seems like Summer just doesn't want to let go yet. Humid, hot air is still hanging around. Despite the fact that we have a lot less daylight now. Heck, it was in the low 60's when I started my ride. That's usually more indicative of the high temperatures for this time of the year.

So, I thought I'd do a loop this time from the house. Starting South, hitting up Griffith Road, heading East, then end up coming in on Foulk Road from the South and maybe a little fiddling around before heading back on the CVNT toward Evansdale and bike paths home. That was the general idea anyway.

I decided to ride the Black Mountain Cycles MCD on this ride. I was testing some handle bar tape, and I was searching for an answer which had been evading me over the past few days. Specifically, where was that creak I had been hearing? It was gone. I swapped out the WTB CZR wheels from the Noble GX-5 which made the creak disappear on that bike. Would the creak follow the wheels? That's what I was after here, but so far......nuthin!

There is nothing worse for a mechanic than to have an issue disappear without an understanding of how it went away and where it came from in the first place. It can be pretty frustrating. On the one hand- hooray! Right? The noise is gone. But on the other hand, I don't know the answer to the mystery. Unsolved mysteries are a thorn in a mechanic's side. Oh well...... 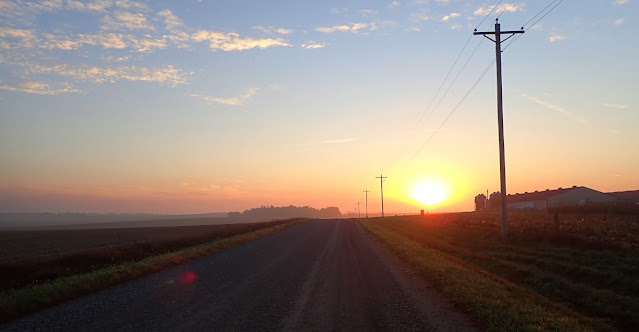 So, I pedaled onward and just enjoyed the show that the Sun and the mists were providing. It was pretty spectacular! There was zero wind. I mean it was calm! The gravel was in fantastic shape after all the harvest traffic had pounded it into nice lanes which made for fairly easy riding. The recent rains helped that along, no doubt.

Washburn Road turned me into Ansborough and eventually I turned East again on Griffith. I was feeling okay, but something felt odd at times, then it would go away. I'm not sure but I think my tire pressures were set a bit too low. Of course, in my rush to get out the door, I did not check them. My bad. But whatever it was, tires, or just being distracted by the dream scape I seemed to find myself in, I don't know. I went back and forth between feeling great and feeling weird things. 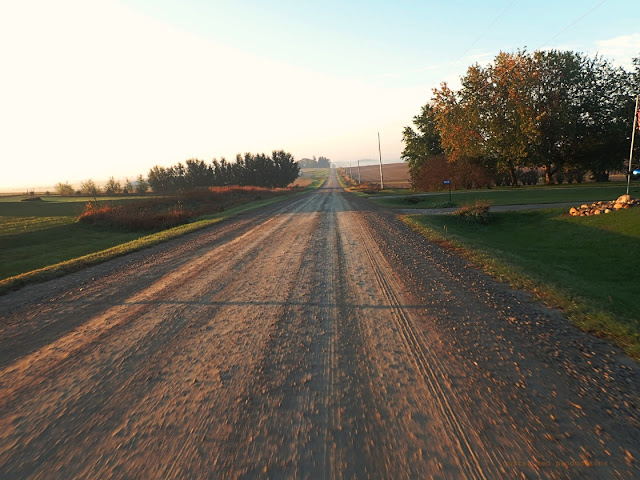 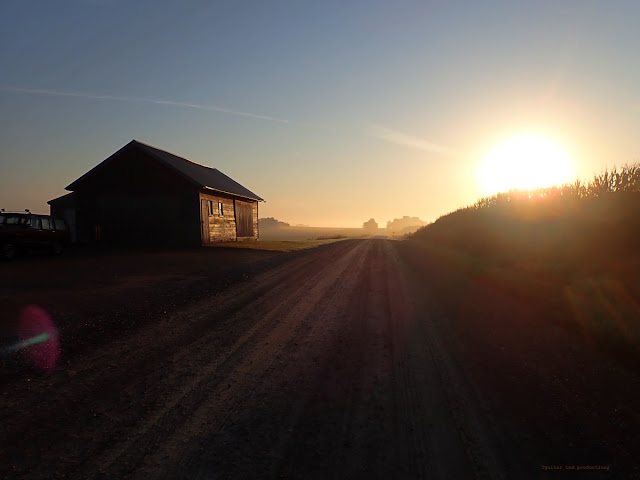 And even though I was making headway, and not going slow, the Sun seemed to be taking its time to rise. I would keep seeing these spectacular scenes and figured, "Well, this fog will burn off soon, the Sun will get up, and I can put away the camera and just ride.", but it kept going on and on, seemingly.

I took Griffith Road East to the place where it "T's" out into Hammond Avenue and then headed South to Quarry Road which I then went back East on. Still there was no wind. It was just an amazing, beautiful, awesome morning!

The Sun finally started gaining altitude and the mists were now lying in the valleys of the various streams and creeks in the area. I could finally see clearly through my Rudy Project glasses now. Earlier on the mists kept a slight fog on the lenses, which probably contributed to my issues with feeling oddly on the bike. Now things were sharper and I didn't have to second guess what it was I was looking at.

Now the Sun was up and the mists were gone. It was a blue-sky day and the temperatures were perfect. Just cool enough that I needed arm warmers, but otherwise I was in Summer riding gear. Still, no wind! Amazing day out there!

The harvest is still ongoing. I'd say about 60% is out of the fields now. There still are a lot of fields to be harvested yet, and I was a bit surprised by the lack of activity in the fields. Although, it had rained all night long in this area only a day or so ago. Perhaps it was just too wet to get the big machines out there?

The gravel roads were pretty much dust-free. A rare treat in normal times, but especially so this year as it has been so dry and dusty all year long. It was odd seeing a layer of moist dust stuck to my tires all the ride long until I hit pavement.

Well, eventually I did see some harvesting activity. Maybe up a little too closely! The machines these farmers use nowadays is so enormous that I considered bailing off into the ditch as one combine passed me by. Wagons are said to now hold more grain than a semi-tractor/trailer can tow away. The scale of these machines is kind of hard to convey, but that tracked wagon above? It was probably as high as a one story house.

I ended up detouring off Foulk Road after crossing HWY 218 because, well, it is just a bunch of pavement. Not very interesting. A side trip down McKellar Road and then along a bit of Weidan Road was far more interesting than that!

Then it was bike path all the way into Waterloo and eventually back to the house. About 2 3/4's hours of riding on one of the best mornings out so far. Glad that I made the effort to get out of bed!