Wednesday was to be a showery, cooler day by the afternoon. In fact, a few showers blew through the area early, just after Sunrise, and then it cleared off by about 9:00am. I wasn't going to wait to find out if the weatherfolk were wrong or right. I went and got my things on and grabbed the ol' Tamland Two for a ride South of town.

The wind was stiff. Something above 20mph and at least a bit more out in the open, straight out of the Southeast. I decided to use my standard Southern jumping off point of Prairie Grove Park to go South and East a bit until I ran out of time, then turn around for a short, fast trip back to the truck.

I had to be back shortly after noon to join my daughter for lunch, then I had other stuff to do for the rest of the day. So this little window had to work out or I was going to end up with nothing. Fortunately the day appeared to be beautiful, despite the constant wind coming in my face to start with.

This ride was all about testing the Topeak Gravel Bag and the Tubolito tube I have still in the back tire. (More on that at the end of this post.) I don't much ride tubed tires anymore, and riding into that headwind, it was easy to blame my work on tubed tires which I perceived as 'holding me back'. The fact was that it was the wind. As I have said many times, 'Never judge a tire's performance on a windy day!'

Going South on Ansborough wasn't too bad. Sure, I was working against a pretty stiff wind, but at least the gravel had been pulverized by the big harvest machinery and semi-tractor trailers which had obviously been doing their jobs recently by the looks of the fields. Every field down this road had been harvested, both corn and soybean fields. 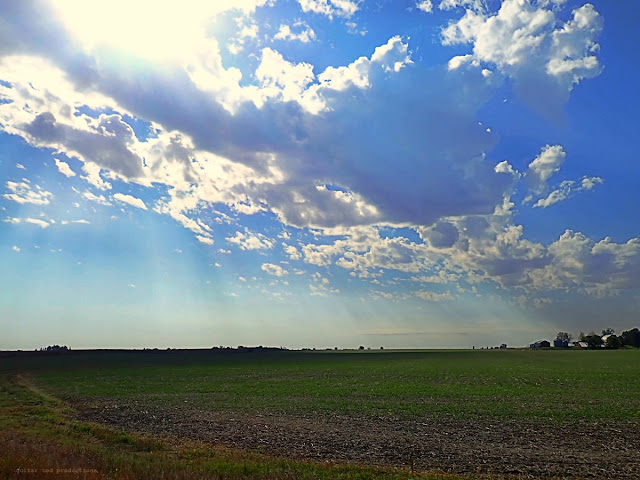 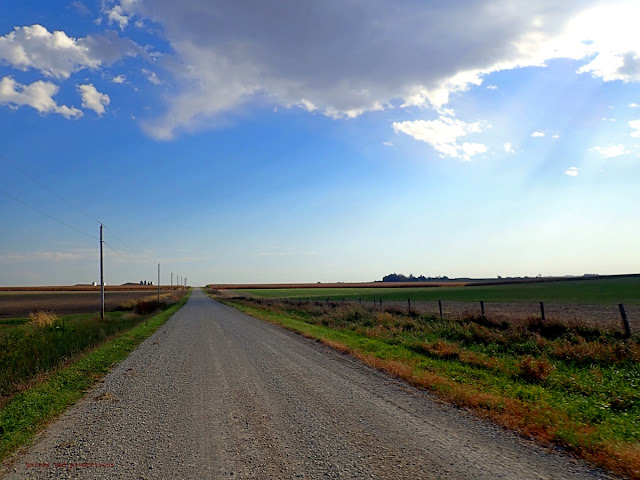 The Raleigh Tamland I was riding has always had this odd quirk. Whenever I ride into a wind, or sometimes a crosswind, it begins to moan and whistle at a low pitch, varying with wind speed. I suspected that this was wind blowing across the opening at the bottom of the steer tube, and when I swapped over to the current Fyxation carbon fork, it didn't go away. It was just a bit different tone was all.

Anyway, none of my other bikes really do this at all or with any consistency. Only the Tamland. So, as I went East, I got this mournful low tone going and it kind of fit the scenery and the time of year. Then when I turned away from going East- poof! That sound was gone. But the landscape was the same. Barren. Devoid of crops now. This laid bare the nature of this part of Iowa. It is a rolling prairie. A vast, mostly treeless plain. We usually don't think of our state in this way, but it is easier to do so once the harvest is in.

This is the time of year when the sky looks bigger, the land broader, and the sound of wind is the only thing that accompanies the grit of tires on gravel. The animals are all gone with the exception of a hawk or a few crows who fly silently on the wind. The 'neeker-breekers' are all silent now. Their life cycles completed for the year. It's coming up on "Brown Season" when everything falls silent and an eerie presence falls over the land until Winter covers that up with a white blanket of snow.

It was a quick ride back to the park, and my truck, with that stiff wind at my back. The tubed tires didn't hold me back any, and in fact, had I not known a Tubolito was in the back, I would have thought that I had a rear tubeless set up. It rides that smoothly with that tire. Even despite the few miles of fresh, deep crushed rock on Aker Road on the way back. It was gnarly loose! I am really glad I didn't decide to roll out that way!

This ride was supposed to help me with my final take on the Tubolito tubes, but I received an email from my contact which stated that maybe my ultra-light Tubolito which kept going flat within 24 hours was perhaps defective. I am expecting a new replacement soon. So, stay tuned on the final say on those orange things soon.

Note: See the Standard Disclaimer page to understand my relationship and philosophy on products and services I receive and use for riding and which I talk about here on the blog.